a charming daredevil - Worth the Risk (Butterfly Harbor Stories #11) by Anna J. Stewart

"I’m always thrilled to visit Butterfly Harbor, because every story is so wonderfully written. [...]
I’m not sure what will happen when the last of the stories have been written, but I’m hoping it’s not anytime soon." Cheryl, Goodreads 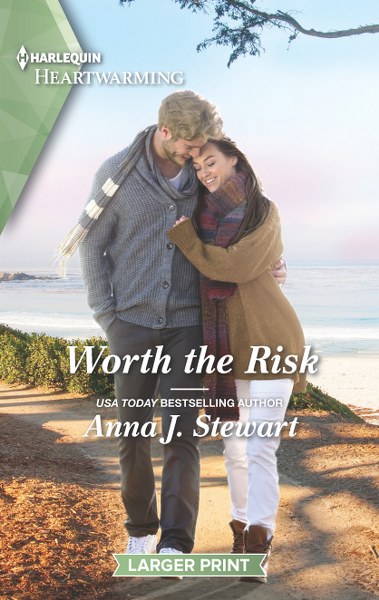 Description:
Published: December 28th, 2021
She’s playing it safe…
He’s anything but!
Famous race car driver Declan Cartwright is only in Butterfly Harbor to recuperate from a devastating crash. But when food truck operator Alethea Costas literally falls into his arms, he realizes the sleepy seaside town has more to offer than he imagined. Alethea is drawn to the charming daredevil despite her cautious nature. Can he show her that taking a chance on life—and love—is worth the risk.
EXCERPT

Moving across the large front yard was an adventure in tetanus avoidance. The property was a mess, from the overgrown yard to the tarp-covered something that had probably been a car in a previous life. Junk and debris, from car parts to plywood scraps, had piled up to the point of merging into an unidentifiable blob. Add in some nuclear waste and it would probably form into a comic book super villain.

The whirring continued, this time accompanying an energetic, male and very off-key declaration to “shake it off.” Stifling a laugh, she approached the door and poked her head just inside.

A dark figure dropped straight down like a giant spider splayed on an industrial metal web.

Alethea yelped and jumped back. She’d have landed right on her butt if a large, rough hand hadn’t reached out and caught hers. Rather than steadying her, she found herself yanked forward and into the solid embrace of her caterwauling mystery man.

“Oh, wow.” She grabbed hold of his shoulders as he swayed, feet dangling a good few feet off the ground, at the end of a harness and pullied rope. His hold on her was steady, sturdy, and, as he shifted his grip, seemed to be sending tiny little shock waves rocketing through her system. She blinked, clearing the surprise from her eyes and drew him into focus.

Long, shoulder-length dark blond hair. A good three days growth of beard covering what she suspected was a stone-carved jaw. His gray eyes reminded her of a summer storm, with lightning bolt sparks of amusement curving his full lips into an entertained smile. “Wow.” She said again as the flush warmed her face.

“Sorry to scare you.” He released her, reached down to unhook himself from the rope, and still hung onto it while he lowered his feet to the ground. “Lost my hold on the rope. You all right?”

“I’m fine.” She stepped back, tucked an invisible curl behind her ear and shoved her suddenly shaky hands into her pockets. His voice carried a hint of the South and coated her roughened heart like smooth molasses. She took a deep breath and wondered when the combination of leather, sawdust and sweat had become appealing? “I called out from the house.” She had to shout over the music. “But I guess you didn’t hear me.” She inclined her chin toward the Bluetooth speaker that continued to blare. “Nice music.”

About the author:
USA Today and national bestselling author Anna J Stewart writes sweet to sexy romances for Harlequin and ARC Manor’s Caezik Romance. Her sweet Heartwarming books include the Butterfly Harbor series as well as the ongoing Blackwell saga. She also writes the Honor Bound series for Harlequin Romantic Suspense and contributes to the bestselling Coltons. A former Golden Heart, Daphne, and National Reader’s Choice finalist, Anna loves writing big community stories where family found is always the theme. Since her first published novella with Harlequin in 2014, Anna has released more than forty novels and novellas and hopes to branch out even more thanks to Caezik Romance. Anna lives in Northern California where (at the best times) she loves going to the movies, attending fan conventions, and heading to Disneyland, her favorite place on earth. When she’s not writing, she is usually binge-watching her newest TV addiction, re-watching her all-time favorite show, Supernatural, and wrangling two monstrous cats named Rosie and Sherlock. You can read more about Anna:
Website * Goodreads * Facebook * Twitter * Instagram * Bookbub * Amazon
Author's Giveaway
a Rafflecopter giveaway
Posted by CCAM at 4:10 PM

I enjoyed the excerpt, thank you.
Happy New Year!

Thank you for shining a spotlight on WORTH THE RISK!

thanks for sharing all the goodness
sherry @ fundinmental

I liked the excerpt

I enjoyed the excerpt. Thanks for the giveaway!

I enjoyed the excerpt and Worth the Risk sounds like my kind of book! Thanks for sharing it with me and have a great week!

A perfect curl up by the fire read!

The cover is comforting.

What inspires your book plot ideas?

Where do you get your ideas?

I love the cozy cover !