"Romance readers who enjoy a friends to lovers troupe story will want to check out this book. I can't get enough of Lauren and her books. I always make time to stop reading my other books to binge read her books. They are guaranteed to bring a smile to my face." - Cheryl, Goodreads 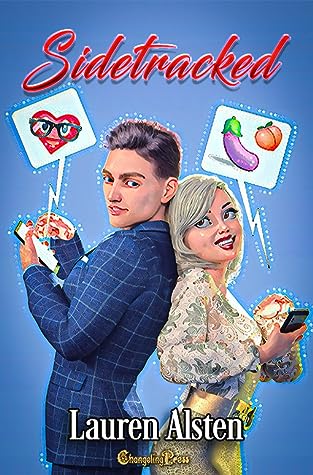 Description:
Published: December 31st, 2021
Librarian Allison Callahan, aka “Encyclopedia Allie,” has always loved her steadfast and dependable best friend Dane. She’s just never admitted it to anyone, including herself. But Dane keeps trying to kiss her, and it’s changing their relationship status from friend-zone to danger-zone. Sure, Allie wants more, but what if Dane finds out she likes her hanky panky with a side of spanky?
He’ll freak, that’s what. So she rebuffs his advances, tries to shake things up… and unbeknownst to him, discovers one of his best-kept secrets.
Meanwhile, Dane is so frustrated he fantasizes about taking Allie over his lap. A good spanking would serve her right for refusing to acknowledge what they both already know: they’re perfect for each other. But he’s so busy trying to make partner at his law firm, he doesn’t notice something’s a bit off about his bestie.
Between the shock of the secret she never knew and her lukewarm launching of the library’s virtual book club, Allie’s ready to let loose. At her and Dane’s high school reunion, it’s clear they’re ready to take the next step, but after a red-hot night of lust and love, will the next morning’s Walk of Shame ruin everything?
EXCERPT

My track record with men in general is sketchy, and with Dane specifically, it’s abysmal. One visit to his frat house at Harvard proved we weren’t meant to be. My teenage crush on Criss Angel came in handy, because nobody suspected I faked throwing back four shots. Only the fifth one was real, and I gagged. Malört is evil. I started acting tipsy, figuring it was now or never. I sat next to Dane, tried to French kiss him, and when that didn’t work, went for broke, pitching face-first into his crotch. Told him I wanted to lick his Danesicle. Disgusted, he picked me up and put me to bed -- alone. I left him a note in the wee hours (claiming Malört Memory of the prior night’s events) and slunk back home to die a private death of mortification.

I used to think I was a prude, but after that, I knew Dane is the most sexually conservative person I’ve ever met. Even the word sex makes him cough and sputter. Tara’s extremely open, I’m more the “keep it under wraps,” type, and Dane -- well, even his current bedroom furniture is prudish and perfunctory. Square, plain. Mission-style. As in “missionary.”

For now, I drag my mind out of the gutter and prop myself up with a pillow. Watching him sort and pack soothes me, his biceps flexing under the weight of heavy law books he’s dumping into random boxes. The sight of his corded forearms, the biceps hiding inside his tight Henley, the curve of his muscular thighs filling out his jeans. All these things turn me on, but tonight my heart races because I really need to sell Dane on the reunion thing. I don’t want to play the loner librarian, especially if Thomas shows. Overthinking is my specialty, so I swallow the lump of reticence to cue up my rehearsed Reunion Ruse. By the looks of it, I’m not the only one about to take a chance.

Dane is going to try to kiss me again. He always angles for a peck, usually on the cheek, and he’s predictable as ever: his face gets this dopey, hopeful expression, followed by the twitch of his left eyelid. It’s kind of cute, considering.

Mr. Twitchy would freak if he knew how sexually conservative I’m not. To him, I’m still Encyclopedia Allie, strait-laced, straight-A and headed straight for 2.25 kids in a white picket fence suburbia. Dane would never look at me the same again knowing I have less-than-vanilla preferences, and while I don’t think spanking is that strange, he would. People who color outside the lines, like my sister, make him uncomfortable. If he knew my preferences, he’d run. And if he did? I’d die.

So Dane trying to kiss me? Not going to happen. I love him too much as a friend. To him, I’m a nice, vanilla girl, and I want to stay that way, even if it means one day seeing him with someone else.

I still fantasize about him taking me over his lap and whipping my ass to a cherry red, though. I just keep that freaky little fantasy to myself.

Dane grabs two handfuls of books from one box and dumps them into another. He’s trying not to make his machinations obvious, but I know he’s just waiting for the perfect moment to strike. He’s always so damn polite. But as organized and fastidious as the man is, he doesn’t know jack about weight distribution.

“You should split your legal library into smaller boxes so they’re not as heavy.”

Dane snickers, lifting the large box laden with neatly stacked statute books inside. The box bottoms out before he hits the hallway. At this rate, the movers won’t have much to move come Sunday, because it will still all be in piles on the floor.

With his hands on his hips, Dane acts like he’s mad. His steel-blue eyes narrow. It’s a ruse. He does hate to admit he’s wrong, but instead of grouching, he pauses. Wrings his hands, approaches the bed slowly. I meet his gaze, and his eye starts its preemptive twitch. Here we go.

About the author:
When she’s not obsessing over her latest characters and dreaming up meet-cutes for future books, Lauren Alsten loves photographing wildlife while hiking under a warm sun and bright blue skies. Her writing journey began with A-list movie star fan fiction, but these days she prefers penning humorous tales of emotional upheaval served with a side of snark. She currently lives with two ungrateful cats who never lift a paw to help around the house.
Website ** Goodreads ** Facebook ** Instagram ** TikTok ** Twitter
Author's Giveaway
a Rafflecopter giveaway
Posted by CCAM at 10:55 AM

One of my favorite tropes!!

Thank you so much for sharing! <3 This book was so much fun to write! I hope you like it. :)

I like the cover and excerpt. Thanks for sharing.