Buddy flick epic fantasy! The second in the Assassins of Landria series from the award-winning, bestselling author of Scourge: A Novel of Darkhurst and The Chronicles Of The Necromancer books! 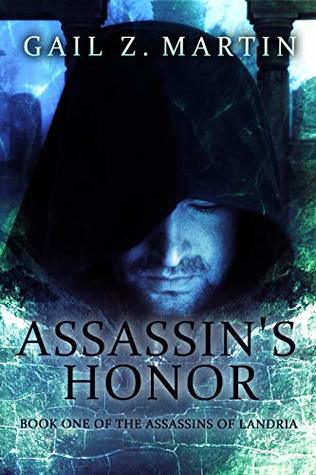 For a loooong, long time I wanted to read Mrs. Gail Z. Martin's books. So, I jumped to the occasion offered by this tour. It was one of my best book decisions!

Before finishing Sellsword's Oath I already made some mental notes about what I should tell you. They were good notes! But, my wits plummeted when reading, at the end of the book/s, the author's "Afterword". I swear that Mrs. Martin had copy-pasted my notes! It doesn't matter that she wrote them first. Now, I must change everything.... let's see... so, instead of telling you that Assassins of Landria #1 and #2 are "epic fantasy without the epic length" with "interweaving plot threads",  I tell you the following:

I really liked the main characters, Shadow Assassins: Ridge and Rett, and their camaraderie, their brotherhood.  They are not invincible just very close to that. Well prepared, smart enough and lucky to have and gain talented, faithful friends, they get to live through the continuous chain of challenges. And they keep (and adapt) their humor and banter. They are deadly guys who do what they have to do to defend their king whilst saving innocents. 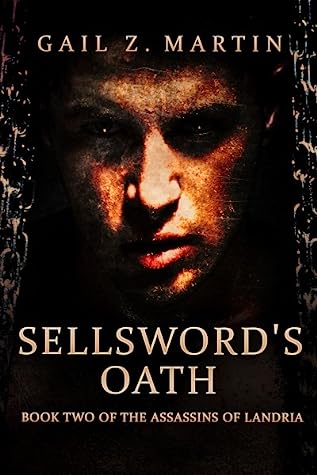 The way in which the story is built doesn't allow dead moments. Always something happens, even if is just for a detail that will become important later on. The main plot flows through several different "mini" plots until reaching the piece of resistance. Every clue, every step forward is the object of a different adventure and all of them drive us to the climax. Imagine a necklace of which each gem is a short story itself and all together prepare the eye for and highlight the centerpiece. Put together by the author's writing style the necklace becomes a superb whole.

The action scenes are in the tone with what it is expected from such a guild, even if our heroes tend to leave a louder signature (which of course, brings them other unfavorable effects to deal with). It's almost as a fantasy of medieval times with a black-ops touch.

The fantasy elements are present and well used. In a world in which the magic is forbidden, the characters, main and secondary, have and discover new powers, for better or for worse. The supreme battle between good and bad it's to be recognised as such, as it's in secret, scheming stage in the Assassin's Honor and evolves in Sellsword's Oath. There are no repeated actions or scenes. The number of allies and enemies increases and let's just say that "dead men tell no tales" is not a valid affirmation. Keeping the focus on the need to find and defeat the enemy leader, the author introduces more darker themes whilst maintaining an appearance of lightness. Each volume represents a battle and the war goes on hopefully for many volumes.

With no dull moments and idle words, the story gallops without being rushed. Somehow the well written fewer pages are not always desirable and the "classic" length of the epic fantasy genre starts to sound very appealing.  I loved both volumes and cannot wait for next! It doesn't matter if you like or not the genre, you'll enjoy this series.

Wandering mystic Yefim Makary, known to his followers as the ‘Witch Lord’, disappeared before he could be accused of inciting dissent against King Kristoph. His supporters among the disenchanted aristocrats who weren’t arrested have fled or died by their own hand. The king is happy to put the matter behind him. Yet Burke, the commander of the elite King’s Shadows, doesn’t believe the threat is over, and he assigns his two most troublesome, rule-breaking—and successful—assassins to ferret out the real threat and put a stop to Makary’s plots.

Joel “Ridge” Breckinridge and Garrett “Rett” Kennard rose through the ranks of the Landrian army together, from teenaged conscripts to seasoned fighters. Together, they became the most feared team of assassins in Landria, surviving longer that most in their profession by virtue of excellent fighting skills, legendary bravado, peerless strategy, and an uncanny synchronicity.

As the threads of a new plot come together revealing disloyalty among the priests and generals, Ridge and Rett once again find themselves on the run, hoping they and their allies can figure out the Witch Lord’s latest scheme before it costs them their lives—and the king his throne.

Find her and never miss out on the news and new releases at and get a free complete short story, Catspaw, here.
Website ** Blog ** Goodreads ** Twitter ** Facebook ** Facebook Group ** BookBub ** Instagram ** Newsletter
Author's Giveaway
the more you comment, the better your chances of winning
a Rafflecopter giveaway
Posted by CCAM at 7:00 PM

Another great book to discover. Thanks so much for sharing this with us.

How did you come up with the characters names in your book?

Are any of the characters in this movie based off of people that you know?

Great review! Thank you for hosting.