Kids, dogs, thieves, and a detective who meets a gal named Sally ... The Little Town of Summerville: A Dog Named Chubby (A Jack Wellington Mystery #1) by R. T. Douglass

Jack Wellington moves from the big city to make a new start. He jumps at the opportunity to become a detective in Summerville. 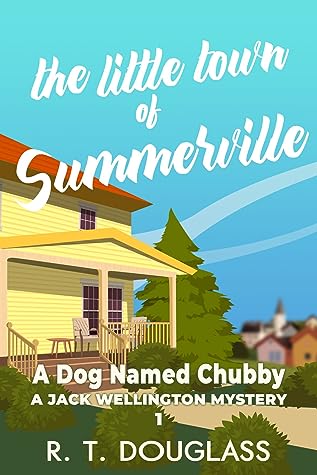 Description:
Jack Wellington moves from the big city to make a new start. He jumps at the opportunity to become a detective in Summerville.
A peculiar case is assigned to him as artwork has been stolen and a dog is missing. Fellow detective Charlie Finch, a man adorned with decades of service, uncovers clues with Jack. They become intrigued by the words and actions of a neighborhood boy and wonder how much he might know.
Clues are followed but it’s the kids in the neighborhood who provide the most relevant clues. As the detectives get closer to them with their questions, the pressure of the kids struggle unfolds.
Kids, dogs, thieves, and a detective who meets a gal named Sally in the little town of Summerville.
MB's INTERVIEW
1. Your bio says that you studied theology all your life. How did you start writing a cozy mystery?
I have studied Theology my whole life. Understanding the basic truths answers the concerns for most people. Once you show people there had to be freedom of will (the option for good or bad) then the scriptures begin to make sense. As far as the Cozy, I wanted to write and decided a mystery would be fun. I started patching ideas together and came up with: A detective moves to a new town - hoping to leave his past behind, starts new, gets an odd case assigned to him (and the reader finds out the kids in town may be a part of the problem). The detective solves work problems, personal problems, and meets a gal named Sally. It was tricky to determine how this novel should be categorized but the cozy mystery seemed to be the best fit.
2. And why do you write cozy mystery and no other genre?
‘The LIttle Town of Summerville - A Dog Named Chubby’ is my first novel. I considered writing a historical thriller (after Summerville) but I would need to change editors, so I decided to wait on that project and made Summerville into a series. I have a warm hearted short story (The Old Barn) about the different stages in life which is on my website. I am currently writing the second novel for Summerville and a short story about Christmas.
3. One of the common features of the genre is that the protagonist is an amateur sleuth. How does Jack Wellington fulfil this “requirement”? Why did you choose him to be your main character?
Yeah, there’s a lot of sleuth’s and women sleuth’s in Cozy’s. I think Jack Wellington fulfills the requirements because of the overall story. He is a detective in a police department (not normal for a cozy) but fits all the other areas - it’s light, clean, no violence, no bad language and it has a lot of the community represented in the story. Not sure why I picked Jack. I just thought it would be so much fun to have a mystery where the kids in town were involved. I could show some of the common struggles of kids and before I knew it I had Summerville with Jack Wellington and a cast of characters.
4. What are you the biggest musts for a cozy mystery story?
First, the story must contain a mystery that the reader can picture and put together. Next on the must list, the mystery should remain hidden until the end yet have plenty of clues so the reader can figure it out just before it’s revealed. Finally, there must be something on a personal level that the reader can relate to. We all have hearts, emotions, values and perspectives, so when a character wins or loses, the reader must have some connection to the challenges and the victories.
5. Do you let your readers discover the culprit themselves? What do you do to keep them interested in solving the crime puzzle?
In ‘The Little Town of Summerville’ I worked diligently to unfold the details yet keep the “who done it” secret until the end. If I wrote it successfully the reader will say, “Ah, I should have seen that.” To keep the reader interested there has to be clues and they have to be proven, meaning - you can’t just write “Joe is always honest,” but you must add to the story to prove it by ‘showing’ as Joe later in the story tells the truth or tells a lie and the reader goes “gotcha, I now know what Joe is really all about!”
6. And now a question for your muses: Duke and Kali… how did you help Robert to write The Little Town of Summerville?
Duke is older, the senior dog. He stops by and nudges Robert and lets him know he needs to take a break and get some fresh air. He reminds Robert not to get too serious but enjoy the day while writing. And, he also reminds Robert that treats are the most important thing in life. Kali is a different story. My daughter found the litter in a barn a few houses down when the pups were just a few weeks old. She said they would be ready for adoption at week nine, how could Robert say no? Kali is HUGE, all play, gentle and very obedient. When I step outside with Kali she gets so excited she runs around the house many times. So much that there’s a path around the house, yeah really. She’s very simple with the same message, ‘It’s a great day. Let’s go!’
TOUR SCHEDULE
Goodreads ** Amazon
About the author:
Robert has an AAS in Microsoft Networking Technology from Glendale Community College and is a Microsoft Certified Professional.
He likes reading, writing, and exploring natural wonders. His favorite pastime is telling tall stories around the campfire.
Website ** Facebook ** Twitter

Great interview! It's always great getting a behind the scenes look into the author's life and thoughts. Especially loved the last question! ;-)

During my research for the interview, I found this "Duke and Cali keep the atmosphere light as stories form in the office." So, I had to ask something about them and their contribution :)

https://rtdouglass.com/about-us/ (go down on the page)