a genetic gift for undoing time... Undoing Time (The Timegathering #3) by Rachel Dacus

A thrilling tale of time travel, romance, and espionage. 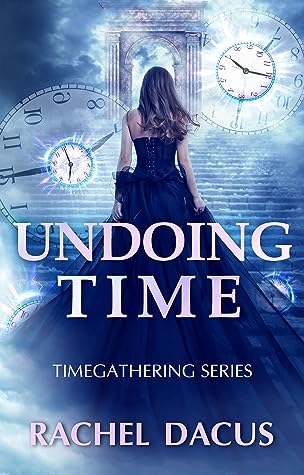 Liv Pomeroy’s high hopes and lavish lifestyle come horribly undone when her fiancé runs off with her maid of honor.

Swearing off love forever, she goes on a summer escape to Florence, Italy. Agreeing to help her cousin May raise funds for an art restoration project, Liv is astonished to find they share a genetic gift for undoing time. Soon she’s joining a team of time travelers who rescue history from those who would change it. And fighting her attraction to a sexy time traveling colleague, who just might turn out to be working for the wrong side in the American Revolution.

A thrilling tale of time travel, romance, and espionage.

EXCERPT
The announcement of another flight jolted her back into the present. It wasn’t her flight. She relaxed again into her seat and put her feet up on her carry-on.
In her pocket, her phone buzzed and Liv pulled it out. Seeing the name, she hesitated, but with a sigh swiped it open. The familiar voice that was synonymous with nagging trilled in her ear.
Her mom’s insistent soprano told her, “You don’t have to do this, Olivia.“

“But I do, Mother. You know Dad agrees with my going to Italy. He even set it up.”
“Flying off to another country isn’t going to bring Joel back to you.“
She tried not to shout at her phone. “Why would I want that asshole back!”
“Language, Olivia.”
But Liv was beyond parsing words. “If Joel comes back, they’ll arrest me for murder. Because I’ll kill him.”
“It’s a good thing you work in an art museum, around all those temperamental artists, where no one will notice your emotionalism.”
“I’m emotional because my almost-husband treated me like a piece of furniture. And my best friend helped him.”
“Olivia, you’re being impulsive.”
Liv realized she was again in danger of murder. Double or triple murder. First Joel, then her mother. Maybe Rita too. Good thing they were on the phone.
“Mom, I need to do something that matters.”
“Your life matters to us.”
It was Liv’s turn to pause. Because it echoed what Joel had said after she threw the ring. “You’ll never have the guts to make your life matter, Liv.”
She was done. “OK, Mom. They’re boarding. Gotta go.“ They weren’t, but this conversation had to end.

“Just remember Liv. Family is everything.”
Liv pretended to have already hung up before hearing that. She sank back into her chair and closed her eyes, letting the airport noise wash over her.
A few minutes later, an amplified voice rose over the hubbub. ”Flight 564 for Florence, Italy, boarding in fifteen minutes through Gate 17.”
Liv had just enough time to pop into the future and see this flight land safely. Florence Airport, 2:30 pm, she whispered. A familiar feeling tingled in her cells as time’s curtains parted. Heat rose from the concrete as Liv stood on the runway watching the plane—the plane she would soon board—as it bounced down and skidded to a stop, then taxied to its gate in the Florence airport.
Reassured, she jumped back, ready to board. Liv called her little trick undoing time.
Goodreads ** Amazon 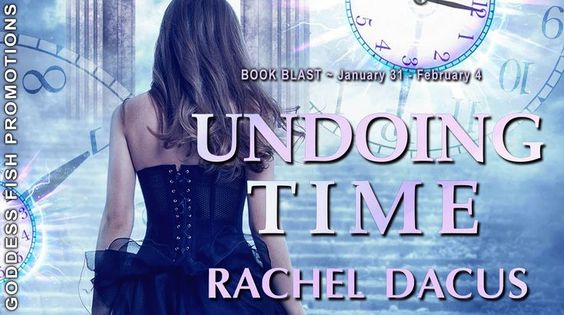 About the authors:
RACHEL DACUS writes about history, love, romance, and art – usually with a touch of the supernatural. If time travel were possible, she’d hop over to Renaissance Rome, and then check out how the American Revolutionary War is going, and maybe visit an 18th century London artist’s studio. A poet and novelist, Dacus has published four novels and four poetry collections. When not writing, she listens to music, new and old, from indie and progressive rock to classical and jazz. Once a dancer, she’s now an avid walker, often twice a day -- once for the Muse and once for the world’s liveliest Silky Terrier. She blogs about the writing life and has collected a wealth of writing and publishing resources.
Website ** Goodreads ** Twitter ** Facebook ** Instagram
Author's Giveaway
the more you comment, the better your chances of winning
a Rafflecopter giveaway
Posted by CCAM at 9:00 AM

Thanks for hosting my book and giveaway!

I love the cover and the book sounds good.