Find out about the latest twist!Cape May Cozy Mysteries with a Twist by Jane Gorman

"This was such a great cozy mystery. I love the characters and how the author provided enough insight to let you feel connected, but keep you coming back to find out more! This book has a great pace and I could not put it down! There was a great who-dunit that left you wondering how it would turn out until the very end." Nikki, Goodreads 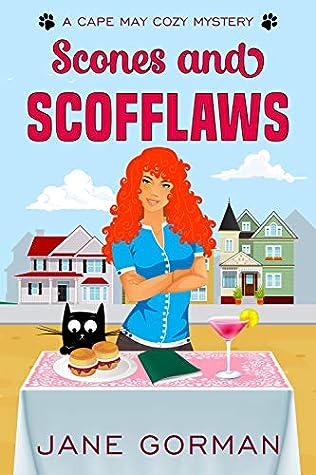 Description:
Scones and Scofflaws (#1)
Published: December 20th, 2020
Setting - Cape May, New Jersey
When a gorgeous man dressed as Bridgette Bardot buys her a Scofflaw and asks her out on a date, Anna McGregor begins to suspect her murder investigation has taken a wrong turn. Her previous work as a medical anthropologist exposed her to a variety of unexpected situations, but none quite like this.
“The story does a great job of setting up the mystery and then anthropologist turned B&B hostess, Anna McGregor leads us through a merry chase and I thought I had it partially figured out but then realized...red herring. I would suggest you skip to the back of the book to find the scofflaw recipe and make one to enjoy while you armchair sleuth your way through this charming and cozy mystery.” — Tracy’s Tidbits
It all seemed so simple: fix up the Cape May Victorian mansion she’d inherited from Great Aunt Louise and re-open it as the exceptional B&B it used to be. Everything’s going great, until her very first guest turns up dead at the breakfast table, crumbs from Anna’s blueberry scones scattered on the lace tablecloth.
As the town’s gossip mill goes into overdrive, Anna leaps into the fray to save her reputation, her business and Great Aunt Louise’s legacy.
With help from a handsome handyman eager to solve all of Anna’s problems and a young police officer new to murder investigations, Anna does her best to convince the town — and her future guests — that while her scones may be killer, someone else was responsible for this murder.
Goodreads * Amazon * B&N * Alibris * IndieBound * Kobo * Books2Read 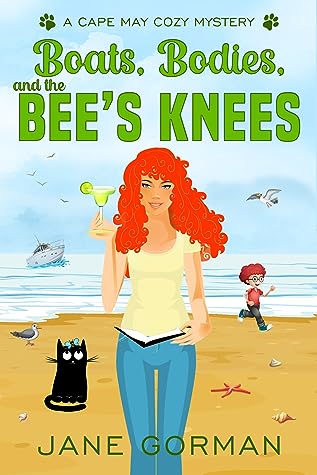 Boats, Bodies and the Bee's Knees (#2)
Published: April 9th, 2021
When her friend’s uncle is accused of murder, Anna McGregor dives into the boating life to prove his innocence. She soon learns that while lounging on a luxury yacht might be fun, matching wits with a killer can be deadly.
Life has finally settled down for Anna. The Cape May B & B she inherited from her Great Aunt Louise is fully booked and Anna is looking forward to a successful summer. Her peace is shattered when a body washes up in Spicer Creek and the police focus their investigation on her friend’s uncle. Determined to find the truth, Anna turns to skills she developed in her previous career in medical anthropology.
Once again, Anna teams up with her best friend Sammy, her young cousin Eoin and the local librarian to use their knowledge of the town and its people to solve this crime. But the disappearance of two local teenagers reminds Anna this is the wrong time for free fishing trips or relaxing on a yacht enjoying a Bee’s Knees cocktail. She needs to find the missing teenagers and identify the killer before anyone else gets hurt.
Goodreads * Amazon * B&N * Alibris * IndieBound * Kobo * Books2Read - 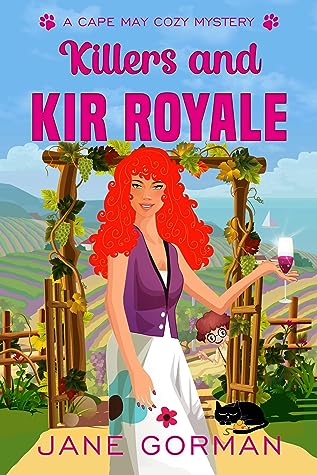 Killers and Kir Royale (#3)
Published: December 17th, 2021
When a love of wine becomes lethal, local B&B owner Anna McGregor discovers she’s the town’s connoisseur at defending the innocent and unmasking murderers. But if she goes after the killer, will the people she cares about most get crushed in the process?
Anna loves the new life she’s built for herself in Cape May, a town known for its historic beauty, picturesque beaches, developing wine culture and … murder? Thanks to some previous successes – and a close relationship with a local patrolman – Anna finds herself pressured into accepting the task of proving a new friend’s innocence in a tragic death at a local winery.
Her investigation reveals an embarrassment of suspects, not to mention one too many potential victims. As always, Anna relies on help from her friends to find the truth. This time, though, offering help means breaking the rules.
Now she must not only catch a killer but also save the reputation of one of her closest friends, all while getting ready to send her young cousin, Eoin, back to Ireland, trying to solve the riddle of her love life, and figuring out her future as a medical anthropologist.
Goodreads * Amazon * B&N * Alibris * Kobo * Books2Read -

About the author:
Formerly an anthropologist, then a diplomat, then a park ranger, Jane Gorman now writes murder mysteries. Building on her knowledge of Philadelphia (her home for many years) and her varied experiences, her Adam Kaminski mystery series features a Philly cop who manages to solve complicated murders in far-flung locales, both in the U.S. and overseas. Her Cape May cozy mysteries paint a light-hearted, fun picture of the Cape May life of a former anthropologist who just happens to be good at solving murders - and trying out new cocktails!
Website **GoodReads ** Facebook ** Twitter **  BookBub
Posted by CCAM at 10:30 AM

Thanks so much for sharing this!