"Reminiscent of Sex and the City and the Shopaholic series in the best possible way. Her stories are a lot of fun and yet she still tugs at your heartstrings."--Gail Chasan, Special Edition Editor 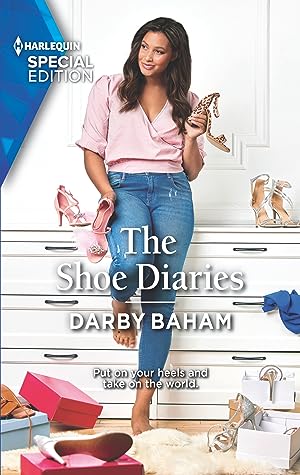 Description:
Release Date: January 25th, 2022
It’s never too late to put your best foot forward
From the outside, Reagan “Rae” Doucet has it all: a coveted career in Washington, DC, a tight circle of friends and a shoe closet to die for. When one of her crew falls ill, however, Rae is done playing it safe. The talented but unfulfilled writer makes a “risk list” to revamp her life. But forgiving her ex, Jake Saunders, might be one risk too many…
From Harlequin Special Edition: Believe in love. Overcome obstacles. Find happiness.
Darby Baham’s Washington Post bylinesI had the perfect date dress. Why did it hang in my closet unworn for more than a year? -- March 201When it comes to relationship advice, sometimes it’s best to ignore your friends -- February 2016I’m the oldest sister in my family and I’m single. And that’s okay. -- March 2016I was afraid to say ‘I love you.’ Here’s how I found the courage. -
GUEST POST
RUNNING INTO AN EX
Every woman I know watching the Ja Rule & Fat Joe Verzuz saw Nelly walk up to Ashanti, arms wide open, and cringed just a little at the memory of having an ex-boyfriend approach you at the exact wrong time. But at least she looked amazing when it happened; that was definitely the saving grace.
I lived in the same city for 15 years, so I think it's safe to say that I've had my fair share of running into exes. Some have been the way you always hope for it to happen--I looked amazing, lipstick was popping, clothes were fitting just right, another dude was on my arm. And some, well... let's just say I think it should be a crime to run into an ex after you've just died in a spin class.
Regardless of the circumstances, though, it's always the same initial thought for me. "Is that who I think it is? Crap, it is. Can I get away without him seeing me? Nope? Sigh, nope. Well, here we go... heyyyyyy."
Probably one of the funnier instances I experienced in DC was when I spotted a guy who I'd dated for a couple months, but things had sort of naturally fizzled out. And there he was, at a football tailgate with his kid. I was so scared that he would assume I’d planned this impromptu sighting that I literally ducked down and tried to hide from him while running away for at least 2 minutes. I'm fairly sure he didn't see me (let's hope, it was pretty embarrassing! Not a good look for your girl.) but many, many people at the tailgate did.
And still, overall, I'd consider it a success. Because despite all the antics, I didn't have to subject myself to what would only have been Issa Rae-level, awkward conversation with him.
Reagan Doucet, the main character in The Shoe Diaries, also has one of those cringe-worthy ex encounters. Like me, she sees her ex and tries to quickly assess if she can run away from the situation. Unfortunately, he notices her, and everything that many of us are scared will happen, does. He is incredibly condescending, tries to get her to forgive him without any genuine work for it, and generally leaves an awful taste in her mouth.
Thankfully, she has her friends to laugh with her after the experience and remind her that she's a badass despite how she feels. Not everyone is as lucky. So, if you, like Reagan (or me!), ever need a reminder that your ex should be the one hiding from you when he sees you… take this as your prompt. And maybe you can be like Ashanti; fabulous and unbothered while he drools.
Goodreads ** Amazon ** Barnes&Noble ** BooksAMillion ** IndieBound ** Harlequin ** GooglePlay ** Target
NOTE: Here is the link to subscribe to receive books specifically from Harlequin Special Edition --
Darby's book will be included in the January edition. 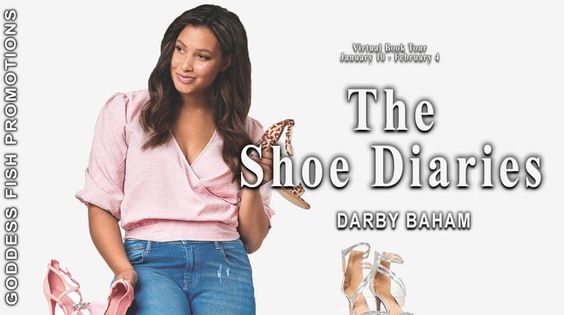 About the author:
Darby Baham (she/her) is a debut author with Harlequin Special Edition and a New Yorker of five years who sometimes desperately misses the sprawling shoe closet she had while living in Maryland. She’s had personal blog posts appear in The Washington Post’s relationship vertical and has worked in the communications industry for more than two decades. The New Orleans, LA native is also a lover of big laughs and books that swallow you into their world. Her first book, The Shoe Diaries, debuts in 2022.
Website * Goodreads * Facebook * Linktree ** Twitter * Instagram
Author's Giveaway
the more you comment, the better your chances of winning
a Rafflecopter giveaway
Posted by CCAM at 10:30 AM

Thanks for sharing my guest blog post! I hope readers enjoy :)

Thanks @marisela zuniga!! I hope you get the book and enjoy it :)

Thanks katieoscarlet! I'm glad to hear you liked the guest post.

This book looks so cool

Thanks, Dale Wilken! Really appreciate it.

Love this guest post! Definitely makes me want to read the book. Added to my TBR and wish list!

This sounds like a good read. Is this strictly a stand alone story or is there a potential sequel in the works?

Love the cover - makes me smile

Thanks Mick Loves Books!! I'm honored to be added to your TBR list!

@ Bea LaRoccao, great question! The Shoe Diaries is the first book of a series; the second book comes out at the end of May 2022!

I believe in love. Good work.

Thanks @abfantom!! And the cover is the shoe closet I wish I had haha.

The guest post has me wanting to read the book! Thanks for the giveaway!

I really appreciate that @Debbi Wellenstein !

I like everything about this book - genre title & cover!
Thank you for sharing it with us.

I hope your day is going amazing

Thanks @ Barbara Montag ! I was over the moon when I saw the cover; I just thought it perfectly represented the title and the tone of the book.

Hope your day is going well too, @zelda!

@Barbara Montag, that's a great question! Sadly, the answer is no, I haven't. My resolution this year is to get better at celebrating and enjoying the present... I think you can see why! I did buy myself a pair of SJP heels when I signed my deal with Harlequin, and I shared a bottle of champagne with a cute guy when I got my first box of The Shoe Diaries. So, progress. But now that you've asked me, I'm going to make sure I do something to treat myself when I finish Book 3. Thanks!

@laurie nykaza , thanks a bunch! I hope you enjoy it!

@Barbara Montag , my best advice for writers is don't stop writing. Even when it gets hard or you don't feel like you're making good progress, your job is to keep doing it. And the more you write, the better writer you'll become.

I enjoyed Running into an Ex and The Shoe Diaries sounds like a delightful read for me! Thanks for sharing it with me and have an awesome weekend!

@Barbara Montag, thanks for adding it to your TBR list! I think probably I had the most fun writing the scenes with the friend group-those characters make me laugh like my real friends do! Also, of course deciding what shoes she was wearing for each moment, and then the last chapter. It's my favorite!

Thanks @zelda! Very much appreciated :)

@Stormy Vixen, I'm so glad you enjoyed. Hope you had a great weekend as well.

Thanks @zelda, I hope you had a great one too!

@Barbara Montag , mmm this is a hard one because truthfully, I don't love crying. Like at all. But the one that comes to my mind right now is Nikki Giovanni's Love Poems. The way she writes about love just breaks me down.

@Barbara Montag, this is my debut book, but I've already written the 2nd one and have started writing book 3. It's hard to pick a favorite, because I love them all for different reasons.

Re: marketing, I'm still learning some of this, but I think the most important part is to be yourself and to be engaging, especially on social media. It goes a long way!

Have a good week.

I don't write creatively every day @Barbara Montag because I write/edit daily for my "9 to 5" too. However, when I am in the zone, I try to write between 5 to 12 hours a week.

Thanks @Debbi Wellenstein! I hope you have a great week too.

@Barbara Montag, my character names come from lots of places--people I know, names I've just heard and liked over the years, and Google searches :)

As for what I'd do if I couldn't write, that's a hard one since I'm also a writer/editor in my day job too. But maybe I'd be a therapist. I'd certainly want to be doing something that helps people.

Hi @Barbara Montag! I don't have an average time just yet lol. It took me over a decade to write the first one and 3.5 months to write the 2nd one. We'll see about the 3rd, which I'm on right now.

I hope that you do have a hard time putting it down, to be honest haha. That's the goal!

I've only written 2 so far, and I can't possibly pick a fave. They are both my babies :)

Did you ever consider writing under a pseudonym?

Oh my gosh! Darby, I LOVED this guest post. So relatable.

@Barbara Montag, not at all. I enjoy seeing my actual name on things I write :)

@Barbara Montag, writing usually energizes me and helps me process things in my life. Of course there are times when it's tiring if I like I'm stuck on something.

@sheila ressel, thanks a lot!!

@Denise, it really is! And thanks!!