"This storey has the intruige and mystery of the master storey but then the sub plot of this couple - querky, fun, and really entertaining.
Loving this series so hard!" Andrea, Goodreads 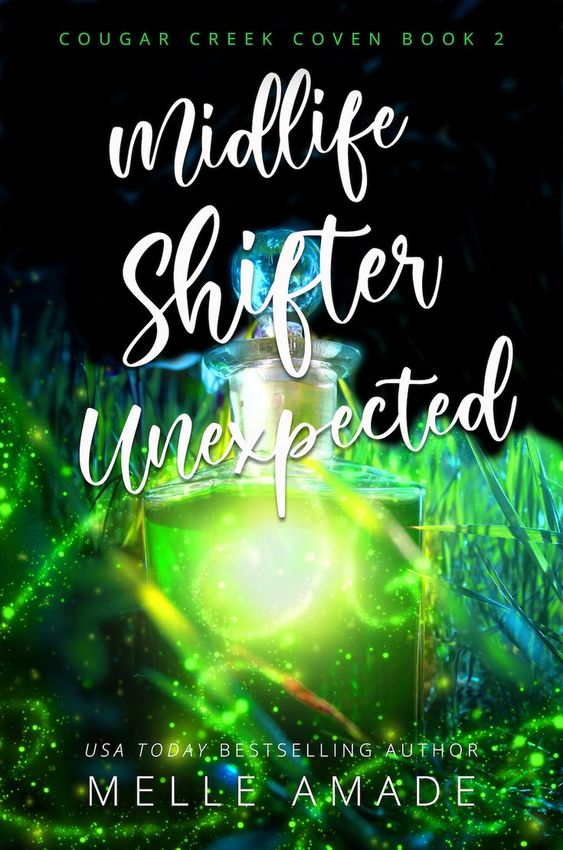 Description:
Published: January 18th, 2022
My new BFF is a witch and apparently, I’m a member of a witch’s coven. Only, I’m not a witch. Word is, I’m a wolf shifter. When I said I wanted to start over again, this wasn’t exactly what I had in mind.
Being a shifter isn’t the worst thing I could imagine. It’s taken care of all the hot flashes. My body temperature now runs constantly high. I like it. Snow? Who cares? I don’t need no stinking coat anymore.
I can smell like ten times better than even when I was pregnant, and as for my vision? Glasses are SO last year. I won’t be needing those anytime soon.
But man, what about the actual shifting? That hurts like nobody’s business. They say I’ll get used to it, but they don’t know how much it hurts, because I’m the only shifter for miles around. “They” are the coven that has accepted me and given me a new family.
The threat from the cemetery is very real and the dead aren’t sleeping quietly. Our coven is the frontline on keeping the dead in their graves and for some reason, they think because I’m a wolf I should have some superpower against the dead. But I don’t.
What I have is an amazing BFF just as powerful and middle-aged as me and I know together we can face anything. At least I think we can. We survived the first half of our lives.
How hard can the second magic half be?
A hot new series celebrating midlife, friendship, and older women who crave adventure by Melle Amade. Perfect for fans of K.F. Breene, Shannon Mayer, Jana DeLeon, Darynda Jones, Robin Peterman, Elizabeth Hunter and Denise Grover Swank.
EXCERPT
“I have to go pee,” I said as we were about to walk out of the parking lot. We had both left our vehicles back at my place.

“I had a cup of tea and a glass of water. I don’t see why I should be this messy.” I could feel myself weave as I turned and aimed back towards the Waldorf. I really needed to pee.

Mae tilted her head to the side. “Don’t get distracted.”

I ambled back through the stained-glass doors of the Waldorf, fully intending to just go to the bathroom, but I knew this phone number thing wasn’t going to work for me. I looked around the bar, but Matheus wasn’t behind the counter; he was out bussing tables.

I walked over to the bar, grabbed a pen, pulled out the receipt, and scribbled on it. I took a deep breath. There was only one way I was going to be able to deal with this. It would drive me crazy if I just went straight home. I would just sit thinking about it.

This was a much better idea.

I walked up behind Matheus where he was clearing an empty table. I tapped him on the shoulder and when he turned around. I stood up on my tiptoes and reached up, putting my arms around his neck and gave him a solid kiss on the lips.

It was like melting into warm butter. I wanted to do so much more with him, but no, I just needed to make sure that we were on the same page. That we liked each other.

His eyes opened wide and he grinned down at me. “That was surprising,” he said. “But I liked it.”

He glanced around the bar quickly before reaching for me again. I put my hand against his chest, holding the receipt in my hand.

“There is my phone number,” I said.

I turned and walked back out of the bar, completely forgetting that a moment ago I had to pee. Now I just wanted to put as much distance between me and Matheus as possible before I fell through the floor in embarrassment.

I burst out of the front door of the Waldorf; hands raised in the air. “Oh my gosh.”

Mae raised an eyebrow, looking at me. “You were pretty quick.”

“I had to.” I gushed the words out still feeling the rush of adrenaline. “I didn’t want to spend the next few weeks wondering if I should call him or if he was going to try. Now it’s clear. I like him, and he likes me. If he doesn’t like me then he shouldn’t call, but he does like me.”

“You’re gonna be completely neurotic about this, aren’t you?” Mae asked. “Now you’ve given him your number, you’re going to sit by your phone and wait for him to call.”

“Oh my Gosh, I am the oldest teenage girl I’ve ever met in my entire life,” I moaned.

“Okay,” I agreed. Mere minutes later, it seemed, I was home. Mae didn’t come in and I didn’t invite her. I wasn’t sure what was affecting my energy, but I needed to be alone and maybe have a hot bath. That sounded like the perfect idea.

I drew the bath and filled it with some lavender infused bath salts and a lemon grass essential oil. I fetched myself a glass of wine from the kitchen and by the time the bath had filled, my stomach had settled down . Mae and I had had an interesting night. I might have been a little crazy, but what was the harm in that at our age?

Mae hadn’t seemed shocked by my behavior, so maybe we were going to become friends after all.

I suddenly buckled forward. A hot flash started from the core of my chest and undulated through my entire frame. At first it felt like a harmless flush of warmth, but suddenly I was embroiled in the heat as it was ripped through me.

I gripped the side of the counter as waves of heat and sweat poured over me.

I squinted my eyes closed. Every bone in my body was aching as if they were going to tear and break apart. My eyes flung open wide as I felt something sprout from my hands. I gripped the counter and screamed.

There was hair growing out of the back of my hands!

What in Heaven’s name was happening to me?

About the author:
USA Today Bestselling Author. Farm Girl. Marketing Director.
Since I was eight, I have been writing stories that capture the adventures in my head and the characters strong enough and flawed enough to have them. When I look at an empty field, I see a formidable citadel. When I meet a vulnerable old man, I greet an emeritus warrior. When I walk through city streets, I feel dimensions hiding around every turn. It has been my lifelong passion to explore these worlds that reveal the pain of loneliness, the joy or self-actualization, and the hope of magic.
I grew up in a place called Potter Valley where the Milky Way is held aloft by a circle of mountains and the central business district consists of a bait store and a saloon. At 19 I moved alone to London and spent the next ten years exploring the world, even becoming an Australian citizen, before I returned to California and found a new home in Los Angeles. My world revolves around my two wee children, storytelling, and my love of travel.
Website * Goodreads * Facebook * Instagram * Bookbub
Author's Giveaway
a Rafflecopter giveaway
Posted by CCAM at 3:50 PM