is this a mission impossible? Rogue (Black Dagger MC #1) by M.D. Stewart

" This is a well written engaging, suspense filled, action packed, steamy MC romance. Rogue and Stevie just complete each other, and draw you into their story. This is a new to me author and I cant wait for more!" Jenni, Goodreads 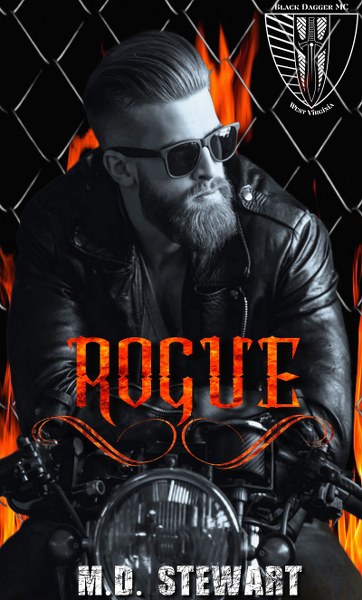 Description:
Published: January 21st, 2022
With a corrupt cop and an escaped killer hunting them, can Rogue do the impossible and save Stevie?
Stevie Anderson barely eluded death when deranged serial killer, Paul Turner, murdered her entire family before setting their house on fire. While in protective custody, she’s hidden where the killer would least suspect — the home of a biker in the Black Dagger Motorcycle Club.
Mac “Rogue” Steele resisted his twin’s suggestion to hide a federal protection witness in his home; until he gets to know the shy but charming woman. With a bruised heart, scarred body, and beautiful soul, it doesn’t take long for Stevie to claim his cynical heart.
After her family’s killer contacts Stevie from his prison cell, Rogue takes her on the run through the hills and hollows of southern West Virginia.
Relying on the help of his MC, Rogue desperately searches for a way to keep Stevie alive.
EXCERPT

Rogue handed her the bags that weighed the least before loading up his arms with the rest. “Leave the laundry detergent in the truck, that stays here.” He used his head to point to the washer and dryer in the corner of the garage.

Stevie opened the door to the house and let him pass by since he had the heavier load. “Doesn’t the water line freeze out there?”

Misty was standing in the kitchen and took the bags from Stevie’s hand and put them on the counter. “Mr. Outlaw Biker keeps his garage heated for his precious bike. I swear he’d give it a bubble bath if he could figure out how to get it in the tub.”

The loud sound of a game show came from the living room. Misty took Stevie’s hand. “I’m so sorry to just drop in like this. Archie can be very insistent sometimes. If I don’t drive him where he wants to go, I’m afraid he’ll steal the keys and try to drive himself. Nobody wants that.”

Stevie looked to Rogue and then back to the diminutive woman clinging to her hand. “Uh, that’s fine. I’m just staying with Rogue for a short time. He’s doing me a favor and letting me crash in his spare room.”

Misty winked then patted her hand. “I know how those Steele twins are. Casanovas the both of them.” She laughed and shook her head. “There ain’t no shame in getting caught up in those pretty eyes of theirs. Lots of us women fall for those chocolate brown beauties.”

Jealousy shot through Stevie at the thought of the petite woman sleeping with Rogue. It shouldn’t bother her, it’s not like she was in a relationship with the man. Even if she wanted one.

“Misty.” Rogue’s voice held a warning. “Did Dad have a reason for wanting to stop by?” He stood behind Stevie  and wrapped his arms around her waist. Pulling her  into his embrace, he tucked his chin on her shoulder. The move was clearly claiming her in front of the other woman.

Misty shook her head and grinned. “You know how he gets sometimes. Archie came thundering into the den and threw down his jacket and said he was going to ‘Mac’s house to watch college football.’” Misty was putting away groceries as she spoke.

Stevie felt like she should be doing something to help. She started to move away from Rogue, but he tightened his grip. She smiled and turned to kiss his cheek when her burner cell rang. That was odd.

He looked at his father’s assistant. “College football season is over. He probably forgot about it before he got here. He seems happy to be watching game shows.”

After pulling the cell from her pocket she looked at the number. Only two people would have this number: Rogue and Detective Martin. Usually, he just texted code for times of meetings. The screen read “Anonymous” and that gave her pause. Hitting the button, she brought the phone to her ear but didn’t speak.

“Thanks for answering bitch. Now I can track you down and finish you off.”

Her body began to shake, and her vision became fuzzy around the edges.

“You’ll never be out of my reach.”

The line went dead. The phone slipped from her numb fingers to clatter to the floor.

About the author:
I was born and raised in southern West Virginia. At eighteen, I married a man I met in college and even though we went our separate ways, he gave me two wonderful children. I've always loved reading and I'd write poems and short stories for as long as I could hold a crayon, pen or pencil. Once I realized I could self-publish I got excited and started writing down the stories of my characters that live in my head. When I'm not writing my husband and I can the vegetables we grow in our garden, take care of our pet chickens or play with our two cats.
Website * Goodreads * Facebook * Twitter * Instagram * TikTok * Bookbub * Amazon
Author's Giveaway
a Rafflecopter giveaway
Posted by CCAM at 8:30 PM

Thank you so much for sharing my book on your blog! I really appreciate your time and your help in getting Rogue out there.

I'm liking the sound of this one. Great cover too.

Thank you, Laura! Wynter Adams created my cover, and she is incredibly talented. Rogue was fun for me to write. Dodge was fun too. Buc, he's being stubborn lol.