When revenge is all that’s left… Nothing Left To Lose by A.J. Wills

"I can’t finish my review without commenting on the fantastic, action-packed ending. Shocking, gripping and nail-biting is how I would describe it! Having read some of Adrian’s other books, I feel like an explosive showdown at the end is definitely his thing. He certainly knows how to finish a book in style!!" Cathryn, Goodreads 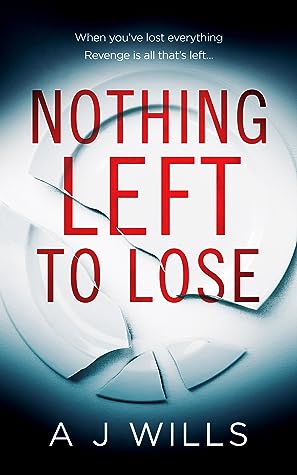 Description:
Published: January 10th, 2022
When you’ve lost everything – revenge is all that’s left…
After securing the convictions of two violent murderers for a horrific and brutal attack on a pensioner in his own home, Henry’s wife, Abi should be celebrating.
With the nation watching, it was her biggest test as a criminal lawyer.
But someone’s not happy.
First, there’s the hooded stranger who follows her home in the dead of night.
Then comes the attack on her car and a death threat in an anonymous hand-delivered letter.
Someone’s trying to scare them.
Someone wants revenge.
And they’ll stop at nothing until they’ve brought the couple to their knees – and exacted a deadly retribution…
Nothing Left To Lose is an electrifying psychological thriller from the No. 1 bestselling author of his Wife’s Sister.
EXCERPT

Where the hell is she?

It’s gone half nine and a niggle of worry rumbles in my gut. A vision of Abi on a hospital trolley flashes through my mind. I shove it away. I’m being silly. Worrying unnecessarily. I’m sure she’s fine.

I snatch up my phone and hit the redial button, willing her to answer, hoping for a slurred apology and the sound of music thumping in the background. At least I would know she was safe.

I listen to a long hiss-filled silence, the blood gushing through my ears.

And for a split second, I dare to believe I’m through.

I slump in my chair and pinch the bridge of my nose as I ring off, my heart beating a little faster and a little harder. A kaleidoscope of images of my wife’s body dumped by the side of the road, bleeding, lifeless, her eyes staring blankly, spiral through my head.

I refuse to be that husband. She’s perfectly capable of looking after herself. She’s not a child. And yet, I can’t help but worry.

Of course, the lasagne’s ruined. A fiery blast stings my face as I flip open the oven door. I step back to let the curls of steam rush towards the ceiling and peer inside despondently at the charred remains. Shavings of Parmesan cheese are blackened beyond salvation and crusty tracks of meat sauce have bubbled up and hardened over the sides of the ceramic dish. It’s as good as cremated, even though I turned the heat down hours ago.

I slam the door shut. Wasting good food irks me, especially when I’ve put effort into cooking. It’s not as if it’s one of those vile cardboard-tasting ready meals, straight out of a packet. It’s an authentic Italian recipe from a dusty old cookbook I picked up in a secondhand bookstore in town. I used a pinch of rosemary and cubes of pan-fried pancetta for the ragu and a sprinkling of nutmeg in the bechamel sauce. A surprise treat to celebrate the end of Abi’s trial.

I’ve lost count of the number of evenings and weekends she’s given up working on the case. The missed bedtime stories with the girls. The hours going through witness statements “one more time”. After everything she’s sacrificed over the last couple of months, I thought tonight we could spend some time together.

But she’s not come home and her phone’s off.

About the author:
AJ Wills is the number one Kindle bestselling author of multiple psychological thrillers.
He was a journalist for 20 years and also ran the communications department at a national charity in the UK.
He has been writing full time since March 2021 and runs the small independent publishing company, Cherry Tree Publishing, with his wife, AJ McDine, a fellow thriller author.
“I've always loved thrillers, but psychological thrillers hold a special interest for me because they're about the scary, insane, disturbing things that happen to ordinary people - and we can all relate to them on some level,” he said.
He lives in Kent in the UK with wife, Amanda, their two teenage sons and two cats.
You can find out more about him by visiting his website. Or contact him directly at adrian@ajwillsauthor.com
Website **  Goodreads ** Facebook ** Instagram
Author's Giveaway:
a Rafflecopter giveaway
Posted by CCAM at 12:30 PM

Great cover, congrats on the release.