REVIEW - Beyond Atlantis: An Epic of The Ancient Americas by Lucius Beauchamp

“There was romance in every word, every nuance.”
‘When can I read such books?’ 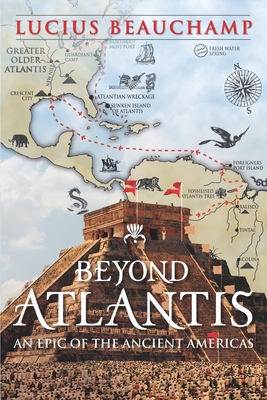 “There was romance in every word, every nuance.”
‘When can I read such books?’

Read this book and you’ll go “on an unexpected adventure”!

Why unexpected? Because the blurb does not reveal a thing about what author Lucius Beauchamp prepared for its readers in “Beyond Atlantis”.

The background is indeed the world of the Atlantis descendants, and their blood is the measure of the mundane and magical power, political power. The story and the main heroes’ destiny are influenced by politics, the (religious) court intrigues. Even my favoured characters try to obtain things that are not compatible and this way, sometimes, their partner would sacrifice what they value most. You’ll see.

The worlds drawn on the map at the beginning of the book come to life through the author’s descriptions. The combination of the real historical elements and myths creates a believable world, a civilisation with a past, present, and future. Only one aspect had me a bit disappointed (and this term could be too harsh): the world, full of magic and, safe to say, original should not have left room for a few terms as honeymoon or Fengshui. Anyway, detailed political and social elements, mores and traditions are presented without spoiling the rhythm or boring the reader. They become necessary and help you to understand and be lenient with the main characters when, in your eyes, they make mistakes. The language is colourful, elegant, fluid and adds value to the story.

Of course, the stakes are high, the battle between good and evil, the conflict between light and dark are present and put to the test the characters. Still, the author has a different approach as I believe that the main stake is not (only) the fate of the world itself, but the fate of the soul mate bond. This special bond at which many of us dream is the source and the fuel of all it happens. Is there still a place for it? May the characters ignore it? What is its relevance at the world-historical scale?

I liked a lot both, Zithia and Galen. “There was romance in every word, every nuance.” They change together, as they have to deal with the eternal antagonism between fate and free will. What should they choose, what should they sacrifice? Their social positions, their morals, the possibility of happy lives, their love, or even more? There is a duality in their choices that increases the reader’s interest in what is to happen next. The dangers, the battles, and the adventure the main characters have, their love and even their sacrifice will be for many readers a good journey. Do not despair when you’ll see the page number, you will not feel them.

‘I live in interesting times,’ the high priest reflected, ‘Perhaps I can be archpriest and keep my soul mate.’ 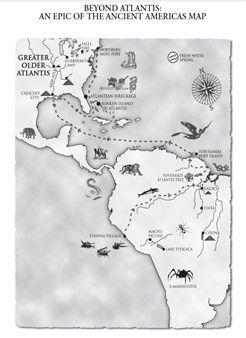 Description:
Cover Artist: Flametree Creative
Tagline: Greater Atlantis, where The Guardian Tribe roam
10,000 years ago, ancient Atlantian Tribes of magicians flourished in the lower Americas and along the Mississippi.
Galen, an Atlantian magician priest is locked in a relentless power struggle with an envious sorceress who blackmails, lies, and manipulates. A prince of the blood, Galen is determined that nothing will stop his becoming an Archpriest.
Eten, blackest witch and high priestess sees angels and seeks a forbidden treasure. She finds Galen’s curse of having a soulmate particularly helpful.
Half a millennia ago the Island of Atlantis sank off the Biminis, the 13th Tribe was held responsible for the demise of Atlantis. The surviving Atlantians stripped the 13th of all technology and exiled them.
Vengeful, the 13th Tribe wishes to return but the 13th’s warlocks fear crossing into Greater Older Atlantis. They do not dare set foot on the Guardian-protected land. The great Guardian Tribe possess a formidable circle of psychics who roam North America keeping constant vigil to keep Greater Older Atlantis safe for all Atlantians.
Goodreads ** Amazon

About the author:
Like Plato, Lucius believed Atlantis existed. Interpreting Plato's description of location, backed up by Edgar Cayce's readings, the Island of Atlantis was off the Biminis. Therefore, for him, the Continent of Atlantis (Greater Older Atlantis) was North America.
Goodreads ** Amazon
Posted by CCAM at 4:02 PM

@Eman Yassien - thank you for reading the post/review. Yes, I liked it and rated it with 4 Goodreads stars "really liked it"