A Wallflower’s Guide to Becoming a Bride by Eva Devon, Stacy Reid, and Tamara Gill

Three sensual, witty, and sigh-worthy happy-ever-afters featuring Wallflowers following a guide to seducing the heart of rakes and rogues of the ton... 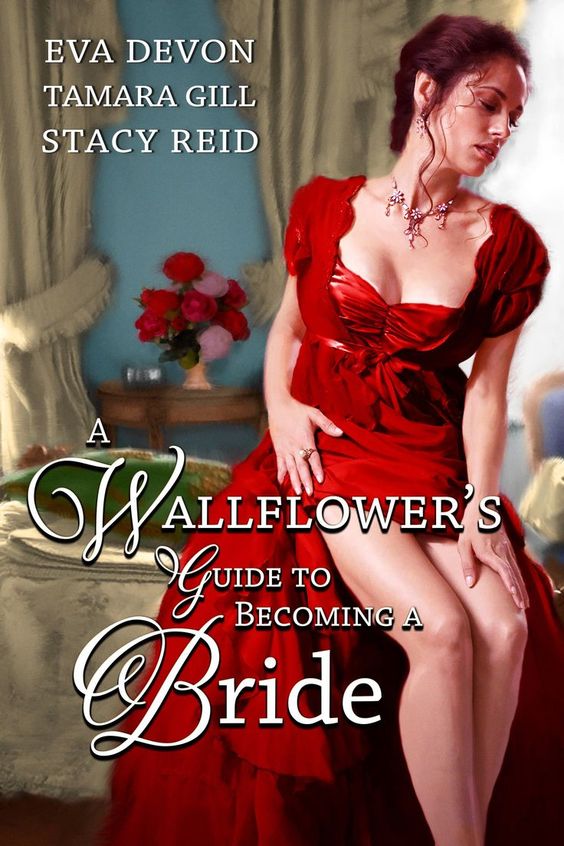 A Wallflower’s Kiss by Eva Devon

Lady Ophelia is the last of her sisters to be unmarried! She knows she has to find a husband, but she’s been on the shelf for three seasons. When she finds a mysterious guide in Hatchards she forms a plan!
It just so happens that her brother’s best friend is happy to help her practice the instructions in the guide. Until they’re caught of course! Can the guide lead to happy ever after, or will scandal ruin Lady Ophelia’s chances?

A Brazen Agreement by Tamara Gill

Miss Sutton Howard needs to marry, and soon, there are only so many years a lady can endure the title of Wallflower. After a disappointing first season and the many that followed, her sixth will be her last and most successful. The Wallflowers Guide will ensure her season ends well. All she needs to do is find a gentleman suitable to be her husband.
Logan Carleton, Earl Jersey, knows it’s time to find a wife, if only the one woman he had lost through no fault of his own several years ago, wasn’t still on the market and complicating his life in London. Their bickering is no use, and before they cause another scandal, they must work together to gain what they both desire, spouses, just not with each other.
But when two people are thrown together with an entwined history, complications arise, along with desires that may not be smothered a second time no matter how hard they try.

A Duke at Midnight by Stacy Reid

Miss Sarah Bellamy hopes to meet a gentleman at midnight, before she settles into the respectable and lonely life of a governess to two little girls. And her dreams come true. In the dark of the night, she is willingly seduced by a devastatingly handsome gentleman.
One night of bliss to discover he is not only a Duke but her future employer. A difficult adjustment to be so near and yet so far from the man of her dreams. She tries to suppress all hopes of more but finds herself inexorably drawn to the one man she knows she cannot have…
EXCERPT

A Brazen Agreement by Tamara Gill

When decidedly on the shelf, a lady must sometimes take matters into her own hands and throw rules aside and do what one must to gain a husband.

Sutton raised her brows. Well, what did that mean? Was the guide giving her permission to misbehave? She pursed her lips in thought before the sound of another patron talking nearby caught her attention. Sutton slammed the book closed and quickly slid it back under the bookcase just as a couple passed her farther down the aisle. Sutton left the store, walking back to Hanover Square with determined strides, her maid hard on her heels. One must take one's life into her own hands if one were to gain a husband.

Which would mean she had to be determined and go after what she wanted. She stopped on the footpath in thought. Did she like any gentleman enough for her to behave in such a way? To act instead of waiting for the gentleman to always come to her?

Sutton started off again, stepping around a large gentleman before slamming directly into a wall of muscle. She stumbled back, her footing beyond redemption before she landed with an oomph on the flagstone path. "Oww," she complained, stopping herself from rolling a little and rubbing her behind in a most unladylike way. She glanced up, about to give a set down to the oaf who had run into her before the words dried up in her mouth. The horrified sight of Lord Jersey met her eyes. Logan Carleton. Of course, it was him she had slammed into. No one else would get in her way like that man did.

Ass that he was.

About the author:
USA Today Bestselling author Stacy Reid writes sensual Historical and Paranormal Romances and is the published author of over twenty books. Her debut novella The Duke’s Shotgun Wedding was a 2015 HOLT Award of Merit recipient in the Romance Novella category, and her bestselling Wedded by Scandal series is recommended as Top picks at Night Owl Reviews, Fresh Fiction Reviews, and The Romance Reviews.
Stacy lives a lot in the worlds she creates and actively speaks to her characters (aloud). She has a warrior way “Never give up on dreams!” When she’s not writing, Stacy spends a copious amount of time binge-watching series like The Walking Dead, Altered Carbon, Rise of the Phoenixes, Ten Miles of Peach Blossom, and playing video games with her love. She also has a weakness for ice cream and will have it as her main course.
To be the first to hear about my new releases, get cover reveals and excerpts you won’t find anywhere else, sign up for my Newsletter
Website * Goodreads * Facebook * Twitter * Instagram
USA TODAY BESTSELLING AUTHOR, Eva Devon, was raised on literary fiction, but quite accidentally and thankfully, she was introduced to romance one Christmas by Johanna Lindsey's Mallory novella, The Present. A romance addict was born. She devoured every single Lindsey novel within a few months and moved on to contemporary and paranormal with gusto. Now, she loves to write her own roguish dukes, alpha males and the heroines who tame them. She loves to hear from her readers. So please pen her a note! evadevonauthor@gmail.com
Sign up now for chances at free books, fun stuff, secret book info and more at:
Website * Goodreads * Facebook * Twitter * Instagram *
Tamara Gill is an Australian author who grew up in an old mining town in country South Australia, where her love of history was founded. So much so, she made her darling husband travel to the UK for their honeymoon, where she dragged him from one historical monument and castle to another.
A mother of three, her two little gentlemen, a future lady (she hopes) keep her busy in the real world, but whenever she gets a moment's peace she loves to write romance novels in an array of genres, including regency, medieval, and time travel.
Tamara loves hearing from readers and writers alike. You can contact her through her website at@
Website * Goodreads * Facebook * Twitter * Instagram
Authors' Giveaway
a Rafflecopter giveaway
Posted by CCAM at 3:19 PM

This one sounds magnificent!