the key to unleashing chaos... - Between the Stars and the Abyss by Steve Holloway

"This novel has so much going for it. It is full of intelligent, inventive science, believable characters and a cracking storyline. [...] Pelagia is a well written, well thought out novel. It approaches a subject that as yet is not universally explored. [...] There are twists and turns and plenty to keep the reader interested." John D., Goodreads 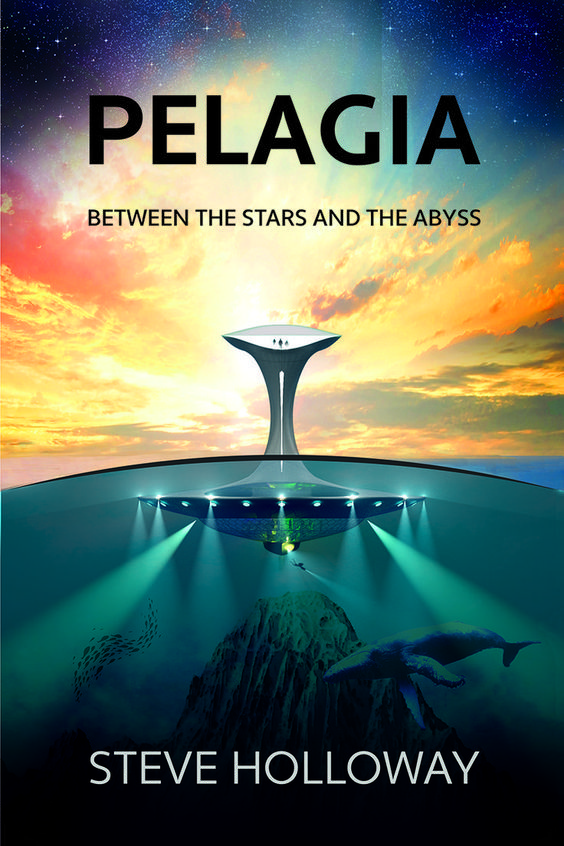 Description:
Published: 2021
Former special forces agent turned particle physicist Ben Holden is on the run.
The New Caliphate will stop at nothing to get their hands on his wife’s scientific research, which is believed to hold the key to unleashing chaos in the West and advancing their cause.
But in reality it’s Ben’s biometrics that have the potential to unlock the information they so desperately need. Within the oceanic world of Pelagia, in the year 2066, Ben finds sanctuary among the sea settlers of the South Pacific Pelagic Territory, but his respite is short-lived.
GUEST POST
Fiction to...Reality?

Many authors try to describe the future. However, seeing into the future is an imperfect art at best. I've read many compelling ideas of where we might end up, given current trajectories. Some authors picture the future asutopian, some prefer to predict a dystopian one. However, have you noticed that with the passing decades we actually reach one of these future worlds? And what we find ourselves in is simply a human future. A human future is one in which we have faced obstacles, challenges, even the evil of that day and somehow navigated through. Often there has been grievous loss and suffering. However, just as often, the future has turned out unexpectedly brighter we had imagined.

I have written a novel about a very human future, Pelagia: Between the Stars and the Abyss. This novel is speculative fiction and will take you on an unusual odyssey. This time, not into space or to distant planets. In Pelagia, my characters explore the final frontier here on planet earth: the Blue Frontier of our open seas.

What might we discover as we begin to create new nations on the surface of the ocean?  We have better maps of the Moon and Mars then we do of the ocean basins of our planet. We have invested more resources and developed more strategies in a bid to colonize distant planets than we have to settle and wisely steward the resources covering more than 2/3rds of this one.

In Pelagia, a Yemeni scientist named Suliman, an Italian inventor named Marcelli along with their families begin to build a community above an underwater seamount in the South Pacific Ocean.  In the process, they must cope with challenges all pioneers must face, marauding pirates, enemies seeking to exploit, undermine them and steal their resources.

I have invested many years of experience as a marine biologist in the story.  And I love science, and so carefully researched the technology in Pelagia to ensure that what I describe is plausible. It is a world our children and grandchildren might well live in: tuna herding, seamount settlers, growing homes from seawater, nomadic seastead vessels, communication and cooperation with dolphins, submersible aircraft, marine robotics, ocean farms drawing on nutrients from the deep sea. These are all within our reach today.

I suspect that settlers who live intimately within the rhythms of the sea will naturally care for that which sustains them. They do no harm to the delicate ecology of the oceans, and even begin to clean the mess our generation has left.

Still the beauty, freedom and wild wonder of the open seas enchant them. The dream of becoming politically independent nation states with control over their own destiny draws them forward. It is a rugged pioneer life that has the power to change history.

In short, I would love to live in a place like Pelagia.

About the author:
Steve Holloway grew up on the beach cities of Los Angeles and has always loved the sea. This passion led him to gain a degree in Aquatic Biology from the University of California Santa Barbara; a background which opened many opportunities for him in researching, developing, and engaging with mariculture activities around the world.
Steve and his wife have lived and travelled in many countries over their forty years of marriage, successfully raising three kids in exotic locations in the process. They have always engaged with the people and cultures they live among.
Currently Steve lives in England and consults for a Christian charity in areas of research, leadership development, adapting to new cultures, social enterprises, and mariculture projects. Currently he is consulting for a Indo-Pacific mariculture project – a social enterprise – growing sea cucumbers, a delicacy for the Chinese market.
Steve has always loved books and writing. The story of Pelagia reflects three of his passions: science, the sea and the narratives of faith. The background, in his words:
“I have for many years believed that settling the open sea was within our grasp, and even more accessible than space as our ‘next frontier’. So through the last ten years or so I have been thinking just how this might happen, what would be needed, where people would settle, what kind of livelihoods they might have on the open sea, beyond the EEZs of terrestrial countries. My son Adam told me about what would become a key component of Pelagia, Biorock or seacrete, because of his experiments with it. Many discussions with other scientists, engineers and others helped to begin to fill in the gaps and the concept of the Pelagic Territories, similar to the unincorporated territories of the early US, and what geopolitical contexts they would find themselves in.”
Steve finds any excuse to get into the ocean: sailing, diving, swimming, or just poking around tide pools.
Website ** Blog ** Goodreads
About the author:
a Rafflecopter giveaway
Posted by CCAM at 11:00 AM

Thanks, Marcy. The cover was actually done by my son who is an artist.

Wow! This book sounds really good! Added to my TBR!

Thanks, Mick. I hope you like it, it was very fun to write.

I am absolutely in love with the cover. ❤

I enjoyed the guest post and your book sounds like a very interesting and captivating read and I like the cover! Thanks for sharing it with me and have a wonderful day!

An excellent synopsis and excerpt, this sounds like a must read for me. Is this story a stand alone or is there a sequel in the works?

Lots of twists and turns - gotta love it!
Thank you for sharing this with us.

Thanks, everyone, for your interest and comments! Yes, I am working on a sequel - about 2/3rds through the first draft. But, of course this is probably only a quarter of the work to prepare it for publication.

If you are interested, follow along to the other stops on this tour. I've tried to make each entry unique and interesting. Thanks for visiting!

This has a fascinating and unique cover. Love it!

How did you pick the cover for the book?

After finishing a book - well just the one so far - I pull on my wetsuit and go for a swim. Simple pleasures.

My publisher gave me several cover art choices, but none seemed to capture the character of Pelagia. I was passing them around my family on social media, and my son asked if he could try his hand. He did several stunning layouts, that my editor jumped at. Only after they chose this one did I tell them the artist was my son.

I want to know about the Oceanic world. Good work.

Lots about the ocean here, Paige.

The book description is interesting. Thank you for sharing it.

Thanks again for your time and comments! Pelagia is amazing - not because I wrote it (smile), but because of the world it describes that is within our reach today.

Barbara - advice for writers? Well, first of course, write a lot. Get comfortable with your own style and voice - unique to you. Then, take the time to learn the craft of fiction writing. I thought I knew how to write, but writing fiction was a whole new thing. Just as a pointer must learn composition, perspective, colour, properties of light and shadow, etc. before doing their unique picture, there are many skills in writing we need to learn. Probably most importantly, though, is to seek out and value constructive critique. We almost never can be objective about our own work.

If you are interested, here is a blog I wrote about my own journey in writing:

I think the most fun part are the scenes in the book with the Battuta family - Sul, Gideon and Sophia. They are a nomadic seasteading family who, with others in their extended family, herd tuna around the South Pacific. Imagining their life was enjoyable. I also like developing the scenes for the seamount township, Marcelli Ring.

Thanks, Barbara. It has been fun writing the posts and interviews for this tour.

Ah, a personal question, Barbara. Hmm... well I believe the first time a book really gripped me to the point of a tear was probably finishing the Return of the King in the Lord of the Rings trilogy. I think it was the loss of wonder that the book had taken me to. Good question.

Personally I think the most important part of marketing is a good 'product', something people will want to read. If it is not something people want to read, all the best marketing techniques will not get you very far. I think the best product, good writing, comes from a combination of hard work, good research and being part of a group that gives valuable constructive critique and encouragement.

Just the one, so it is by default my favourite.

Thank you for a chance to win!