REVIEW - From Ashes to Magic (Anthology) by Various Authors

Ten authors, ten stories, all your favorite supernatural beings in one place. Welcome to the first-ever Supernatural Beings anthology. 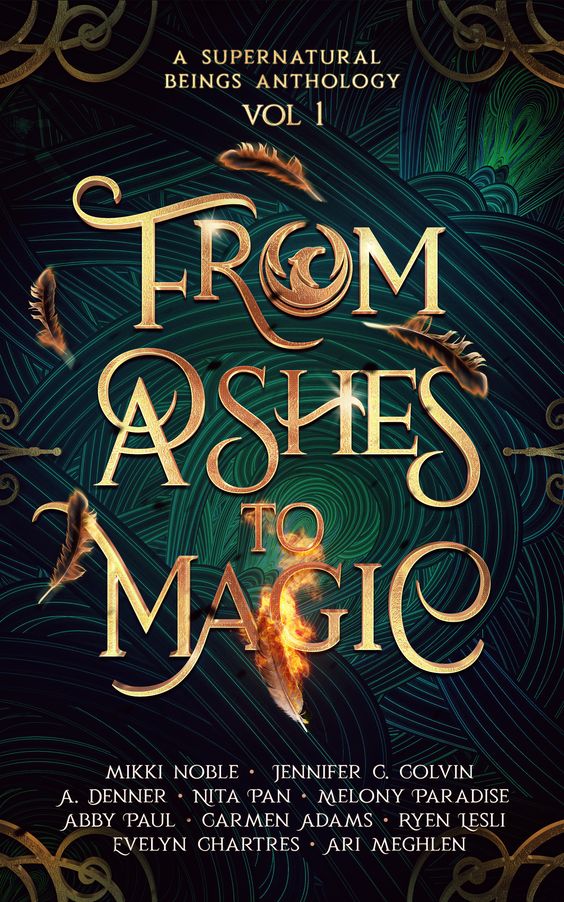 Once you plunge into these pages, you won't want to leave.

And I could stop here!

Writing a (good) short story is, in my opinion, harder than writing a full-length novel. The rules are stricter, space is definitely restricted. The author has to give all needed background information, to build the set and the tension, reach the climax and give the (unexpected) denouement in just a few pages. I was happy to discover not one, but ten authors who did a good to a great job, even if some rules were not respected.

My favourites are Can You Keep a Secret and Broken Promises. I also really liked the Life and Death (and the approached issues) but I would say that it is more of a poem than a short story. Given the differences between how we define the literary genres, maybe I should have said, instead of poem, dramatic poetry? With regard the Broken Promises, I would have not added the final part. Without it, this story will have ended with a bum, "drop the mic" effect. The reason for the last part should have been satisfied at the same time with the discovery of the truth. If these are my favourites, it doesn't mean that the rest of the stories are not interesting. I'm sure that they will be somebody else's favourites especially if we remember one of Kurt Vonnegut's short story rules: "Write to please just one person...".

In addition to the challenge of writing a short story, it comes the mastership of putting together an anthology. From Ashes to Magic contains stories which, while united by the central theme, are different and cover different genre(s), styles and supernatural creatures increasing this way the range of their future well-pleased readers.

So, yeah, even if you don't like what I like is still very probable that "Once you plunge into these pages, you won't want to leave."

It's when they creep out of the shadows that you should beware. The good ones will hold your hand when you're having a nightmare; the bad ones BECOME your nightmare, seeping into your very soul and burrowing in the darkness until they've completely taken over.

Ten authors, ten stories, all your favorite supernatural beings in one place. Welcome to the first-ever Supernatural Beings anthology.

Once you plunge into these pages, you won't want to leave.
****
REBIRTH A. Denner
Immortality always comes with a sacrifice. But how can Nova finish the deed when her Prey is the only one that can save her?

GABBY’S FUTURE Mikki Noble
A future-telling tree offers Gabby an unpromising future she must try to change. Will that change make things better or worse?

LIFE AND DEATH Nita Pan
Brimming with love and betrayal, the courtship between two gods explores what it means to have humanity. Is the divine romance between Life and Death doomed from the very beginning?

CHOSEN Jennifer C. Colvin
Stolen away to the Philippine Underworld by a mysterious goddess, dutiful and meek Bituin, a young girl from a small hidden mountain town on Cabu Island, discovers the gods have chosen her as a Babaylan (shaman). Newly imbued with powers beyond her wildest imagination, Bituin’s spiritual awakening sends her life into upheaval and rocks the foundation of her quiet town.

BROKEN PROMISES Evelyn Chartres
A young woman finds herself isolated from all she knows when her home is set ablaze. Despite insurmountable odds, she must risk traversing unfamiliar and hostile territory to find help, or declare her life forfeit.

CAN YOU KEEP A SECRET? Carmen Adams
Palkar Village is a bloodthirsty place for those of the supernatural, and after years of senseless persecution the Sorcerer community sought refuge elsewhere. For decades the Earth Sorceress Alina lived peacefully among her kind in a deep forest until one night of magic changed her world. The Sorcerer community lived in secret tranquility for decades...but would things stay that way?

SULFUR NIGHT Abby Paul
Cursed. Tainted. Marked. The children born on the sulfur night aren’t like the rest of us. They can serve only one purpose. Perhaps the new gods are as blood thirsty as the old.

THE LOCKSMITH Ari Meghlen
For Cara, a non-magical human, in a world of magic, picking locks is how she makes a living. Her quiet life is threatened when a mysterious traveler brings her a complex lock that makes her the target of a powerful enemy.

ORDINARY FAE Melony Paradise
The only way to hide from a Fae king is to live among humans – as a human. Can Izbella Rane have the normal life she wants, or will she be forced into a world her family fled from?

Authors' Giveaway
a Rafflecopter giveaway
Posted by CCAM at 3:00 PM

I love anthologies - they're perfect for getting a taste of new-to-me authors!

Sounds awesome, thanks for sharing your review!

Sounds great. Such an amazing cover!

Sounds great, I think I saw this yesterday

I love anthologies....so many different stories wrapped up in one book...