trapped forever between the past and the future… - A Crack in Time by Catherine St. James

At first, Sara thinks she’s hallucinating - prenuptial jitters, stress or an endocrine system malfunction - but she quickly finds out the bullets are just as real as her growing love for Clay… 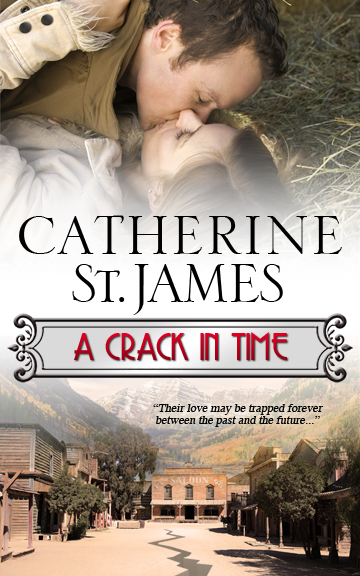 Sara Witherspoon is a beautiful and brilliant research microbiologist who calls herself “a crackerjack gene-splicer;” she’s about to marry Bruce Rule, a high-flying commodities broker.

But while visiting St. Elmo’s Fire, Vermont, Sara encounters an anomaly in the space time continuum and falls through a crack in time to the 1870’s gold rush town of Bury-Me-Quick Colorado, where she meets Clay Dunhill, a soft-spoken, gentlemanly outlaw awaiting trial for murder.

At first, Sara thinks she’s hallucinating - prenuptial jitters, stress or an endocrine system malfunction - but she quickly finds out the bullets are just as real as her growing love for Clay…

Sara sat up and looked around. It was daytime and she was sitting on a grassy slope next to a road. There was a mild, tingling sensation where the spark had hit her in the forehead. She stood up, feeling lightheaded. She could see a haphazard cluster of buildings‚ tents, lean-tos, and shacks stretched out along a tree-lined creek bed about half a mile away. A blue cloud of smoke hung in the air. And beyond was a majestic, snow-capped mountain range.

How could this be? A moment ago she was in Vermont with her aunt and Bruce. She obviously wasn’t in Vermont any longer. There were no mountains like this in Vermont.

She heard something approaching along the road. She turned and saw a horse-drawn buggy driven by a white-haired man. The driver stopped next to her. He was dressed in a black suit, a white shirt with a starched collar, a string tie, and a black-brimmed hat. Sara’s first thought was that he was Amish. Was this Pennsylvania? How did she get to Pennsylvania? But how could this be Pennsylvania? They didn’t have any high mountains like this in Pennsylvania, either.

“You all right, miss?” the man in the buggy said.

“Your horse throw you?”

“You look a little dazed. I’m Doc Clifford. You want my professional medical opinion, I think you should get in out of the sun. Get aboard, I’ll give you a ride into town.”

She got into the buggy and, with a flick of the buggy whip, the buggy lurched forward.

He leaned over and looked closely at her eyes. “When we get to town, maybe I ought to give you a good examination. Looks like you got a pretty good bump right in the middle of your forehead. Jarred your senses.”

He blinked at her, then flicked the reins of the horse. It sped up. “I think you might have a bad concussion there.”

The rough dirt road curved around the slope of the hill and carried them into town. There was a lot of construction going on and at first Sara thought it might be a movie set. The main street was curved upwards, with short side streets—little more than alleys—shooting off from it. A cluster of buildings in the center had board sidewalks and porches and a line of skinny poles holding up a single wire.

Smoke from a dozen cook fires and chimneys lay over the town like a blanket.

The buggy had slowed as they entered the town. The streets were crammed with wagons, carriages, mules, donkeys, and people‚ mostly men in flannel shirts and jeans and cowboy hats. A medicine man on the back of a garishly painted wagon was hawking his wares to half a dozen men and a couple women dressed in long skirts and bonnets and carrying parasols.

“What is this?” Sara asked. “Are you having frontier days or something?”

“I don’t catch your meaning. This is Bury-Me-Quick, Colorado.”

“Probably took the train to Denver and the overland stage from there. That’s how most folks get here.”

They were passing the jail. The gallows were under construction next to it.

“Who are they getting ready to hang?”

“Some gambler. Shot an unarmed man, so six witnesses said. Me, I wouldn’t believe any of them six witnesses if they swore the sun was high in the sky at noon.”

The horse had stopped. Sara got off the buggy.

“Young lady, you best come to my office!”

“I have to check something out.”

She went into the sheriff’s office at the front of the red brick jail building. Inside were a roll-top desk, a gun rack, and a pot-bellied stove. The walls were papered with wanted posters. Behind the desk, opposite the door, sat a fat, bewhiskered man in a rumpled suit with a striped vest. He stood up.

“Afternoon, siss. What can I do for you?”

The sheriff smiled. “I guess it wouldn’t hurt. A shame Clay got himself into this braggadocio, but I got to do what my sworn duty says I got to do, and that’s hang him at dawn tomorrow.”

“I wish I knew what’s going on around here,” Sara said. “Are you folks making a TV show or something?”

“I’m afraid I don’t know how to answer that, ma’am. You want to see Dunhill or don’t you?”

“I guess I do.” Sara felt a shudder of fear, as she sometimes did when she had to give a presentation. Her skin tingled.

The sheriff led her through a door to the back room. There were two small cells, one on the left, one on the right. A young deputy sat on a high stool against the wall opposite the cells with a shotgun in his lap. He nodded to her as a greeting and spat some tobacco juice into a spittoon.

The only inmate was sitting on a bunk tossing cards into his hat, humming a tune. He turned around. It was the man Sara had seen in the crystal ball, with the same cocky grin. His dark eyes lit up when he saw her.

Sara felt a rush of confusing emotions. Her heart fluttered. She was dizzy. She touched the spot on her forehead where she’d been hit with the spark. This was all some kind of crazy dream, she decided. That was the only explanation.

“I hope you don’t find me too forward,” Clay Dunhill said, “but could I know your name?”

“Do I know you, Mr. Dunhill?” Sara asked‚ approaching the bars to his cell. His gaze seemed so deep and he looked at her with such intense warmth and tenderness she couldn’t quite catch her breath. She was excited, yet frightened—she’d never felt this way before.

Clay Dunhill touched her hand through the bars. A jolt of electricity went through her and, in its wake, a warm sensation spread throughout her being. Her heart felt as if it would burst. Looking into his dark eyes stirred something deep within her and turned her incredibly soft inside.

But how could she feel anything for a complete stranger? Maybe she had inadvertently taken some kind of drug. She had read about fungi that caused people to hallucinate. Yes, that was it, that had to be it. She had taken some hallucinogen by accident. Maybe it was the lunch she had at a roadside diner in a little Massachusetts town she and Bruce had driven through.

“My old grandmother said once I was destined to meet a woman who would steal my heart. You might just be the one. Too bad I’m about to be hung.” 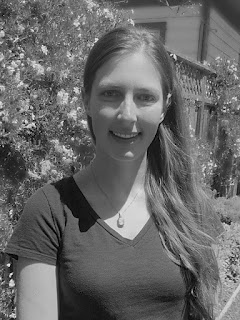 Catherine St. James wanted to be a writer as soon as she learned to read at age four.

She has an adventurous spirit and has traveled widely, including time in Ethiopia where she spent some months in a Coptic monastery praying, fasting, chanting, and meditating. She's an award winning short story writer and lives on a 28 foot sloop, Write-on!, in Northern California with her cat, Rascal. Recently she's met the love of her life and has yet to discover where this adventure might take her, and is eager to find out.