real or imagined? - A Shadow of Time by Louann Carroll

Consumed by a childhood filled with terror and pain, Kellyn O’Brien strives to create the perfect family.Then, disaster strikes. Her husband is dead. Three weeks later, she discovers her son is heir to Shadow Ley, a nineteenth century estate located in the Sierra Nevada foothills. 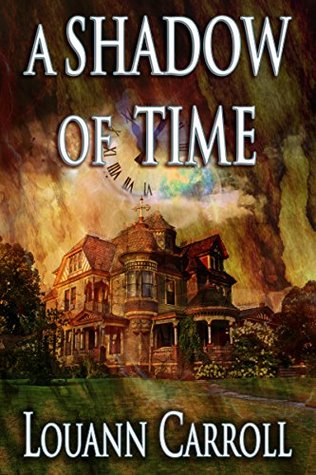 When young widow Kellyn O’Brien discovers her toddler has inherited the Shadow Ley fortune and estate, she thinks all of her problems are solved.

Unseen, a mysterious guardian dwells deep beneath the house. As the run-down mansion repairs itself, Kellyn is plagued by nightmares – windows into other dimensions that are as confusing as they are frightening.

Not sure what is real or imagined, Kellyn turns to her new friends for help. When they realize that their dreams are connected, they are determined to find the truth behind the unbelievable coincidence.

But the presence at Shadow Ley has something more diabolical in mind. And the friends must unravel the secrets before the insane entity takes more lives, beginning with theirs.''

Goodreads:
Consumed by a childhood filled with terror and pain, Kellyn O’Brien strives to create the perfect family.Then, disaster strikes. Her husband is dead. Three weeks later, she discovers her son is heir to Shadow Ley, a nineteenth century estate located in the Sierra Nevada foothills.

Still reeling from Michael's death, Kellyn moves to Shadow Ley. Soon after her arrival, the ordinary becomes the extraordinary: broken drinking glasses repair themselves, stair rails that were once old are now new, and suddenly the estate of Shadow Ley is not what it seems.

She turns to the local historian and hears the tale of Shanahobet, the portal guardian, and the Hutto-pah, a tribe of Native Americans related to the Maya. She meets John, a doctor, who experiences visions of other times and places. Her dreams turn into nightmares with windows into past lives, hints of multidimensionality, and the promise of life beyond death.

Legends abound and so Shadow Ley, the home Kellyn had hoped would bring peace to herself and her children, becomes mired first in doubt, then in terror, and finally in love eternal.

Consumed by a childhood filled with terror and pain, Kellyn O’Brien strives to create the perfect family. Then, disaster strikes. Her husband is dead of a massive heart attack. Three weeks later she discovers her son Scott, is heir to Shadow Ley, a nineteenth century estate located in the Sierra Nevada Foothills.

Shortly after, the dreams begin. The fetus she carries within her is a doorway into another world where ice and snow become Kellyn’s reality. Love encompasses her through a man she has never met and a child she may never know. She discovers the mansion sits upon an intersecting group of ley lines and where the lines intersect, they cause disruptions in the physical field.

Kellyn begins to wonder if life is just an illusion, a mere fragment of time that exists around her. She fears the puzzle of Shadow Ley is only visible to those who have eyes to see and for some reason she is blind. She fears for her children, for the one already born and the one whose life is yet to come. Most than anything, she fears Shenahobet, the portal guardian who guards the Gate of Time. The jinni exists in the depths of Shadow Ley and it is there Kellyn will overcome her greatest fear. She will fight the creature not only to save her children’s lives, but also to prevent the complete annihilation of their souls.

Louann Carroll is a Native Californian living in the Sierra Nevada foothills with her husband, Dennis. Mother to three children and grandmother to seven, she is an avid rock, fossil, and gem hunter, who enjoys sharing her finds with family and friends.

She is a student of alternative religion, archaeology, anthropology, and paleontology.

Louann has written numerous radio talk shows, articles on adoption, and is the author of Innocent Blood, Gemini Rising, The Light and the Flame, and The Journey Series, heartfelt childrens’ books about the challenges of life.