A haunting trio of short stories about love, obsession, and secrets. Each short story is titled after a song, The National's Apartment Story, Placebo's Scared of Girls, and Skunk Anansie's Post Orgasmic Chill. 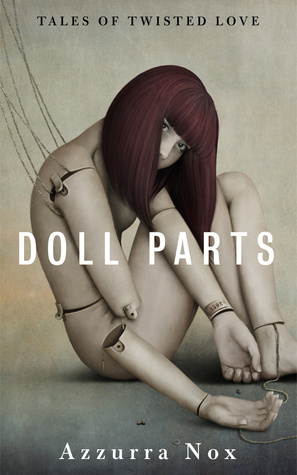 A haunting trio of short stories about love, obsession, and secrets. Each short story is titled after a song, The National's Apartment Story, Placebo's Scared of Girls, and Skunk Anansie's Post Orgasmic Chill.

Apartment Story
A lonely married woman nostalgically rekindles a friendship with a former lover and the apartment they shared. Dark secrets and mysteries surround the apartment building and its new tenants that delve deep into the woman's psyche and prove to be fatal.

Scared of Girls
A glamorous go-go dancer and a failing university student are bound by a dark secret that may change their fates forever.

Post Orgasmic Chill
The destinies of a cynical rock star, a groupie, an arrogant DJ, and naïve university student intertwine in a rainy London that serves as the backdrop to their tormented lives. Secrets and lies coincide in this dark tale of love gone wrong.

Hauntingly spare, beautiful, and twisted, Doll Parts is a disquieting and at times darkly morbid collection of short stories about normal people who suddenly discover their own dark possibilities.

It all began with a scent. I'm not quite certain when I first became aware of it, although it was a recent occurrence. Maybe the scent was always there, hidden and obscure. I couldn't quite pin-point a way to describe it. It was a mixture of fallen rain on asphalt and musk. The first time I noticed it I was sitting on the bus, inching towards midnight, returning home. Another time, I was at the entrance of a theatre, where a young man wrapped in melancholy handed me a ticket without looking up. The scent came suddenly and randomly.
The only thing these two events had in common, was that in each case, I was thinking about a certain moment from my past. That moment was my stay in Milan when I was a student at the Bocconi University. My parents kept the apartment I stayed at while I was a student there long after I got married and moved to Bologna. I hadn't thought about that apartment in a long time until my mother recently passed away and I was sent a letter notifying me that she had left me that apartment, while my brother and sister got everything else that remained.
I was a promising student. I had graduated with a score of 110 with honors in Art History. I had written a thought provoking thesis on the influence of religion on art, and how paganism as opposed to Christianity stunted creativity. I really thought I was going to go places. My parents thought the same thing. Nobody was expecting me to become a famous artist, but at the very least to become an art critic for an important literary magazine. But after graduation, none of that occurred.
I grew so depressed that I would sit around the house watching afternoon TV like a bedridden old lady. My boyfriend at the time, Stefano, who would later on become my husband, ended up getting a job in Bologna as a chemist for a cosmetic brand and he asked me to move with him. I had nothing to keep me in Milan, and so I uprooted all my dreams and followed him. My husband couldn't begin to tell you the difference between a Monet and a Van Gogh, and yet, people hung upon his very words for an opinion. I know that not everyone breathes and lives art, as I did at the time, but I'll admit that I was a little jealous that my intellect went overlooked, while my husband was invited to conferences around the world for launches of new products all the time.
So maybe it's been my recent feeling of dissatisfaction over having to wait weeks for Stefano to return that has made me think of about my college years in Milan. And perhaps that's why I started to notice that scent again. To be honest, I'm not even quite certain that one could even call it a distinct scent, as it's so faint. But it lingers, almost throbs with a heart of its own. But no matter how much I strained to capture it, to fully grasp its identity, I always fail. The scent is always vague, and although I feel as though it reeks of rain and musk, I could be entirely mistaken. All I'm capable of grasping is the sensation I'm left with after noticing its presence. It's an empty sort of feeling. The kind of feeling you get when you hug a lover goodnight and then get into your car, and notice that no matter how much time they spent holding you prior to that moment, you are now alone, in your car, and cold. But maybe, even having this description won't render the true feeling of the scent.
A call came from a former lover on a cold, rainy afternoon in the middle of February. It was a miserable day that I spent it wrapped up in a bulky cashmere sweater and hiding out in bed. I was too lethargic from apathy to get up and feed the cat, despite its numerous attempts to get my attention.
“Sorry to call you after all these years,” she said. At first I didn't recognize her voice. “It's been almost sixteen years, and I don't expect you to remember me, but at the same time, I kind of hope that you still do.”
“How did you get my number?” My tone was far more accusatory than I intend it to be. But a part of me was guarded as to why she had gone by all these years without a word, and to suddenly show up out of the blue uninvited.
“Nowadays you can find anything on the internet.”


This was true, but it didn't quite answer my question. Why now?

Goodreads ** Amazon
About the author:
Born in Catania, Sicily, she has led a nomadic life since birth. She has lived in various European cities and Cuba, and currently resides in the Los Angeles area. Always an avid reader and writer from a young age, she loved entertaining her friends with ghost stories. She loves horror movies, cats, and a good rock show. She dislikes Mondays and chick-flicks. CUT HERE, her debut paranormal urban fantasy was inspired by a nightmare the writer had a few years ago. Some of her favourite authors include Anne Rice, Oscar Wilde, Chuck Palahniuk, and Isabella Santacroce.

I like short fiction, particularly that which leans towards the macabre, so these strike my fancy.

Thank you for the chance :)

I enjoyed reading the excerpt and learning more about this book of short stories. These stories sound very interesting and intriguing! Totally looking forward to reading this book!

I love collections of short stories :) Definitely put this on my wish list!

The cover is so fantastic! :(

I love short stories, and that cover is awesome! Very imaginative!

After reading the excerpt I definitely want to read the rest of this.

I love that the author is from Italy. I have always wanted to visit there.