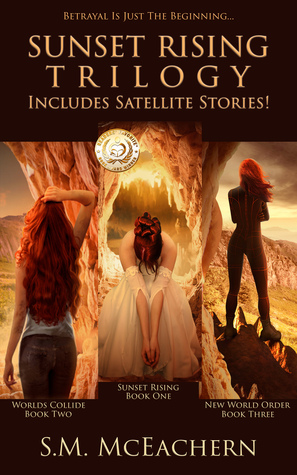 Sunset Rising: Born a slave inside a government biodome, seventeen-year-old Sunny O’Donnell becomes a pawn in a political plot that sparks a rebellion. Accused of treason and facing execution, she escapes with a man she considers an enemy and discovers she not only has to work with him to survive, but also lead the revolution.

Worlds Collide: Sunny and Jack must continue a life of subterfuge in order to stay alive and find a way to free the Pit. But in their attempt to save the urchins, they uncover the horrifying truth about President Holt and the evil he could unleash on the world.

New World Order: While Sunny and Jack struggle to find each other in the lawless post-apocalyptic world, tensions between the Pit and the Dome escalate. In the action-packed conclusion of the Sunset Rising Trilogy, friends will become enemies and enemies will become friends on a journey that will lead to a new world order.

Satellite Stories: For the first time in ebook format, the seven satellite stories are included with the trilogy. Find out what’s happening in the Pit between books one and two, and get a closer look at some of the other people in Sunny’s life.

If you’re an avid reader of young adult fiction, odds are you already know the origin of the currently trending #MorallyComplicatedYA, but for anyone who doesn’t know, here’s the low down: a debut author pens a young adult story starring a seventeen-year-old girl, which garners the attention of the publishing industry, including a movie deal, and when interviewed by Publishers Weekly about his recent success, he remarked, “…the morality of (my) book is more complicated than a lot of YA…”[1]

At first glance, the hypocrisy is obvious: by claiming his work is morally superior, he is behaving immorally. Dig a little deeper and we begin to understand the outrage over a supercilious thirty-something-white-male debut author strutting into the virtual YA Reading Room and declaring to the predominantly female community that his book is better. And there is evidence to suggest that this was his motivation to write a YA in the first place. In an author interview on the blog The Pen and Muse Book Reviews, the author answers the question, “Tell us about your book. How did it get started?”

“As the father of two daughters, I became pretty appalled at the image of women they received from the culture. It was all princess-this, Barbie-that. It was almost a satire of femininity. My wife—a very strong, highly-motivated attorney—was appalled too. What century were we living in if the feminine ideal little girls learned about was still a woman in a pink dress and a nineteen inch waist? I decided to create a female heroine who was the opposite of all that—a young, strong female who discovers real heroism within herself.”[2]

And in an excerpt from his book, as originally independently published, his heroine muses:

“I pull a book out of my backpack and lean against the door as the train shoots through the tunnel under the river for Queens. It’s a novel with a teenage heroine set in a dystopian future. Which novel in particular doesn’t matter because they’re all the same. Poor teenage heroine, having to go to war when all you really want is to write in your diary about how you’re in love with two different guys and can’t decide between them. These novels are cheesy, I know, and I suck them down as easily as milk.”

His heroine starts out as a slightly overweight 17-year-old girl who transforms into a “lean warrior” and dyes her hair fire-engine red before setting out to find her kidnapped father, and who “faces ‘all sorts of morally ambiguous choices,’ and often shoots first, asks questions later.”[3] The same PW article goes on to report that some publishers had concerns with the level of violence.

Although not a big fan of senseless violence, I love a story where the underdog prevails and the bad guy/girl gets what’s coming. It’s entertaining. But what complicated moral high ground are we to glean from a teenage heroine who has to change her physical appearance by shedding pounds and dying her hair fire engine red in order to transform into a young, strong female who discovers real heroism within herself, and whose penchant for cheesy, cookie-cutter, romance infused dystopian stories is her weakness? Because this is not the opposite image of a culture that pressures girls to be thin and pretty. And doesn’t the ebook industry owe a large amount of its success to female patrons trading in their paperbacks for the anonymity an ereader because they’re fed up with being judged by the books they read?

Creating an edgy female hero with the balls to shoot first and ask questions later is not new, nor is it morally superior. It’s the same old antiquated rhetoric of the might-is-right dogma deeply rooted in a male-dominated society that values physical strength as power and shames anything considered feminine as weak and inferior. Case in point: chick lit. Despite romance almost always topping the bestseller lists, romance books are popularly viewed as trashy and rarely recognized as “literature.” Love and romance are generally accepted as the frivolous pursuits of women, and the author’s quip in his novel, Poor teenage heroine, having to go to war when all you really want is to write in your diary about how you’re in love…, is a condescending put down of that pursuit. If the author’s idea of feminism is for “girly-girls” to shed their female tendencies and adopt the might-is-right approach, then he’s missing the point about equality.

Equality isn’t about being the same; it’s about dignity. Although gender issues differ from culture-to-culture and region-to-region, at the heart of the problem is this: girls should not be persecuted, subjugated, or in any way made to feel ashamed or inferior for being a girl. It’s become so ingrained in our culture to show disdain for “girly” things that childrearing isn’t even considered a valuable occupation, despite the crucial role it plays in the survival of our civilization. Seriously. It isn’t women who need to change. Wearing pink isn’t the issue; being judged for wearing pink is.

A more enlightened path to equality for all is the recognition of rankism within our culture and its destructive influence:

Rankism is what people who take themselves for “somebodies” do to those they mistake for “nobodies.” Whether directed at an individual or a group, rankism aims to put targets in their place and keep them weak so they will do as they’re told and submit to being taken advantage of.[4]

The higher the rank, the better the privileges, and the more motivation there is to protect rank status. Consider that in western society pay equity schemes were first introduced in the 1960s, yet in 2015 women are still paid on average $11,000-$12,000 less than their male counterparts with similar skills and qualifications.[5] Consider that in Canada the average wage for an early childhood educator with a university degree is on average $15 per hour, compared to a garbage man with a few days to a month’s worth of training at $19 per hour.[6] Putting the onus on women to become more like men is neither feasible nor beneficial to society as a whole.

A more equitable path to equality is dismantling rank and exposing sexism, racism, homophobia, and condescension and working to eradicate it from our culture. This is a concept I studied while earning my degree in International Development, part of my core course that placed emphasis on exploring my own tacit assumptions and how they influence my decision-making. Bias’s, prejudices and stereotypes exist within us all; recognizing them and how they influence our affect on society is the first step toward change and, ultimately, attaining equality. There should be dignity for all, always.

For anyone who has read the Sunset Rising Trilogy, you may recognize rankism as a central theme (hey, it’s a book blitz, I gotta work in some shameless self-promotion). My story labels groups—urchins, domers, heathens—which represent dysfunctional precincts within our own global society. The trilogy ends with a quote from “Pacem in Terris,” A human being has the right to respect and dignity of the human person,[7] as a literal departure from a dystopian society in pursuit of a utopian future, with the emphasis being placed on the need for society to change its core values.

Okay, shameless self-promotion over. Getting back on topic, this essay is about how a white-middle-aged-male author pissed off the predominantly female YA community by announcing he’s written a better, more morally complicated heroine. He wrote his debut novel in a genre he has shown nothing but disdain toward (there’s even evidence to suggest he doesn’t read YA), the plot of which perpetuates a might-is-right role model for young girls as a way to elevate their rank within a male dominated society that devalues anything considered feminine. To add insult to this injustice is another white-middle-aged male excited to make it into a movie. Damn straight women are outraged. It really is time for men to stop telling us how to be women.

It’s highly unlikely I’ll read the book in question or attend the movie because I’m not fan of intense violence. But hey, at least his protagonist is unique in that she has red hair, right? (You didn’t really think I was going to let that slip by did you? Sunset O’Donnell would be so disappointed in me. LOL!).
Cheers - Susan
PS – You may have noticed I didn’t mention the author by name or the title of his novel. That was deliberate non-promotion.

About the author:S.M. McEachern (also known as Susan) comes from the rocky shores of Canada’s East Coast. As a resident of Halifax during her early adult years, she attended Dalhousie University and earned an Honors Degree in International Development Studies with a focus on ocean development. Throughout her academic studies and early career, Susan had the privilege to study and work with Elizabeth Mann Borgese (daughter of nobel prize winner, Thomas Mann). An author in her own right and a political activist for world peace, Mrs. Mann Borgese played a significant influence on Susan’s view of the political world stage.

Sunset Rising is Susan's debut novel, which was published in November 2012. The second novel of the series, Worlds Collide was released in March 2014 and she is currently working on the third book of the series titled, New World Order, due to be released January 2015. For writing inspiration, Susan likes to go on long walks with her iPod (Keane and Moby are among her favorites). A few fun facts about Susan: she loves lattes, red wine, snorkelling, hiking and talking about herself in the third person.

If you'd like to read some satellite stories on the Sunset Rising series, visit her

I'll say Happy Holidays to all since this is international and there's many different countries that read this blog :)

Merry Christmas to all

Merry Christmas to everyone.

Merry Christmas to Everybody!

I wish a very Merry and very Bookish Christmas to everyone! :)

It's a little late, but I hope everyone had a very happy Christmas! :)