How dumb can a criminal be? - Professor Birdsong's 117 Dumbest Criminal Stories: The Southwest 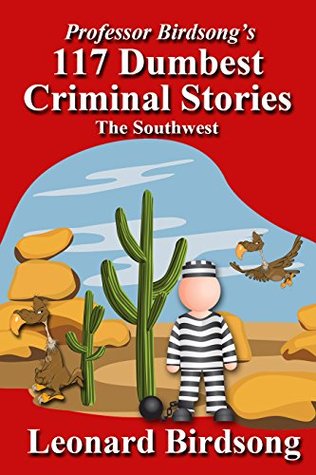 How dumb can a criminal be?

Dumb enough to make you laugh out loud at these true stories of really dumb criminal activity.

Readers will chuckle at:

• the cross-dressing San Diego man who went on a rampage in a Denny’s restaurant when he believed his cell phone had been stolen;
• the story of the California man arrested for hoarding and keeping more than 400 snakes in his home;
• then there is the Texas “panty robber’ who for two years broke into homes and stole women’s underwear;
• the one about the Dallas woman who bit off her boyfriend’s lower lip while kissing him at midnight at a New Year’s party – she was charged with aggravated assault;
• the Texas bank robber after receiving the loot tipped the teller with one of the $20 bills she had just given him;

Hello to all the readers out there. Let me answer a couple of questions that readers are curious about. Namely, readers often ask am I a real law professor and am I really a lawyer? Well folks the answers are: yes, and yes! I graduated from Harvard Law School, passed the Bar Examination and went to work for four years for the law firm of Baker Hostetler, a large nationwide law firm where I did tax and litigation work. I now teach at the Barry University School of Law in Florida.

So, some people then ask how did you get to be a law professor and why? These are fair questions and I will try to answer them for you with this post.

I had a wonderful twenty- five year career as a trial lawyer and a diplomat. After my four years with the Baker Hostetler law firm I applied and was selected by the U.S. State Department to be a Foreign Service Officer. My first two overseas assignments were in Nigeria. After my second assignment in Nigeria I transferred over to the U.S. Department of Justice to work in my hometown of Washington, D.C. as a federal prosecutor for the District of Columbia where I worked for five years. I then spent a sixth year on assignment as a federal prosecutor to the U.S. Virgin Islands. I then transferred back to the U.S. State Department and resumed my work as a Foreign Service Officer with postings in Hamburg, Germany and Nassau Bahamas.

After my Bahamas tour I decided to leave government service and open my own law practice in Washington, D.C. where I did mainly trial work that centered on criminal law defense and representation of clients seeking political asylum in the United States. After ten years of practice and numerous trials, I thought about slowing down a bit and wished to do some teaching and writing. In 1998, I got the chance to come on board at a new Florida law school – Barry University School of Law. I have been here ever since. Barry allows me to write and teach. It is a wonderful job. The legal and diplomatic experience I received over the years have helped me to become a good teacher. I hope to continue teaching and writing humor books for a few more years. Professor Birdsong received his J.D. from the Harvard Law School and his B.A. from Howard University. He teaches law in Orlando, Florida. After graduation from law school he worked four years at the law firm of Baker Hostetler. He then entered into a varied and distinguished career in government service.
He served as a diplomat with the U.S. State Department with various postings in Nigeria, Germany and the Bahamas. Professor Birdsong later served as a federal prosecutor.

After leaving government service, and before he began teaching, Professor Birdsong was in private law practice in Washington, D.C. Find Pfr Birdsong on his:

What, no criminals from Florida? We have our fair share of dumb criminals here too, unfortunately. It will probably take Professor Birdsong 10 years to write about the criminals here!