I cannot say just how much I have enjoyed this book … a very accomplished writer with a wonderfully rich imagination and an incredibly inventive mind. Readers will come to love the many wonderful creations in this novel, it is jam-packed with the most wonderful and inventive characters; new, exciting and beautifully realized. ~ Cherry Mosteshar, author of Unveiled: One Woman’s Nightmare in Iran 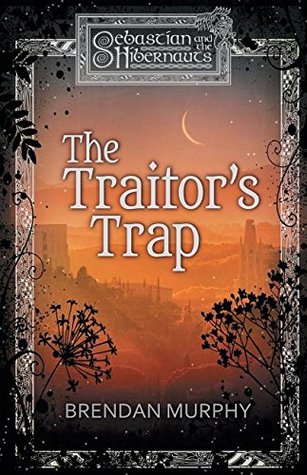 It’s tough being a thirteen-year old schoolboy, especially when you’re a coward and the big brother who stuck up for you is dead. Oh, and you’ve been thrust into a magical realm you’re expected to save single-handedly. Sebastian Duffy has to learn an awful lot of skills in a hurry if he is to defeat Phobitor by stealing the Spear of Lugh from the peace-loving Tuath. He’s been given some help of course–a mercurial sorceress, an orphaned druidess, a taciturn warrior, a snuff-sniffing leprechaun and a lovelorn poet– an outfit known as the Hibernauts, but can he really overcome a psychopathic, warmongering god when half the realm is bent on his destruction? If he is to have the remotest chance he will have to do deal with aiia, cluricaun, brigands, woodwose, undead warriors, speckled bats, spies, hunkypunks, traitors, skeletons and battle-swine first. And are those Tuath really so peaceable? If only he could find his courage.

They descended into the hubbub. Tuathans swarmed the thoroughfares, some in shimmering robes, others in simple garments. Many appeared to be heading home, eager to make the most of the big day ahead. Sebastian was sure they would be spotted, not least on account of Porrig and Quilliog’s shortness, yet no one paid them the slightest bit of notice, except to apologize when they bumped into them. Crazily happy to be there, his eyes darted joyously about the festooned streets. Ribbons of tinsel flew of their own accord, vying for attention with the countless floating baubles that glowed different colors, expanding and contracting like bubbles.

Elsewhere, paper lanterns drifted about, folding into different shapes at will, first one was a dragon, then it was a ship, now it was a castle. Adults cheered and children squealed as minstrels jostled them, tumbling and juggling, and musicians wove through the crowds playing ethereal music on instruments Sebastian had never seen before, bell cymbals and fairy fifes, bodhraìn and hand-harps. He was enthralled to see stately white stags drawing slowly progressing carriages, their happy occupants leaning out to greet strangers and wave hats. Ladies in fineries rode upon fallow deer with reticulated bridles of silver, while children sat upon prickets and fawns. Hawkers sold red ale from huge barrels off the back of carts drawn by wooden-yoked oxen and street vendors bawled out their wares. Some sold warblers—blackcaps and chiffchaffs—that trilled exquisitely as they perched tamely or flew above the crowds, always returning to their stall, others sold the rarest herbs, virtually unobtainable in Hibercadia— wintersweet and maidenhair, featherfoil and foxtail—and the other Hibernauts had to peel Roisin from the stalls. Sebastian was so enthralled by all that he saw that he hardly noticed his littlest fingers beginning to pulsate.

An imaginative epic…an intricate and fully realised fantasy world with a big cast of likeable characters that are charming, well drawn and endearing, with wonderfully apt names. The depth and breadth of the author’s high-voltage imagination, and the richness of the world created is very impressive. ~Sam Mills, author of Blackout, The Boys Who Saved the World, and The Quiddity of Will Self

Brendan Murphy was raised in Sheffield, England, with dreams of becoming a writer, and has written every day since he was nine years old. After reading medicine in London and psychiatry in Manchester, he moved to Australia in 1999. He is an Associate Professor at Monash University and has written widely on youth mental health. His nonfiction work on the development of football in Victorian society, From Sheffield with Love, was published in 2007. He is contracted to Assent Publishing for his six-book fantasy series, Sebastian and the Hibernauts. The first adventure, Beyond the Gloaming was published in 2014 and the sequel, The Traitor’s Trap, in 2015. He is a columnist for Aontacht magazine. He lives with his wife, Katrina, and their children, Sebastian and Violette, in a sprawling property built for the composer, Dorian Le Gallienne. They share their garden with a mob of kangaroos, a wombat, two possums, any number of creepy crawlies, and some very feisty kookaburras.