The Faberge Secret by Stephanie Burkhart

Elise Goodwin operates a heritage museum in Brattleboro, Vermont. Needing to buy some items for her museum, she travels to Boston and acquires a delicious surprise that would excite any curator – a Faberge Egg. 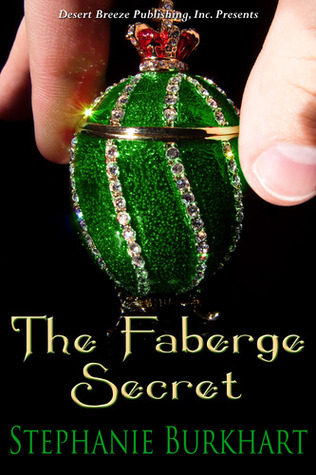 Elise Goodwin operates a heritage museum in Brattleboro, Vermont. Needing to buy some items for her museum, she travels to Boston and acquires a delicious surprise that would excite any curator – a Faberge Egg.

Enter Russian businessman Dimitri Romanov, the true owner of the jewel. He's following a lead hoping to reacquire his stolen egg when he bumps into Elise. He can't hide his attraction to the petite brunette with doe-like eyes.

Dimitri's rival, Gustav Kelch, wants the rare Faberge jewel and will do anything to find it, including destroying Dimitri's life. Can Dimitri keep Elise and his Faberge heirloom safe or will his attraction place their lives in jeopardy?

A loud crash and the shattering of glass thundered through the room. Elise wrapped her arms around Dimitri's waist and pressed herself to him. Her shoulders tensed.

"What was that?" he asked, lowering his voice to a whisper.

"I think someone just broke into the museum." Elise bolted from his arms and lunged for her phone.
"What are you doing?"
"Dad always told me to call nine-one-one first, then call him."
"What is nine-one-one? Your emergency response?"
"Yes." Elise paused, then said into the phone, "This is five-thirty Main Street. Someone has broken into the Heritage Museum. They're still there."

Dimitri fisted his hands. He couldn't let the intruders find Elise in the apartment. He had to go down there. He bolted for the door.

"Dimitri, what are you doing?"

He ignored her, flung open the door, and raced down the stairs. His footsteps rang in his ears as he dashed through the hallway, entering the museum through the back, then ran into the main display room. Two men dressed in black with ski masks over their faces looked up at him. Dark shadows from the outside street lamp filled the main room.

"Stop!" Dimitri yelled in Russian, letting his eyes get used to the low light.

They froze, caught off guard by Dimitri's voice.

About the author:
Stephanie Burkhart is a 911 dispatcher for LAPD. She was born and raised in Manchester, New Hampshire.
After serving 11 years in the US Army she currently calls Castaic, California her home.
Stephanie was married in Denmark in 1991 and has two young sons. She adores chocolate, is addicted to coffee and enjoys early morning walks. She's also an assistant den leader for her son's Cub Scout den and is a Boy Scout mom.
She writes paranormal, contemporary, and steampunk romance and has two children's books published with 4RV Publishing.

Thank you for the giveaway! :)

Thanks so much for having me here today. "The Fabrege Secret" is a great holiday story. Here's a link to the book trailer: BOOK TRAILER: http://www.youtube.com/watch?v=nf5ujOoDRXs

When do you do your Christmas shopping? Throughout the year, Black Friday, Cyber Monday or during the Christmas season?