Rumours of Magic and War...- True Magics by Erik Buchanan

Thomas Flarety, Captain of the Student Expeditionary Company and hero of the battle for Frostmire, thought that convincing the Academy to take Eileen as their first female student in more than 200 years would bring him trouble enough. Then stories of Thomas’s magic reached Hawksmouth. 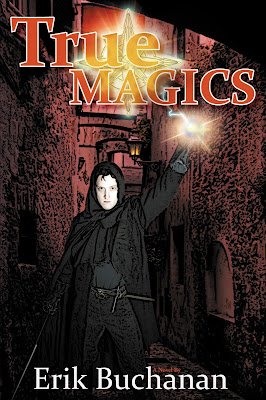 Rumours of Magic and War...

Thomas Flarety, Captain of the Student Expeditionary Company and hero of the battle for Frostmire, thought that convincing the Academy to take Eileen as their first female student in more than 200 years would bring him trouble enough. Then stories of Thomas’s magic reached Hawksmouth.

Now, Thomas’s friends have started disappearing. The king has ordered Thomas to keep his magic hidden and to find the other magicians in the city. The Cult of the Daughter wants Thomas for one of their own. The Archbishop wants Thomas to surrender to the Inquisitors and redeem his soul, and preachers are raging in the streets against witchcraft, the Academy and the king.

With Hawksmouth falling into chaos and the Academy divided against itself, Thomas must save his friends, find the other magicians, and decide what to do with his magic before the struggle between the king and the archbishop turns into an all-out war that will destroy everyone and everything he loves. 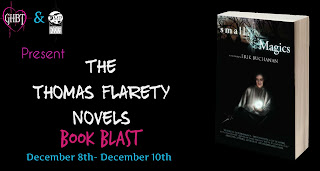 Erik Buchanan started reading at age two and has been hooked ever since. He met the Hardy Boys when he was six, Bilbo Baggins when he was eight, and cried for an hour when he was ten because that really shouldn't have happened to Frodo toward the end of The Two Towers. It was also at age 10 that Erik thought, "maybe I could write a story."

Before he was 12 Erik had attempted a book, an epic poem in rhyming couplets and various bits of stories and poetry. In high school he kept writing, and managed to create an impressive portfolio of maudlin teen-age angst-filled poetry that has thankfully not survived.

It was in his last year of high school, in the creative writing class of Mr. Robert Currie, a great English teacher, writer and poet, where Erik where he had the first vague notions of "being a writer." He kept writing through university, even as the theatre sunk its teeth and claws into him. He came out of university with a B.F.A., a pair of black belts, and a desire to be on the stage.

Erik moved to Toronto and spent thirteen years pursuing (but never quite catching) a career as an actor and a fight director. He wrote his first novel in a small attic room in a downtown rooming house, sitting on a cushion on the floor with his laptop perched on a box in front of him. Shortly after, he wrote "Small Magics," then "Cold Magics."

Erik is has just finished writing "City of Phantoms," a young adult novel set in Victorian England. He is now writing the third book in the Magics series while he edits "the King Below" (another fantasy novel he has written) and "City of Phantoms," and still works on that zombie movie.