I am not what you see. - Walking Heartbreak by Sunniva Dee

Don’t judge me.
I am not what you see.
I am the opposite.
—Nadia’s lipstick note on Bo’s mirror. 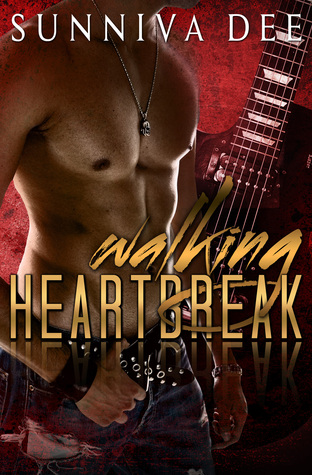 Don’t judge me.
I am not what you see.
I am the opposite.
—Nadia’s lipstick note on Bo’s mirror.

Indie-rocker Bo Lindgren is worshiped for his looks and musical genius. It’s been lonely at the top since his ex left. Bo will never take a girlfriend again though, because he doesn’t have the chops to love. He knows he’s poison, a heartbreak waiting to happen for anyone he allows too close—like his ex. Bo screws his way through the fangirls until he’s sick of it all. Until the dark gaze of Nadia Vidal appears in the door to his dressing room.

Saved from an arranged marriage by Jude, the love of her life, Nadia eloped and got married at nineteen. But now, two years later, life is wilted, dead, and not what anyone should have to endure.

Nadia, with her secret-keeper eyes and instant understanding of who Bo is, attracts and fascinates him without even trying. The ring gleaming on her finger should keep them apart, but morals can’t always resist destiny.

When brokenhearted meets heartbreaker, whose heart is really at stake?

I let her walk toward the exit. I watch her shoulders sag, and she’s small, beautiful, and I love every detail about her. Her sadness, her joy, the thoughts she doesn’t share, her skin against mine, her heat and her light snores when she sleeps tangled with me.

I’ve only known her for five weeks. In those weeks, I’ve learned everything and nothing, and for each seed of new knowledge, each nugget of information about her life, even her marriage, I need more.

She thinks I’ll let her leave. I drop a stack of my per diems on the table and get up just as she reaches the front door. The restaurant is quiet. Quiet enough for her to discern my voice when I say, “I’ll be knocking on your door.”

She twists quickly, long, dark locks swinging over her shoulder, and stares at me. Well-deep doe eyes storm with feelings, and my balls tighten on instinct; how hot is it to find a whirlwind of desire, anger, hope, and exasperation in the stare of a woman? It makes me want to break her. Turn her into lust, bring her to where the only one she wants is me.

Sunniva was born in Norway, the Land of The Midnight Sun, but spent her early twenties making the world her playground. Southern Europe: Spain, Italy, Greece—Argentina: Buenos Aires, in particular. The United States finally kept her interest, and after half a decade in California, she now lounges in the beautiful city of Savannah. Sunniva has a Master's degree in Spanish, which she taught until she settled in as an adviser at an art college in the South.

Sunniva writes New Adult fiction with soul. Sometimes it's with a paranormal twist, like in Shattering Halos, Stargazer, and Cat Love. At other times, it's contemporary, as in Pandora Wild Child, Leon's Way, Adrenaline Crush, and now Walking Heartbreak.

Sunniva is the happiest when her characters take over, let their emotions run off with them, shaping her stories in ways she never foresaw. She loves bad-boys and good-boys run amok, and like in real life, her goal is to keep you on your toes until the end of each story.

Did you ever see a dream walking?

Wow sounds good, this is a great sounding read, this is on my list now for sure. thank you

Sounds like a hot read. I am anxious to learn more about Nadia.