Sands of Time (The Heart Falls Heroes #2) by K.D. Friedrich

Sands of Time is a contemporary romance set in a small Upstate New York town called Heart Falls, a town where heroes are born and passion is bred. This spicy romance tests the boundaries of trust, forgiveness, strength, passion, and most of all…love. 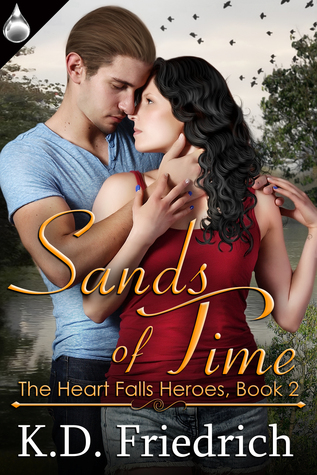 Sands of Time is a contemporary romance set in a small Upstate New York town called Heart Falls, a town where heroes are born and passion is bred. This spicy romance tests the boundaries of trust, forgiveness, strength, passion, and most of all…love.

Once again, single mom Jade Santiago is trapped under her father’s firm hand. If her existence wasn’t complicated enough, her son’s father, John Sands, has popped back into her life. John doesn’t know JT is his son, and Jade plans to keep it that way. John’s ignorance ensures his protection from her abusive, vindictive father. Especially now that John works for him.

Bad-boy-turned-cop John Sands loves women, but hates relationships. At least, that was, until Jade Santiago came back to town. Now he wants things. Things like family and commitment. Not to mention hot sex. For her, he’s ready to change his priorities. If he can only get past her stubborn indifference and the chief of police, who happens to be her father and his boss, she’ll end up right where she belongs—in his arms and his bed

Keeping JT’s dad a secret for all these years seemed like a good idea, but the more John proves himself a genuine friend and an honorable man, the more Jade struggles with her intense attraction and undeniable guilt. He deserves the truth. A truth that will ultimately destroy all she has worked to protect. A truth that will shatter the trust of the only man she has ever loved. A truth that will change their lives forever.

Dressed from head to toe in Yankee pinstripes, his tight pants emphasized his thick thighs, fine butt, and significant frontal attributes. His hat hung to the left side, reflecting his easygoing attitude and sexy cuteness she found so freaking irresistible. He even wore cleats to finish the look.

One glance at him in that uniform made her want to pass first, hit second, round third, and slide straight home into his waiting arms. Batter up, girl.

She passed a nervous giggle at her internal euphemisms. The smile fell when she remembered how angry and hurt John had appeared at the sight of Andy’s attention. Interest she hadn’t asked for. Sure, Andy was a nice guy. Not bad looking either, with his dark eyes and easy smile, but he didn’t make her tingle or draw her gaze south like a certain sexy cop. The reason she accepted his interest was to humor Cara. That woman had been trying all night to set her up with someone, first with Stan and then Andy. They weren’t the only three victims. The pregnancy had forced Cara into a serious nesting mode, making every single person run for cover. Even Cat, Pete’s cousin she had met earlier, became a casualty to Cara’s matchmaking escapades.

A sudden knock on the bathroom door made her jump.

K. D. Friedrich is a writer of Contemporary and Paranormal Romance. A graduate of NYIT, she earned a BS in Interdisciplinary Studies with concentrations in art, social science, psychology, and business. The culprit of that odd mixture was a severe case of indecision. She's an overprotective mother (her daughter's words), lifelong New Yorker, and an obsessed reader of everything romance. Most days, you can find her hard at work, creating intricate worlds and compelling characters, hot alpha heroes being her favorite. In 2013, her novel Soul Tie Seduction, placed second in the Golden Palm contest for Paranormal Romance.