She’d been hunted, stalked, and forced to keep a secret no one should have to live with. I’d made her a promise. Her freedom, my rules, no questions asked. I thought I’d kept my promise but I made a mistake—a rookie mistake. 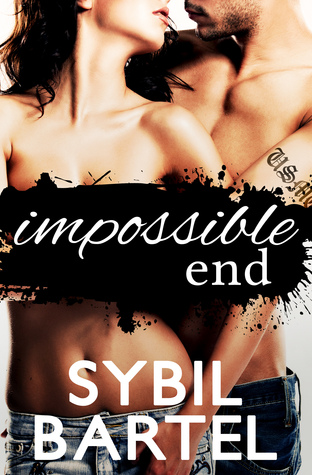 I stood by my brothers in the Marines and fought for my country. I gave my blood, sweat and flesh so that others could have a taste of freedom.

But my wife wasn’t free.

She’d been hunted, stalked, and forced to keep a secret no one should have to live with. I’d made her a promise. Her freedom, my rules, no questions asked. I thought I’d kept my promise but I made a mistake—a rookie mistake.

Now I was going to finish what I started. I was done playing games with the killer who’d murdered my wife’s parents and tracked her for sport. If he thought he was safe in a jail cell, he was wrong. No one puts out a hit on my wife and survives.

This ends now. I protect what’s mine…at whatever cost.

IMPOSSIBLE END is the conclusion to the Unchecked Series. This novella is from Blaze’s point of view and is not a stand alone. To get the full story, please read the first two books in the series, IMPOSSIBLE PROMISE and IMPOSSIBLE CHOICE.

The chick with the multi-colored hair was giving me the eye. And the creeps. But mostly the eye. I knew that look. That was the look of a nervous but desperate woman who wanted sex.

I didn’t play that game.

I was here because Darla called me and said that I should come. I didn’t play in the concert, but I came tonight to watch and because Darla asked me to join the engagement party. Sam was a cool guy. Amy was the kind of girl who looked down on me for the three years I was in high school, but she wasn’t like that to me. She was just that kind. The kind of chick who thought she understood anything about the world she could put into a neat little box.

Eventually they learned. I guessed. I guessed they learned that the world doesn’t work that way. I didn’t know any women like that up close, so all I could do was guess.

“Hey, Maggie!” Darla called out, walking over to her with two plastic cups of Champagne. Maggie. That’s right. I sucked at names.

I didn’t suck at faces. She’d stuck in my mind since the first time we met. She was carrying a blow up sex toy doll that day.

You didn’t forget that kind of thing.

Long, dyed hair. Three or four colors. She had eyes that were so fucking blue they must have been painted on. Fake lenses. A ton of piercings and a nasty scar up one cheekbone. That made me pause. What the hell happened to her? You don’t get that kind of mark from living a pampered life like most of the people at this party.

Maybe I misjudged her.

I didn’t fuck chicks who came on to me like I was something you try on, like a dress at a store in the mall you thought it would be fun to slip into for a minute. A disguise. A distraction. I’d been offered plenty of tester pussy. Like getting spritzed at the perfume counter at the mall—here’s a sample. Check out my scent.

They liked to get their turn on the bad-boy inked-up dude ride. And then they went home to their perfect houses in the suburbs, where Mommy and Daddy paid for everything and expected them to live cookie-cutter lives.

Been there, done that, had the memories of uncomfortable looks when I asked for a second date burned into my brain like a brand.

I was the guy you fucked so you could tell your friends you had a bad boy.

I wasn’t the guy you brought home for dinner.

Maggie, though...that scar. The hair that looked like something out of a My Little Pony commercial. All those studs in her nose and ears. Women who made themselves look like that did it to filter out the world.

“How’s it going?” she asked. Darla handed me a beer and walked away, a satisfied smile on her face. I had a hard time with words but not with facial expressions. More than one woman here wanted to see me with Maggie. I felt like a gazelle being watched by a pack of lions on one of those nature shows my dad left on after he passed out from his nightly twelve pack. The gazelle at the watering hole during a drought, being looked over by the pack of hungry lions.

Cougar, actually. Maggie’s a good five years older than me.

“Good.” I drank my beer in one long motion, trying not to choke. Her eyes raked over my arm as I lifted it, widening, then going back to normal. Whatever normal meant.

Leave. My internal warning system told me to get the fuck out of here. Do not engage. Do not touch. She was Charlotte’s best friend and you don’t taint the waters when your only paid gigs come from this chick’s best friend’s boyfriend’s band.

I was normally damn good at listening to my inner warning system.

It was hard to listen through that much color.

Her hand landed on my bare arm, two fingers pressing with a feather-light touch against one of my tats. The brush of her fingers made my thighs clench, my throat tighten, and my heart speed up double, as time itself slowed down.

“What’s that?” She gave me a smile so bright it lit up half the world, her eyes guarded but clear. So clear.

She poked hard with those fingers and nudged me. Making excuses to touch me. My body responded, too. Of course it did. The very small number of words my brain could hold at the same time became even smaller. She smelled like soap and sweat, like sweet wine and kisses.

I couldn’t sleep with her.

Her finger traced a slow line on the border of my tat, following the labyrinth pattern with a kind of aimless wandering. She was using any excuse she could find to touch me and to keep touching me. I looked at her face, her eyes tipped down, her upper lip tucked between her teeth as she tried to breathe nice and steady.

Her pulse fluttered on her neck. She swallowed every few seconds. I narrowed my eyes and really took a good look.

This wasn’t a bad boy fuck pass. She wasn’t slumming. If it had just been that I’d have doubled up on my no.

Damn it, she had something way deeper going on.

About the author: Sybil Bartel grew up in Northern California with her head in a book and her feet in the sand. She dreamt of becoming a painter but the heady scent of libraries with their shelves full of books drew her into the world of storytelling. She loves the New Adult genre, but any story about a love so desperately wrong and impossibly beautiful makes her swoon.

Sybil now resides in Southern Florida and while she doesn’t get to read as much as she likes, she still buries her toes in the sand. If she isn’t writing or fighting to contain the banana plantation in her backyard, you can find her spending time with her handsomely tattooed husband, her brilliantly practical son and a mischievous miniature boxer…

Here are ten things you probably really want to know about Sybil.

She grew up a faculty brat. She can swear like a sailor. She loves men in uniform. She hates being told what to do. She can do your taxes (but don’t ask). The Bird Market in Hong Kong freaks her out. Her favorite word is desperate…or dirty, or both—she can’t decide. She has a thing for muscle cars. But never reply on her for driving directions, ever. And she has a new book boyfriend every week—don’t tell her husband.

Great Series!! Thanks for the giveaway!

Great excerpt, thanks for the giveaway!

It's "impossible" not to love the covers :) Given that, I want to read this series! :)