18+ The voices stopped suddenly and Piper went still, cocking her head to try and figure out where the men had gone off to. The library was massive. They could be anywhere.
“Spotted her first, boys. I win,” a deep, rolling voice said from directly behind her. 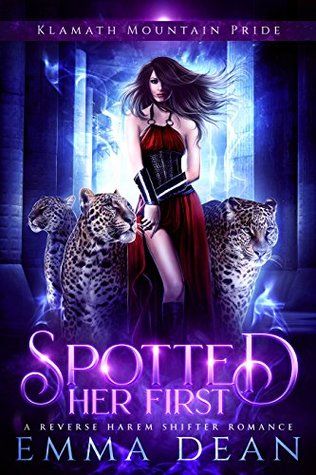 Piper is a librarian at Sacramento State working on her graduate thesis, but her quiet life turns upside down when three hot guys literally crash into her world. They move into her house and her life, telling her she’s wanted by a demon and a witch for her pharaoh’s blood. She just didn’t realize how much they would take over her life in the name of protecting her.

Piper is overwhelmed by the paranormal world and everything in it, including the fact that somehow all three of these guys are her mates. She has two weeks to find a way out of a demon contract and figure out how she’s going to deal with all three of these domineering shifters in her life and in her apartment. Will Piper be able to save herself and the pride she’s grown attached to before it’s too late?

The doors to the library swung wide open and Piper jumped at the sudden sound. She checked her watch with a frown. No one came in this late to the library on a Friday night.
“Are you sure this is the right place?” someone asked. He sounded…like velvet and brandy.
It was the stupidest thought Piper had ever had in her life and she’d certainly had some doozies. But there was no better way to describe the soft male voice that seemed to drift through her library like smoke.
“The witch said it was,” another man said. These voices were definitely not the boys she was used to. They were deep, gruff, and somehow sensual.
Piper frowned at the word ‘witch.’ Moving silently through the stacks Piper positioned herself so she could see who was in her library so late at night.
“I’m going to find her first,” one taunted.
“Oh no you aren’t, I am.”
“You’re mistaken if you think either of you are faster than me.”
What the heck were they talking about? Whatever it was she didn’t like the sound of it. Either they were searching for one of the students…or her. Neither sounded very safe. Piper cursed herself for being so far from her desk and the taser she kept in her purse.
Slowly she moved deeper into the shadowy stacks, keeping to the back. She just wanted to get out of the library without any confrontation. She didn’t know what these guys had planned, but she wasn’t stupid enough to wait and find out.
At least there were multiple exits. Piper pulled her phone out of her pocket and made sure it was on silent. She could text security but her dad would be there faster. She sent off a quick text and asked him to come to the library. It was difficult to ask him to come pick her up early without setting off his panic. But his patrol was in her area. It was the safest way.
Piper may not have anything on her person to defend herself with, but her dad had always said anything could be a weapon. She grabbed the heaviest book she could find in hardback. It wouldn’t do much but it would disorient an attacker.
So many years of self-defense classes and days at the gun range that she’d absolutely hated. Her father had insisted. Piper had never been so grateful for Dad’s bullheaded insistence in her life.
The voices stopped suddenly and Piper went still, cocking her head to try and figure out where the men had gone off to. The library was massive. They could be anywhere.
“Spotted her first, boys. I win,” a deep, rolling voice said from directly behind her.
Piper gasped and whirled around. The man before her was definitely like no one she’d ever seen before. Well, not in real life. He looked like he should be a model with his jade-green eyes and tanned skin. His blond-brown hair was thick and gorgeous, but it was his presence that had her captivated.
Then her senses came back to her. Piper hurled the book at his face as hard as she could and let out a little screech.
Goodreads ** Amazon

About the author:
Emma Dean lives and works in California with her husband and son. She loves romance but needed something different so Draga Court was born. With too many stories to write the schedule has been filled through 2018.

When she’s not writing she’s reading, or spending time with her family.
With publishing now at least she has an excuse for not folding the laundry ;)

Goodreads
Author's Giveaway
a Rafflecopter giveaway
Posted by CCAM at 10:00 AM

Love the cover ( especially since my favorite color is violet purple) but the blurb really reeled me in. Three panther shifters, a witch with pharaohs blood, and all three finding a perfect mate whom they need to protect from Damon's. This sounds like a perfect beginning for what sounds like a roaring good reverse harem. I have to read this one!!!!!! Pretty please with sprinkles on top!🙌😳🙌😀😇😉

This sounds so good! I love the cover also!