"FLORIDA. IT'S WHERE YOU GO TO DIE." - Jurassic, Florida by Hunter Shea 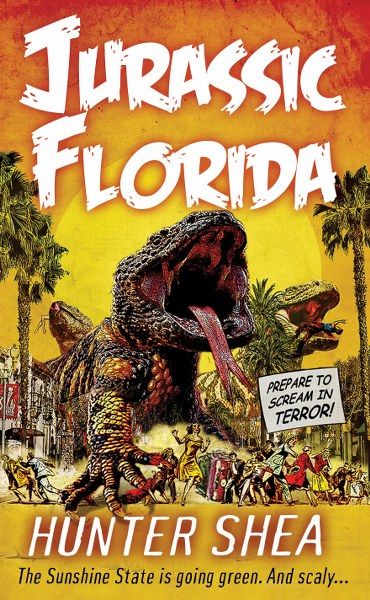 Florida. It’s Where You Go To Die.

Welcome to Polo Springs, a sleepy little town on Florida’s Gulf Coast. It’s a great place to live—if you don’t mind the hurricanes. Or the flooding. Or the unusual wildlife . . .

Maybe it’s the weather. But the whole town is overrun with the little green bastards this year. They’re causing a lot of damage. They’re eating everything in sight. And they’re just the babies . . .

The mayor wants to address the iguana problem. But when Hurricane Ramona slams the coast, the town has a bigger problem on their hands. Bigger iguanas. Bigger than a double-wide. Unleashed by the storm, this razor-toothed horde of prehistoric predators rises up from the depths—and descends on the town like retirees at an early bird special. Except humans are on the menu. And it’s all you can eat . . .

"Overall, JURASSIC, FLORIDA delivers with continuous pulse-pounding action, a "different" form of threat to humanity, and some memorable characters. The only thing I deducted for that I felt cold have been more comprehensive, was the ultimate ending. After all of the build up, it felt somewhat rushed and I, personally, would have liked a more elaborate conclusion." Kimberly, Goodreads

They fed Tony to an alligator!

Frank Ferrante woke up in a cold sweat, heart galloping to break free from his rib cage. His mouth was gritty with sand, the sour taste of thick morning breath compounded by the fact that he hadn’t brushed his teeth in two weeks.
He rubbed his sunburnt lids with filthy knuckles. The image of Tony, screaming like he’d never imagined a man could scream, the alligator clamped on his leg like a vise, refused to dissipate like the ghost of a dream.
Because it wasn’t a dream.
The crying gulls overhead were drowned out by Tony’s pleading cries within his head.
The sun stabbed his face when he sat up, the Gulf of Mexico surf creeping toward his hiding space in the tall beach grass. He spat into the sand, the yellow gob of mucous quickly absorbed.
“You’re safe. You’re safe,” he muttered, hoping if he said out loud enough, he’d eventually believe it. So far, it wasn’t working. What he did know was that he was safe for the moment. That didn’t mean his ultimate fear wasn’t standing right behind him, waiting to ruin the next moment.
An old couple walked along the surf, gray hair standing on end against the breeze. A guy wearing nothing but a nut hugger and headphones jogged past them, his body glistening with sweat or sea spray. Frank really didn’t care which.
Every joint and muscle in Frank’s body hurt. He was used to sleeping on one of those sleep-number beds, not within itchy beach grass, alleys and dark stairwells. He was sore and tired and hungry and scared. He wondered how long his heart could hold out, always on the brink of disaster and misery like this. He was young, only thirty-two, but he’d aged at least fifty years over the past couple of weeks.
Shit, being forced to watch what they did to Tony had taken him right to the front of the old codger line.
“What the hell?”
Something tickled his back. He reached an arm to pull what must have been grass out of his shirt. His shoulder popped, ripples of pain shooting down to his fingertips. The pad of his index finger touched something long and hard. It moved up his back. More like scampered.
Frank yelped, the old couple pausing in their morning walk to see him pop out of the reeds like an overexcited meerkat.
Something was in his shirt, clawing its way up and down his back. He went into an impromptu St. Vitus dance, clawing at the dirty rag he called a shirt. Now there was something in his front and back!
He stepped on his own foot, toppling backward. He heard and felt whatever was in his shirt give a soft pop. A sticky wetness oozed down his spine. Tearing his shirt open, the buttons popping free, a sleek green shape leapt off his scarred belly and tore ass along the beach.
Goddamn lizard.
Which meant the thing that had exploded on his back was one, too.
Disgusted, but not as much as he would have been weeks ago, he slipped his shirt off and inspected the Turin-like stain that was in the vague shape of a lizard. He scooped the sticky remains off his back, flicking it onto the sand but refusing to look.
Still in his clothes, he walked into the warm waters of the Gulf, washing the remains from his flesh.
There were more goddamn lizards in this poor excuse for a Florida town than squirrels in all of New York. He’d gotten used to them flitting over him while he slept. But this . . . this was an intrusion that would not stand. He was glad he’d crushed the one, pissed he’d let the other get away.
After a thorough soak, Frank left the beach, wet shoe prints in the sand. He needed to find food and something to drink. Worsening dehydration was making his heart beat all kinds of funky. He should be home in Ozone Park right now, having a hot cappuccino, huevos rancheros and a side of home fries at the North Avenue Diner.
Frank choked back tears at thinking he could never go back there again. That life was as good and done as Tony’s.

About the author:
Hunter Shea is the product of a misspent childhood watching scary movies, reading forbidden books and wishing Bigfoot would walk past his house. He’s the author of over 17 books, including The Jersey Devil (Pinnacle 2016)), Tortures of the Damned (Pinnacle 2015), and We Are Always Watching (Sinister Grin). Hunter’s novels can even be found on display at the International Cryptozoology Museum. The Montauk Monster (Pinnacle 2014) was named one of the best reads of the summer by Publishers Weekly. He was selected to be part of the launch of Samhain Publishing’s new horror line in 2011 alongside legendary author Ramsey Campbell. His video podcast, Monster Men, is one of the most watched horror podcasts in the world. Living with his crazy and supportive family and two cats, he’s happy to be close enough to New York City to see the skyline without having to pay New York rent.

Great cover, reminds me of a 1950's monster movie

"FLORIDA. IT'S WHERE YOU GO TO DIE." - a very suggestive and welcoming recommendation to read this book :))

Way to go on the cover design!!