the voice of the resistance... The Big Bang (Lonesome George Chronicles #1) by Roy M. Griffis

Sobering and thought provoking tale of the possible future of Western Civilization. Compelling!
Not much wakes me in the middle of the night . . .
Perfect read for a (non-nuclear winter) snow day! 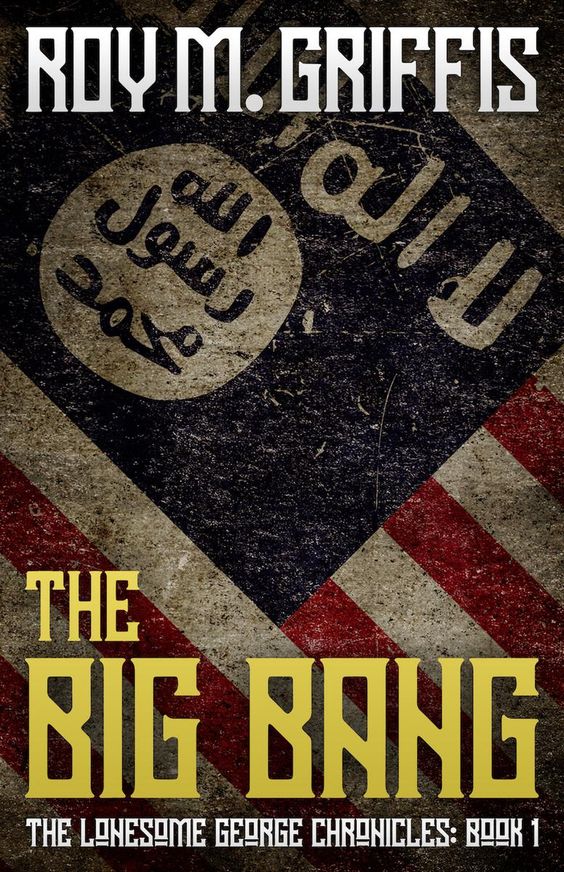 In this page-turning post-apocalyptic thriller, Roy M. Griffis explores an alternate timeline in which America falls victim to a coordinated attack by Islamic jihadists and Chinese Communists. It’s 2008 and George W. Bush is still president. Three years later, the man called “Lonesome George” is in hiding, leading the resistance from a secret location.

Multiple plot lines skillfully braid the tales of resistance fighters in various parts of the country. Whistler is the hard-bitten commander of a military unit in Texas. Karen, a former congressional aide, stumbles through the radioactive rubble of Washington DC. Molly, a leftwing columnist in San Francisco, finally puts her talents to good use on the underground radio as the voice of the resistance. Alec, a famous Hollywood actor, loses his wife and daughter in the nuclear attack on Los Angeles and becomes a legendary fighter, inventing the gun that bears his name.

A vivid imagining of an America gone horribly wrong, written in gripping detail.

On August 23, millions of people awoke to a new world. Whether it was brave or not, only time would tell. But it was certainly different. And for nearly a third of the people alive that morning, it would also be their final day on the planet.

The President and his cabinet had been evacuated to Bunker 7 in the Alleghenies. Cheyenne Mountain had been closed the year before. As secrets went, the mountain’s location and purpose were as shrouded in mystery as Rock Hudson’s private inclinations. Bunker 7 was reached by a one-hundred-and-twenty-five-mile maglev train ride over two hundred feet underground. The entire bunker complex had been burned out of the mountain from beneath to reduce any impact on the structural stability of the solid granite. Power was provided by a small nuclear reactor that was based on a Navy submarine design. Much of the layout of Bunker 7 reflected training and operational insight gained from the Navy. After all, if the government came to Bunker 7, it was likely they might not see the light of day for many long weeks. Why not use the experience of those who had already been through that kind of life?

Bunker 7 had the latest in communications, remote control, and protection against many an attack. What it didn’t have was Laura. She was visiting with an elderly aunt in New Braunfuels, Texas. The President sent a detachment of Special Ops forces to protect his wife and return her to the Bunker safely.

That decision made, the President could turn his attention to the attacks on the nation. It was clear nuclear devices had gone off in a number of major cities across the United States. “Los Angeles, San Francisco, Portland, Seattle, Dallas, Kansas City, Omaha, Washington.” The list was growing as reports came in from around the country.

Israel, God bless ’em, had come through. As far as Bunker 7 could tell, Israel was on full alert. They’d offered sanctuary to any US soldiers who could make it to their borders. American troops throughout the Arab world were under attack by various jihadist factions, but these actions appeared more opportunistic than rigorously planned, as had been the assault on America. Apparently, the attackers reasoned that with the Great Satan staggered by the attacks and Allah on their side, they would be able to overwhelm the grunts and the jarheads on their own. So far, this reasoning had proven false. The Marines and the Army were holding their own, their weapons and electronics not affected by the EMF pulses that had battered North America. A lot of martyrs were being sent to Paradise, with their ticket being punched courtesy of the United States military.

There was worse news to come. The Chinese decided to enter the war.

About the author:
Born in Texas City, TX, the son of a career Air Force meteorologist. Attended a variety of schools at all of the hot spots of the nation, such as Abilene, Texas and Bellevue, Nebraska.

Sent to my grandparent’s house in Tuscon, Arizona when things were tough at home. I was pretty damn lost, as my grandparents were largely strangers to me. My older brother, a more taciturn type, refused to discuss what was going on. Fortunately, like so many kids before me, I was rescued by literature. Or, at least, by fiction. In a tiny used bookstore that was just one block up from a dirt road, I discovered that some good soul had unloaded his entire collection of Edgar Rice Burroughs’ “John Carter of Mars” series in Ballantine Paperback. Moved by some impulse, I spent my RC Cola money on the first book, “A Princess of Mars.”

I think what struck me was how these books were possessed of magic: they were able to transport me far from this dusty land of relatives who I didn’t know and relatives pretended not to know me to another dusty land of adventure, heroism, nobility, and even love. It was the first magic I’d encountered that wasn’t a patent fraud, and when I closed the stiff paperback with the lurid images on the cover, I decided it was the kind of magic I wanted to dedicate the rest of my life to mastering. And, thus, I was saved.

Since then, I’ve never looked back. I’ve written poems, short stories (twice runner-up in the Playboy college fiction contest), plays (winning some regional awards back East and a collegiate Historical Play-writing Award), and screenplays. I’m a member of the WGAw, with one unproduced screenplay sold to Fox Television.

Along the way, I’ve done the usual starving artist jobs. Been a janitor, a waiter, a clerk in a bookstore. I was the 61st Aviation Rescue Swimmer in the Coast Guard (all that Tarzan reading wasn’t wasted). I’m also not a bad cook, come to think of it.

Currently, I’m a husband, father, and cat-owner. I’m an avid bicyclist and former EMT. I live in Southern California with my lovely wife. My friends call me “Griff,” my parents call me “Roy,” and my college-age son calls me “Dadman.” It’s a good life.

Thanks for hosting this great, fun tour and letting us find out about terrific books to read. Thanks also for the great giveaway.

the alternate timeline stories are good as an exercise for finding out "what if" and maybe to realize better what we have to lose...

The premise of this book is very intriguing. Good luck on the rest of tour! :)