WARNING: Substance may be addicting and cause sleeplessness. If you start this novel, you may not want to put it down!
Lead, follow or get out of the way, but BUY THIS BOOK.
A Fast, Exciting Ride 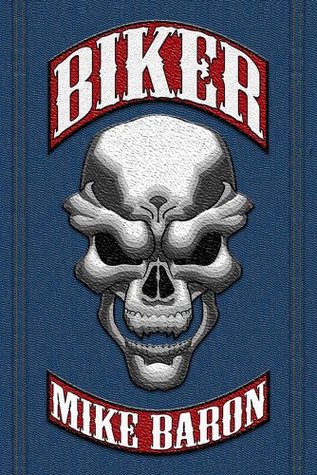 Josh is the BIKER, caught up in a race for survival against a human monster on the road between heaven and hell at the end of which lies either salvation or damnation. Baron spins a tale of unrelenting suspense and horror that moves across his narrative landscape like the roar of a chopper’s engine. Creating memorable characters and authentic backgrounds, this is an amazing, quality crime thriller unlike anything you’ve ever read before. The man who shook up the comic industry with his revolutionary stories now turns his limitless skill and imagination to the world of crime fiction and the result will blow you away.

“I DON’T THINK SO MOTHERFUCKER.” The Mastodon advanced, eyes blazing with incendiary rage and joy.

“Kick his ass, Barnett!” someone called.
“Beat down!”

Bending like a sprinter Pratt ran straight at the big man, swerving and ducking at the last minute as he whacked Barnett’s left knee with the ax handle with the satisfying smack of Barry Bonds knocking one out of the park. Barnett sank like the Twin Towers. Two Mastodons calved like icebergs from the crowd, one swinging a chain, the other gripping a Bowie knife the size of Rhode Island. Pratt stepped backwards onto Barnett’s head, grinding it into the dirt.

The Mastodons split, the one on Pratt’s right grinning as he swung the chain in a figure eight. They planned to catch Pratt between them. Pratt danced backward to the van, flung the door open and grabbed a two-pound steel wrench. The chain guy rushed and lashed out, bringing the heavy chain down in a vertical arc meant to bash Pratt’s skull. Pratt juked to the right and threw the wrench ass over teakettle with as much spin as his thick wrist could deliver.

The chain guy’s mouth went oval an instant before the wrench struck him in the middle of his forehead with the jawed end. The chain guy staggered back two steps and sat heavily on his ass.

Barnett sat up clutching his knee. “Shit!” he spat. “What’s the matter with you assholes? Fuck him up!”

The other Mastodon danced forward, knife moving in a tight little pattern. The freak was between Pratt and the van so Pratt did something he’d seen in a Punisher comic book. He scooped up a handful of pea gravel and hurled it in the knife man’s face. The dude instinctively threw up his hands. Pratt rushed in with a kick to the nuts that lifted the hapless Mastodon off his feet. He fell to the ground howling and curled up like a shrimp.

An anaconda-like arm snaked around Pratt’s neck. He grabbed hold of the elbow with both hands to work a little breathing room but by then a couple more Mastodons had moved in to deliver kidney-rupturing body blows. Pratt kicked up and caught someone in the jaw.

An instant later he was driven to the ground by the sheer force of blows. Now it was his turn to curl like a shrimp as bikers went to work with steel-toed boots. Pratt couldn’t see daylight. He tried to shield his head and gut as blows rained down like a meteor shower. Bone-deep pain churned through his ribs. Pratt had a very high pain threshold. He was near red line. A wooden bat bounced off his ribs with soul-stopping force and he began to wonder if he was going to make it out of there alive. A slick nausea ballooned from his broken nose and worked its way to his stomach.

All for two dogs.

The smack-in-the-face report of a shotgun instantly sucked the air out of the yard. Heads swiveled. “Back away from him. Get back or I’ll blow your fuckin’ heads off,” a woman said. Pratt incongruously registered her sexy contralto and wondered if her looks matched her voice. Gradually, grudgingly, the bikers backed off. One last kick to the kidney from Taco who held the bat.

I’ll be pissing blood for a week, Pratt thought.

Slowly, painfully, he got to his feet. Cracked rib. Jolts of pain radiated through his thorax like starving cats released form a cage. Loose jaw and lumps and abrasions up and down both sides. He turned toward the shooter. She stood atop the three stone steps leading to the farmhouse holding a pump-action Remington in parade position. His first impression: That body. Latino voluptuous. Huh! Good God!

“He’s a fuckin’ cop, Cass!” Barnett said, hanging onto a brother.
“I’m a private investigator,” Pratt said. “All I want is the dogs.”

About the author:
Mike Baron is the author of Helmet Head, Whack Job, Biker and Skorpio, four mind blowing novels that will change the way you feel about horror fiction. In 2018, Liberty Island will release six Josh Pratt novels in The Bad Road Rising series. Josh Pratt is a reformed motorcycle hoodlum who found God in Jail, got out, and became a private investigator. The stories are bleak, brutal, and harrowing, and often very funny.

Mike Baron broke into comics with Nexus, his groundbreaking science fiction title co-created with illustrator Steve Rude. He has written for Creem, The Boston Globe, Isthmus, AARP Magazine, Oui, Madison, Fusion, Poudre Magazine, Argosy and many others. Nexus is currently being published in hardcover by Dark Horse. Baron has won two Eisners and an Inkpot for his work on Nexus, now being published in five languages including French, Italian, Portuguese, and Spanish.

Thanks for hosting this great, fun tour and letting us find out about terrific books to read. Thanks also for the great giveaway.

I love your cover.

Great cover--I liked the warning too

already bought it; I cannot wait for the author's "limitless skill and imagination" to "blow me away" :P that is quite a promise!

I love the cover for this. Very cool! Good luck for the rest of the tour! :)

It is a good looking cover. Perhaps, original and unique.