They could have a love that eclipses everything - Galaxies and Oceans by N.R. Walker

"This book is amazing, beautiful, romantic without being too sweet or too angsty. Another winner from my favorite author. And I can't wait for her next 'surprises' in the near future. I can't recommend this book enough for everyone to read this, and experience the beauty of galaxies and the oceans." - Lelyana, Goodreads 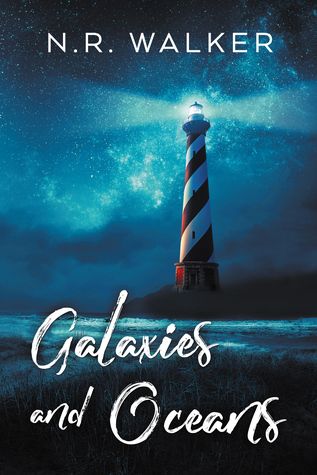 Seizing his one chance to escape, Ethan Hosking leaves his violent ex-boyfriend, leaves his entire life, and walks into the path of a raging bushfire. Desperate to start over, a new man named Aubrey Hobbs walks out of the fire-ravaged forest, alive and alone. With no ID and no money, nothing but his grandfather’s telescope, he goes where the Southern Cross leads him.

Patrick Carney is the resident lighthouse keeper in Hadley Cove, a small town on the remote Kangaroo Island off the coast of South Australia. After the tragic death of his lover four years ago, he lives a solitary life; just him, a tabby cat, the Indian and Southern Oceans, and a whole lot of loneliness. He’s content with his life until a stranger shows up in town and turns Patrick’s head.

Patrick never expected to be interested in anyone else.

Aubrey never expected to be happy.

Between Aubrey’s love of the stars and Patrick’s love of the ocean, these two fragile hearts must navigate new waters. If they can weather the storm of their pasts, they could very well have a love that eclipses everything.

What the hell was I doing?

Why was I offering him parts of myself that weren’t mine to give?

And what the hell was it about this Aubrey Hobbs that upended my comfortably numb life?
I wasn’t prepared to feel anything again. I wasn’t supposed to. When hearts are broken so utterly beyond repair, they’re not supposed to beat again, right? And that scared the hell out of me.
I dropped him home, and there was a moment before he opened the door, that will-he, won’t-he say something or do something moment. And I didn’t know if I was more grateful or disappointed that he did neither. He simply held my gaze for a long moment before thanking me and getting out of the car.
I don’t think I breathed until I got home.

I finished cleaning the kitchen, fixed the fire, and found Tabby on the sofa. “Well, you were a surprise,” I said to her, giving her a pat. “What are you trying to tell me, huh?”

Of course, she didn’t answer. She just purred a little louder and closed her eyes. Maybe that was my answer. But I couldn’t believe it when she’d jumped up on him. Tabby had been Scott’s cat. She’d adored him, followed him everywhere, and had—without one iota of shame or care—made her preference for him over me very well known.

After Scott… well, she wouldn’t come near me for the longest time. She only tolerated me because I fed her. She’d sit across the room, or under the table, or in the hall, and look at me as though she blamed me because her Scott was gone.
Well, my Scott was gone too.

I walked over to the photo of him, and my heart squeezed again. This time for a whole slew of other reasons. Loss, grief, and now guilt.

“I don’t know what I’m doing,” I said to him.
I could almost hear him laugh and say, “You’re navigating unchartered waters, Patrick.”
I blinked back tears. “I don’t know how,” I replied.
And the answer was as clear as a bell.

By following the stars.
I gasped back a breath. “Oh God. Aubrey.”
Scott’s eternally-smiling face smiled now as if I’d finally clued into what he’d known all along. I could just imagine him shaking his head at me, laughing. Trust the waters, Patrick. The ocean was mapped out from the stars.

About the author:
N.R. Walker is an Australian author, who loves her genre of gay romance. She loves writing and spends far too much time doing it, but wouldn't have it any other way.

She is many things; a mother, a wife, a sister, a writer. She has pretty, pretty boys who live in her head, who don't let her sleep at night unless she gives them life with words.

She likes it when they do dirty, dirty things...but likes it even more when they fall in love.

She used to think having people in her head talking to her was weird, until one day she happened across other writers who told her it was normal.

She's been writing ever since...

Fantastic synopsis and excerpt! This sounds like a wonderful read and I'm looking forward to it.

Sounds like a delicious book. I too am Australian and love it that you've set it there.

The name and cover are adorable. I love lighthouses, symbol of hope in turmoil.
Maranda H.