Before she can celebrate the good news... The Kate Roark Magic Series Laura Rich

"A very fun read with its own twists and turns, Indira is her usual supportive best friend but will she be able to maintain this friendship in the light of what she discovers about Kate and her family in relation to her own dead family? So much going on, makes us want to read book 3 asap! " Lana, Goodreads 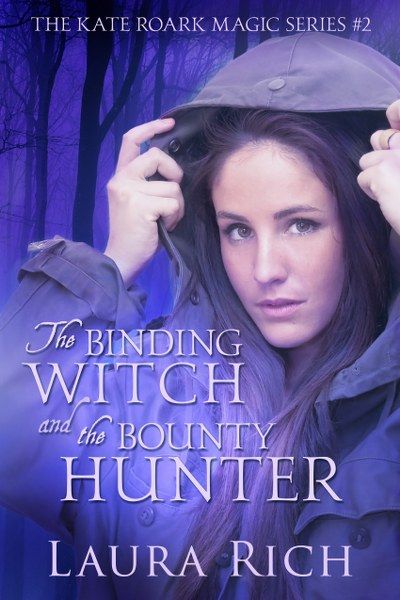 The Binding Witch and the Bounty Hunter #2

Kate thought she’d never unlock her powers—let alone trigger them by creating a familiar out of a cross-eyed pigeon.

Before she can celebrate the good news, a terrifying bounty hunter kidnaps her mother. In a race against time to save her mother, Kate runs afoul of a dragon, and even worse, the most feared creatures in existence—the dreaded forest gnomes. To top it all off, she discovers long-lost magical family members who maybe should have stayed lost. Kate is finally a witch—but it just might kill her.

If you like Buffy the Vampire Slayer, Veronica Mars and iZombie, you’ll be rooting for this strong, snarky teen girl on every page.

The Binding Witch and the Fortune Taker #1

The Binding Witch and the Fortune Taker is the first in a series and a 17,500 word novelette.

Growing up homeschooled on the Renaissance Festival circuit is weird enough, but when you're the daughter of a powerful binding witch who makes a living as a fortune teller, and your best friend is a middle-aged sari vendor, weird is relative.

Fifteen-year-old Kate Roark desperately wants to be a witch but isn't - yet. It's not likely at her age until she meets the Fortune Taker and gets a taste of unimaginable power - but at what cost?

Forced to choose between keeping stolen power or making her magic dreams come true, her ultimate decision throws her entire world into question.

Described as "book candy", and "compulsively readable," The Binding with and the Fortune Taker is the first in the Kate Roark Magic Series from emerging YA fantasy writer, Laura Rich.

The bird struggled, pushed to her feet, ruffled her blood-caked feathers, and cooed.

I smiled, though she still looked gruesome. I wondered if she would let me clean her off. She stood perfectly still, and we stared at each other. The whites of her eyes were actually gray flecked with gold, and she had black pupils of surprising depth.

As I continued to hold her gaze, waves of information flowed towards me. Flashes of Gringo’s attack, the quest for food, the feeling of a mashed-up worm in my mouth, and flight. Glorious flight. The only experience I could compare it to was sticking my head out of the window of a moving car, but this was so much more wild and uncontrolled. Dipping, gliding, climbing, soaring, banking, communicating to other birds using the way my—her—body moved. It was exhilarating—and terrifying.

It was then that I realized why my mother used feathers in change magic. This was exactly what change felt like.

Once that idea hatched, I wanted to make sure I didn’t forget it. I wanted to lock it away in a vessel to be visited later. Immediately a shape formed in my mind to contain it: an orb of moonlit reeds that contrasted light and darkness. The idea of change slid eagerly into the orb and filled its roundness. The weave rearranged itself to seal off the ends, and a brilliant light lit up the whole room. I yelped and collapsed on the table, unconscious.

“Are you all right?” The voice was young, female, loud, and close.

I jerked up with a gasp, drenched in sweat. “Who’s there?”

The white pigeon on the table brushed my cheek with her outstretched wing tip and tilted her head. The voice repeated directly in my mind, “I said, are you all right?”

About the author:
Laura Rich is an emerging author of young adult fantasy fiction about witches. She loves to read in a hammock with a glass of iced tea, bake cookies, garden and dress up for Halloween as (you guessed it) a witch. She lives in Texas with her family and works as full-time project manager. Magic may be involved in pulling all this off.

Author's Giveaway
a Rafflecopter giveaway
Posted by CCAM at 4:44 PM

I really enjoy these tours and all the terrific books I have been able to pick up along with my kids and sisters who love to read. Thanks for sharing with us, always great to find books my family enjoy reading. And thank you for the giveaway as well.

I liked the cover and the title

Where do you get the cover art from?

I like the book cover and the description of the story.