is it too late? - The Melded Child by Jane Routley

“This earth is rotten to the core and humanity is just a mass of maggots … And now I, Malov Symina, am going to become the biggest maggot of them all” 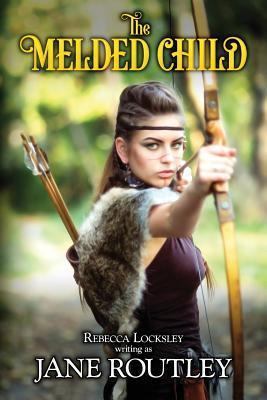 For ten years the peace negotiated by the Tari has held firm. But greedy eyes watch in the distance, coveting the peaceful lands of Yarmar and even the Tari themselves. A new demon master rises bringing pollution and violence. When Yani the Raven is kidnapped, sorceress Marigoth and her companion Ezratah are drawn to Armaya and a trap set by a brutal necromancer and his insane sister.

Meanwhile Elena Starchild’s daughter Alyx, heir to the throne of the Mori finds herself wounded and on the run in a forest full of dark magic. And in the company of a bitter Mirayan enemy.

Can the insular Tari dreaming in the secret land of Ermora be awoken before the demon fire consumes them? And can a Melded Child bring harmony in clasped hands before it is too late?

Duchess Jindabyne Madraga, whose memory of the time before she married the Duke has been destroyed by magic, has been captured by her mortal enemies, the forest-dwelling Mori. Their Hooded Queen demands an audience with her.

“Lady, if I wronged you, I humbly beg pardon,” cried Jindabyne. “Please forgive me. I was another person then.”

The Mori woman was at the Queen’s side, dragging on her arm talking to her urgently in Mori, a language that Jindabyne did not know. The queen let herself be pulled away for a moment. Then suddenly she swung back.

“Have you really forgotten me Jindabyne! I find that very hard to believe.”

She ripped the covering off her face.

Jindabyne gasped. Before her stood the most beautiful woman she had ever seen. Utterly, utterly, breathtakingly lovely. How could she have forgotten her!

As she stared in open mouthed amazement, the woman’s eyes widened and the glaring hatred on her face changed to bitter amusement.

“So! Marigoth was right,” she said, her mouth twisting wryly. “Or I am less memorable than I thought I was. Something to hope for.”

“Lady I am sorry,” said Jindabyne. “I always suspected that I did wrong in the past, but I am different now and willing to make amends.”

The savagery of the woman’s glare did not make her any less beautiful. For a moment Jindabyne thought she was going to leap on her again, but then she slumped back onto her seat.

“Take her away!” she said her voice heavy with disgust. “I cannot bear the sight of her.”

“Lady please!” cried Jindabyne, as the guards dragged her away. “If you wish revenge... Do not harm the others. They are innocent of any harm to you. Especially Olga. You are a mother yourself.”

About the author:
I write historical fantasy with feisty female characters and four of my books have been published Harper Collins, U.S. Two of them won the Aurealis award for Best Australian Fantasy in their year. The Dion Chronicles have now been reprinted in ebook format from Clan Destine Press and in paperback from Ticonderoga Publications. The Three Sisters and The Melded Child are now available from Clan Destine Press in Ebook and from Bernarra Press in hardcopy. .

I was born and live in Melbourne, Australia

I really enjoy these tours and all the terrific books I have been able to pick up along with my kids and sisters who love to read. Thanks for sharing with us, always great to find books my family enjoy reading. And thank you for the giveaway as well.

Looking forward to reading this book. Thank you

Thanks for hosting me Mythical Books.
Do Fantasy readers prefer more or less romance in their fantasy?
Any answers out there?

Thank you to Victoria, James Wendy and Linda for their comments

I'm looking forward to reading this!