can history be undone? Fast Backward by David Patneaude

"The Andrews Sisters reference was FANTASTIC! I love Boogie Woogie Bugle Boy. I have a crazy fondness for older music, so this reference probably made this ensure book 100x better for me." Briar, Goodreads 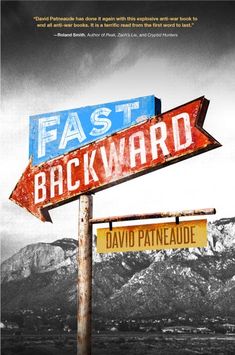 Fifteen-year-old Bobby Hastings witnesses an atomic explosion near a top secret New Mexico army base in July of 1945. Terrified, he soon heads off on his bike for home, only to encounter something that rivals the blast for drama. A girl his age stands naked at the side of the lonely desert road: underweight, unwell, and speaking with a German accent. In the coming days, she unveils an impossible story about time travel and a heartbreaking outcome of the war. She begs people to believe her warning and prevent the awful future she claims to know too well. But even if they do believe her, and the story is true, the biggest question remains: can history be undone?

"Fast Backward was one heck of a read. It was also quite refreshing. I’ve been reading about WWII from women’s perspectives in Paris for months, now I got to see a male perspective from the US. And it certainly did not disappoint.
The novel itself is an easy read and I really could not put it down. It started off a little slow, but once the action got started it really picked up. I was on the edge of my seat hoping that Bobby and Cocoa could alert the military to Hitler’s next move. " Brittany, Goodreads

About the author:
David Patneaude finally heeded the advice, "It's never too late to have a happy childhood," and began writing seriously (more or less) in the mid 1980's. His first novel, SOMEONE WAS WATCHING, winner of South Dakota and Utah book awards, was published in 1993. His books have been placed on young readers' lists in more than thirty states and honored by the New York Public Library (THE LAST MAN'S REWARD), the Society of School Librarians International (FRAMED IN FIRE), the Winnetka (Illinois) Public Library's "One Book, Two Villages" program (THIN WOOD WALLS), and the Washington State Public Library (THIN WOOD WALLS). His newest book, EPITAPH ROAD, was first published in March 2010. A revised digital edition was published in February 2017. Enjoy! When he's not sitting in a coffee shop writing, or at a school or library or conference talking about writing, or out on the running trail thinking about writing, he's at home in Woodinville, Washington with his wife Judy, a junior high librarian.

a Rafflecopter giveaway
Posted by CCAM at 5:56 PM