If they don’t kill each other first... Superhero High by T.H. Hernandez

When the government unexpectedly ends the secret Genetically Enhanced Asset (GEA) program, Annarenee is uprooted from Dayton, the only home she’s ever known, and relocated to San Diego with all of the other GEA families. Queen of her public school, Annarenee is just another zero at Superhero High, a school without any sports teams. 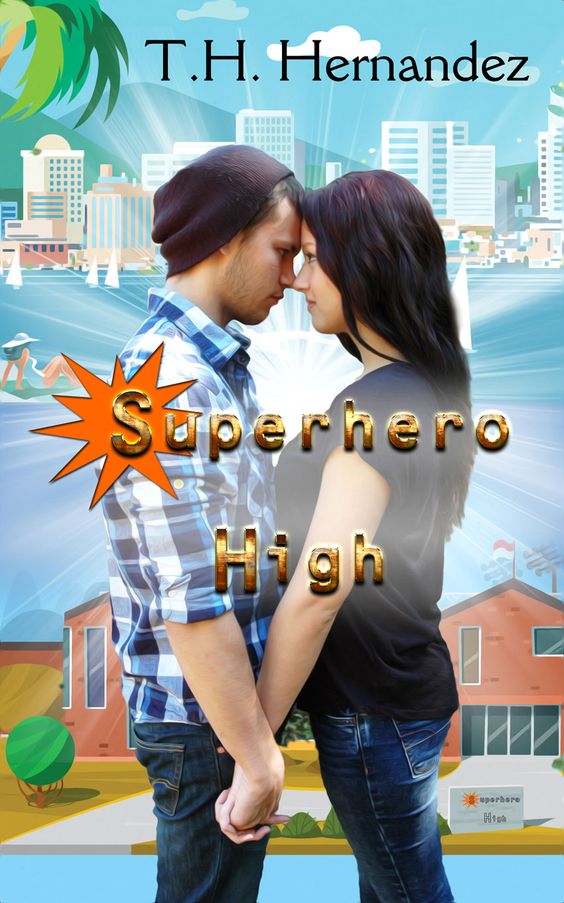 Sixteen-year-old Annarenee Stevens is the sole member of her family without a super power. The only time she feels powerful is in the pool. With her sights set on swimming for U.C. Berkeley, she’s ready to win it all at the State championship and secure her future.

When the government unexpectedly ends the secret Genetically Enhanced Asset (GEA) program, Annarenee is uprooted from Dayton, the only home she’s ever known, and relocated to San Diego with all of the other GEA families. Queen of her public school, Annarenee is just another zero at Superhero High, a school without any sports teams.

With the end of the program, her hero older brother now needs a college education, too, meaning the only way Annarenee is getting into Berkeley is on a scholarship. Her dream is slipping through her fingers, no matter how tightly she clings to it. To make matters worse, super hot superhero, Ren Gonzalez, is paying too much attention to her. The kind of attention that has Ren’s ex-girlfriend intent on making Annarenee’s life even more miserable.

But when heroes begin disappearing, zeros and heroes will be forced to team up in order to solve the mystery. If they don’t kill each other first.

Smith slides in beside me and drapes his arm around me, kissing the side of my head.

Ryan glances over his shoulder before backing up. “You guys are coming tonight, right?”

“Wouldn’t miss it,” Smith answers for both of us.

The drive to my house is less than five minutes. On the way Smith leans in and whispers in my ear, “Anyone going to be home?”

I shake my head then wonder if I should have lied. Smith’s been hinting more frequently that he wants to have sex. We’ve been dating for three months, but unlike Smith, I’m not ready. Call me old-fashioned, but I want my first time to be special. I like Smith, he’s cute, popular, and funny, but I’m not in love with him. Plus, I’m pretty sure you shouldn’t keep secrets from the person you share the most intimate part of yourself with, and I’m keeping a huge secret from Smith.

We pull up in front of my house, and Smith and I hop out, grabbing our stuff from the back.

“I’ll call you later,” Ronny yells as Ryan roars off.

I wave as they turn the corner and disappear, nerves twisting in my belly as Smith takes my hand. I glance at him, my gaze drawn to his crystal blue eyes beneath messy-wild blond hair. Smith moved here last summer and rapidly became one of the most popular guys in our class. He’s always tan and his body is cut, a result of time spent in the pool or surfing in his native Florida. Every single girl in our school, and possibly even a few with boyfriends, would be thrilled to have my problem. I need to figure this out soon before he decides he’s tired of waiting.

Smith guides me up the walkway toward the porch, and I wonder how far I can let him go this time before I put on the brakes.

Our front door opens and two men dressed in black suits, white button-ups, black ties, and sunglasses exit our house. The taller of the two seems to size me up behind his dark lenses before he nods and passes. I turn and watch them get into a black Escalade parked across the street.

My brother, Noah, cruises up and parks his vintage blue Mustang convertible in the driveway. He climbs out, his eyes glued to the SUV as it pulls away from the curb.

Smith snorts. “What are the Blues Brothers doing here?”

I don’t share his humor and instead turn toward my brother, eyebrows raised in silent question.

Noah shakes his head, and inside my own head, I hear, “I don’t know, they were blocking me.”

A chill runs through me starting in the pit of my stomach. It’s not unusual to get a visit from the Men in Black, but my parents should be at work, and Noah should still be at his school for another couple of hours. Something is wrong.

He leans in and kisses my cheek. “Sure. Wear something sexy.” He smiles and waggles his eyebrows.

“Douchebag,” Noah says only to me before heading inside.

About the author:
T.H. Hernandez is the author of young adult books. The Union, a futuristic dystopian adventure, was a finalist in the 2015 San Diego book awards in the Young Adult Fiction category.

When not visiting the imaginary worlds inside her head, T.H. Hernandez lives in usually sunny San Diego, California with her husband and three children, a couple of cats, and a dog who thinks he’s a cat, affectionately referred to as “the puppycat.”

You can find her online at:

Not my favorite cover, I'm picky about them I suppose but we all know the cover is a very minor part of a book and only really influences catching your eye to pick it up. You brought it to my attention and skipped that issue so thank you, I may read this one if I can find the time. :)
Maranda H.