Ready your flintlock! Sharpen your sword! - Windsong & Requiem - Of a Great Deep by Chad Hunter

"Hunter expertly interweaves folklore and superstition with biblical knowledge and history to spin a tale of dark fantasy. His story snares the reader from the first page and doesn’t relinquish its grip until the back cover closes. He imbues his characters with depth and unique traits until they become real people. They show that nothing is black and white, that there is more to each person than first meets the eye." Cindy, Goodreads 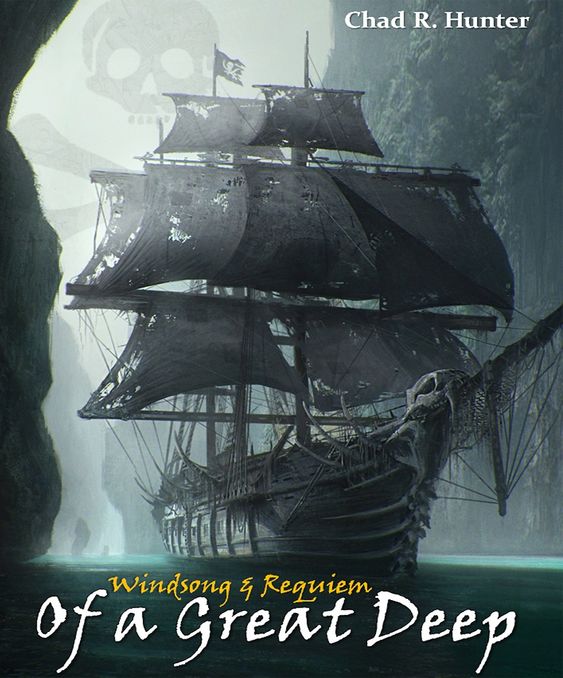 The year is 1716. The world is in the Golden Age of Piracy and fabled ships sail the seven seas. One such vessel is the Requiem, captained by the young but wise, brave but dubious Nabopolassar “Bo” Travis. Alongside his first mate Ghassan, quartermaster Winter Burke and navigator Glover, Travis seeks treasure, female company and good drink. The Requiem’s legendary adventures are filled with tales of monsters and myths - all of which are true. Now, someone or something is sailing the seas in search for a treasure chest – a chest that holds unknown riches which only promise to change the world forever. Captain Travis, his crew and a beautiful young map reader must brave the dark and the deep to find the treasure.

Will the Requiem find the X on the spot before the infamous Captain George “Bloody-Face” Fiddick does? Will Travis uncover the secret behind the cursed black ship which changed his young life forever? And will the treasure chest truly be full of riches or does something far more insidious lie in wait?

Ready your flintlock. Sharpen your sword. The Requiem awaits.

When we hear the word “pirate,” we often picture a swashbuckling rogue with  sword in hand and flintlock pistol. To us, these sea-sailing renegades fought and drank with eyepatches, peg-legs and reckless abandoned. In reality, the men and women that were called pirates ranged from ragtag cutthroats and slavers to opportunistic entrepreneurs making coin from thievery and pillaging. So how did the true pirates and buccaneers become today’s larger-than-life, romanticized seafarers that we read about and watch on film? How did any of these real-life murderers and sea-scourges give way to Captain Hook, “Pirates of the Caribbean,” and now “Of a Great Deep” and its hero Captain Bo Travis?

The word “pirate” itself has a varied etymology. In Latin, the word finds its origin from the word pirata meaning "sailor, corsair, sea robber." In Greek, it stems from peirates meaning "brigand, pirate," and "one who attacks." The idea of fighting and stealing on the sea dates far beyond the time periods in our minds. Piracy goes back to ancient times. As long as humanity has been able to sail a boat, it has known pirates.

People threatened sea travel and commerce as far back as 1400 BC in the Mediterranean. Centuries later, sea-fairing attacks were waged in Greece, Rome and so on. Continuing throughout history, the eighth century Vikings used their ships to attack other vessels and sack towns. While the concept of piracy changed legal status throughout history (some pirates were legalized by governments), the idea of ships as weapons and transport for crime was universal. The Corsairs operated in North Africa. Pirate fleets amassed along the coasts of Asia and across the globe. Even into early United States’ history, the scourge of violence on the sea attacked the newly independent Americans. Throughout the time of the pirates, few places had as electrifying a history as the Caribbean.

Pirates did more than just attack and rob other ships. They smuggled merchandise. Some dealt in the slave trade and others dealt in wholesale murder.

So, given the truth of pirates’ brutality and their blend of thievery and naval terrorism, how did we get today’s “Pirates of the Caribbean,” “Assassin’s Creed: Black Flag,” “Black Sails” and now “Windsong & Requiem – Of a Great Deep?”

We can thank two writers (of course!) for our modern expectations of those who terrorized the seven seas. In 1724, Captain Charles Johnson published “A General History of the Pyrates.” Johnson himself is a blending of myth, legend and pseudonym and his book enthusiastically filled the minds with the dangerous existence of pirates and profiled larger than life characters. Johnson chronicled the adventures of Calico Jack, Charles Vane, Anne Bonny, Blackbeard and many others. It is this book that begins our current concept of the pirate.

Some century or so later, Robert Louis Stevenson publishes “Treasure Island” and the world would never be the same. This work of fiction gives us the ideas of buried treasure, treasure maps and parrot-befriending peg-legged men.

From these two books, the modern pirate is born. After “Treasure Island,” it was not long that movies such as “Captain Blood” and “The Sea Hawk” splashed onto the silver screen. Additional books such as “The Chronicles of Captain Blood,” “Queen of the Black Coast” and others followed suit with the archetypes built by Johnson and Stevenson. Now, the influences of Stevenson and Johnson can be read in “Windsong & Requiem of a Great Deep.”

So why is there enough cultural love to continuously bind the pirates of truth and the pirates of modern fiction? It would seem to come down to one fact - pirates, much like cowboys, represent the concept of freedom. We live in a world of meetings, e-mails, uncertain finances, annoying co-workers, demanding family and untested friends. Ours is a world that mires us in drudgery and worst of all, it is drudgery that we have graduated for, interviewed for and applied for.

Pirates, in our romanticized view, take life by the sails so to speak. If they needed money, they crossed perilous paths to abandoned beaches with hidden treasures. If someone angered them, they battled with swords and gunpowder. We love pirates because we expect them to be passionate, wild and free. Everything that we are not.

It is that same love that feverishly drove me to write “Of a Great Deep.” Captain Bo Travis is a young, seasoned, cocky pirate who captains the Requiem, a renowned ship with a legendary crew. Travis defines who he is and chases myths, treasure and the occasional dalliance of women and drink. Secretly, Captain Travis struggles with demons of his own, both emotional and real. Additionally, readers will meet Captain George “Bloody Face” Fiddick, an aging pirate who stoically fears his end will sever his chance to be remembered. In “Of a Great Deep,” readers will see if the wills of both pirates can withstand forces of the supernatural and the natural.

About the author:
Chad Hunter was born in East Chicago, Indiana. Raised by a single mother in the city's Harbor section, he is the youngest of four. Growing up in the Midwest and a proudly self-proclaimed "Region Rat," Hunter has written and published several books and novels. He has written for magazines and newspapers throughout North America and has been published in several languages. His writings have been called sophisticated yet humorous, sharp witted and unrelenting.   Most often, Hunter's writings have been considered so wide and diverse that they span a scale that would include multiple writers with multiple forms. In addition to being a published author and journalist, Hunter is also a professional speaker. Having presented to high schools, colleges and various other audiences, his talks and discussions center around the positive impact of literary and creative presences in one’s life. A large portion of Hunter’s focus is on the uncanny strength of human connectedness which is emphasized via the lens of writing and creativity.   Working in genres including dark fantasy, memoirs, science-fiction and anecdotal collections, Hunter weaves tales of monsters, heroes, zombies, wedding planning, technology, pirates and even black parakeets. With over ten books under his belt, If anything binds his varied styles, it is Hunter's theme of the human condition, humor and family closeness - all to the backdrop of romantic love, vibrant remembrance and even monsters themselves.

I second that! Thank you for having me!

These tours are great so thank you for all the hard work you all put into bringing them to us. We have picked up some terrific books thanks to all of you bloggers and the authors have some amazing books to read.

This book sounds great. Thank you

What books or movies influenced this book? Congrats on the book tour. Bernie Wallace BWallace1980(at)hotmail(d0t)com

To answer Joseph Wallace's question - I was greatly influenced by films like The Sea Hawk and Captain Blood. Also, very very influenced by the Sinbad films with the stop motion special effects. For those gamers out there, Assassin's Creed: Black Flag is an excellent game and a major influence as well.

Good stuff is coming! Thanks to all of you!

I would definitely buy that Golden Age of Pirates for my wall. It's gorgeous and I love pirates :D
Maranda H.

Sounds like a good book. Thanks for bringing it to my attention!