Sometimes, you don’t have a choice. - Heartwood by Nance Newman

Elathea is a typical teenager whose parents can no longer keep the family secret from her—that she is a descendant of an ancient race of women whose legend says only one progeny every hundred years or more will have the powers needed to face nature’s magical enemies. 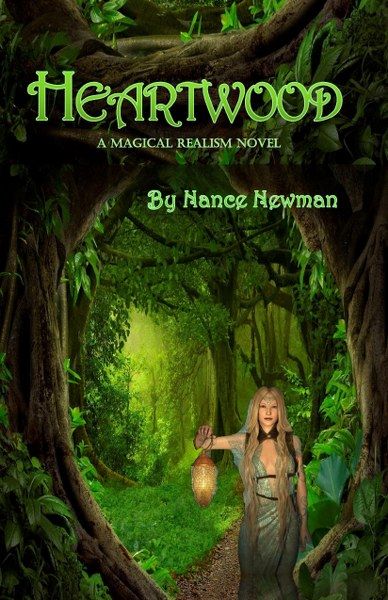 In the Adirondack Mountains the forests are dying by the hand of a demon whose only purpose is the destruction of the natural world.

Within the high peaks of the Adirondacks a magical edifice, Heartwood, appears yet remains hidden from the world. Inhabited by the descendants of an ancient race who have been protecting the natural world since the beginning of their existence, they will wait for the next true Xylem who is the only one powerful enough to fight the demon.

The battle will soon begin.

Heartwood weaves legend into reality as the world’s ecosystem is threatened by supernatural demons. Elathea is a typical teenager whose parents can no longer keep the family secret from her—that she is a descendant of an ancient race of women whose legend says only one progeny every hundred years or more will have the powers needed to face nature’s magical enemies. As her powers begin to emerge, they can no longer deny her destiny. They send her to Heartwood to learn about who she is and what she must do. Only Ela doesn’t want the job.

Sometimes, you don’t have a choice.

“Ela!”
The five-year-old stood just inside the edge of the woods wondering why her parents couldn’t see her. She hadn’t wandered far from their campsite. The child was fascinated by a butterfly painted in bold colors darting from one bush to the next. She zealously chased the insect as it fluttered up and down and sideways but all the while heading straight toward the woods that lined the back of campsite 222.

Ela was oblivious to the shouts, cries, and commotion that took place thirty feet from her. Her world at that moment was swallowed up by the intriguing creature that led her away from her parents and their thirty-foot fifth-wheel camper. She giggled with glee as she zigzagged in the path the butterfly took, her hands reaching out to touch its delicate wings.

“Ela’s missing!” a woman shouted. Ela stopped at the agonizing sound of her mother. She turned away from her playful pursuit. What was wrong? She could see them. They had to see her. She cocked her head and studied her mother who looked scared and was crying. Her mother was talking at such a fast pace Ela couldn’t understand what she was saying.

“Elathea!” Her mother was staring straight at her but it was as if she was invisible.

Ela heard her full name and the panic in her mother’s voice. That’s when she took two steps out of the woods and toward her parents and the camper.

“Ela!” her mother screamed and raced to the little girl. She picked her up and hugged her so tight she thought her mother was going to squish the life out of her. “Where were you? How many times have we told you to never wander off? You should never leave our view.”

“Mama, I was right here.” Ela felt hands touch her. Her father’s. She was finally able to pull away from her mother’s tight grasp and noticed strangers standing around.

“Thank you. Thank you very much for helping us.” Her mother’s voice sounded shaky.

Ela was confused. What did they help her mother with? What was all the fuss about?

“Mama, why couldn’t you see me? I was right over there.” She pointed to the spot where she was standing just inside the woods.

Her mother looked at her father. “I didn’t see her,” he said adamantly. “I looked over there.” She touched his arm. “I know you did. I didn’t see her either.” Her mother smiled at Ela and then added in a whisper, “She doesn’t want to get in trouble for wandering off.”

Ela looked back and forth between her mother and father. It was the first time she sensed that something wasn’t right, but it wasn’t a bad something. Well, maybe a little because her parents were upset that she was missing. But she wasn’t, so Ela did the only thing a five-year-old could do: she promised her parents she would never wander off again.

It was a promise she knew even at the tender age of five that she would not be able to keep. How can you keep a promise that was made because of something you didn’t do?

About the author:
I live in upstate New York with my two dogs; a 17 year old Min Pin (Zeus) and a female dog I recently rescued from the Puerto Rico hurricanes (I have been learning Spanish and she is learning English!). Her name is Ela and she is a joy.

I have been writing in some form or other since high school when I bought my first guitar (a 12 string for $50 from one of those magazines my mother used to receive in the mail) and began writing songs. In college, I started my first novel that I hope to go back to and finish someday.

I currently work for a school district in transportation as a router and dispatcher where I use software to solve the puzzle of getting 5600 students to many different schools, but my goal is to become a full time writer of novels and music. I try to fit writing in with my full time job and hobbies that include biking, gardening, hiking, kayaking and watching movies (lots of them and all kinds) I continue to write songs and perform with Dooley(my music partner) We have a CD of original songs and it is available for your enjoyment. Visit me at nancenewman.com to check it out.

I am really excited to share my work with you, and some days you might see me driving a big yellow school bus.

The cover looks awesome and I enjoyed the excerpt.

I love the cover-thanks for your giveaway

What a cool cover

I love the cover it is really eye catching

Thank you everyone for your wonderful comments on the cover of my new book, Heartwood. I am so glad you like it and I hope you get a chance to read the book and enjoy it as much as the cover!! I hope you all had a wonderful holiday and are ready for the coming year. Thanks again! Nance Newman

The cover seems to be a good representation of the book, based on the excerpt. Very nice!
digicats {at} sbcglobal {dot} net