she could use a little help - The Stone Awakened (Guardians of Erin, #2) by Judith Sterling

"Wonderfully written, it kept my attention as I turned that pages and with the paranormal mythology, I was hooked. You will really enjoy this tale and long for the next book in this series." Lori, Goodreads 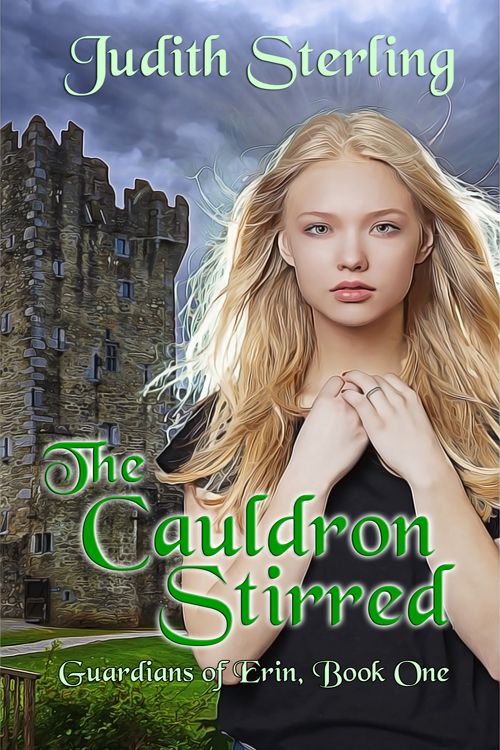 Since moving to Ireland, Ashling Donoghue has tackled one challenge after another. Now the mystery of her parents’ disappearance seems unsolvable. Are they dead or only missing? No one—not even the godlike Breasals—has a clue. Hope and fear war inside her, but she’s determined to find answers and stay strong for her siblings. Even as she hones newfound powers, her banshee-in-training sister Deirdre needs her support.

Ashling could use a little help herself. She’s struggling to navigate her first romance, and while Aengus Breasal stirs her body, mind, and soul, his nemesis Lorcan does too. Both men harbor secrets about her past life as Caer. One has ties to Aoife, the scheming wind demon whose influence is on the rise.

As the Stone of Destiny awakens, so does the conflict within.

A sudden gust whistled along the deserted corridor to my right. I turned as a robed figure disappeared up a winding stairwell.
“Fear not.”
Startled, I whirled back around toward the velvety voice. Lorcan! Clad in black like a character out of a 19th-century romance, he peeked out from behind a stone pillar.
“He’s merely a monk. That is, he was.” His ice blue eyes were intense, even in the soft light.
I swallowed hard. “Why are you here?”

No. Aengus is the one for me. Only Aengus. I grasped for an explanation, an excuse that would lighten the weight of guilt dragging me down. I’m asleep, and this is all just a dream.

I regarded him through narrowed eyes. “You spied on us?”

“Don’t you think I could’ve felt it?”
“That’s not a straight answer. And I don’t know you well enough to guess what you could or couldn’t feel.”

His pupils encroached on the lighter blue. “Your soul knows me.”

My pulse quickened. He was every bit as handsome and alluring as Aengus, and my mutinous body knew it.
Goodreads ** Amazon ** Barnes&Noble ** The Wild Rose Press

About the author:
Judith Sterling's love of history and passion for the paranormal infuse everything she writes. Flight of the Raven and Soul of the Wolf are part of her medieval romance series, The Novels of Ravenwood. The Cauldron Stirred is the first book in her YA paranormal fantasy series, Guardians of Erin. Written under Judith Marshall, her nonfiction books--My Conversations with Angels and Past Lives, Present Stories--have been translated into multiple languages. She has an MA in linguistics and a BA in history, with a minor in British Studies. Born in that sauna called Florida, she craved cooler climes, and once the travel bug bit, she lived in England, Scotland, Sweden, Wisconsin, Virginia, and on the island of Nantucket. She currently lives in Salem, Massachusetts with her husband and their identical twin sons.