how hard can that be? Murder, Curlers Series by Arlene McFarlane 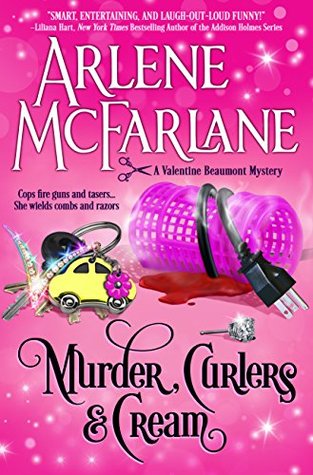 Valentine Beaumont is a beautician with a problem. Not only has she got a meddling mother, a wacky staff, and a dying business, but now she’s got a dead client who was strangled while awaiting her facial.

With business the way it is, combing through this mystery may be the only way to save her salon. Until a second murder, an explosion, a kidnapping, death threats, and the hard-nosed Detective Romero complicate things. But Valentine will do anything to untangle the crime. That’s if she can keep her tools of the trade in her bag, keep herself alive, and avoid falling for the tough detective.

In the end, how hard can that be?


“You wound a perm rod around a man’s what?” Detective Romero stood in the middle of my Mediterranean-styled salon, hand on his gun hip, legs spread wide. His deep voice was laced with cynicism, and his blue eyes pierced me with a look that said now he’d heard everything.
I know it sounded outrageous, but good lord. It’d been several years since “Local Beautician Valentine Beaumont Uses Perm Rod to Curl Murderer’s Gonads” made front page headlines in the Rueland News. Was I ever going to live that down? It was an awful picture of me they’d run too, considering I was soaked in mud and covered in cuts and bruises.
Besides, there was another crisis at hand. I mean, a dead body had just been removed from the facial bed in Ti Amo—one of my treatment rooms, not thirty feet down the hall. Didn’t this detective, in his faded jeans and brown plaid shirt, think that was a little more important?
I pulled at my tight-knit top, trying not to let him get under my skin. “For the record, that perm rod saved me from being knifed to death. Anyway, it sounds worse than it was.”
“Worse than it was! Lady, that’s about as worse as it can get for a man.” He blew out a sigh. “I’d love to hear the full story on that one day.”
I smiled sweetly. “If you’re nice to me, maybe one day I’ll tell it.”


He glared at me, probably not certain if I was being sarcastic or sincere. Frankly, I wasn’t sure about that myself. 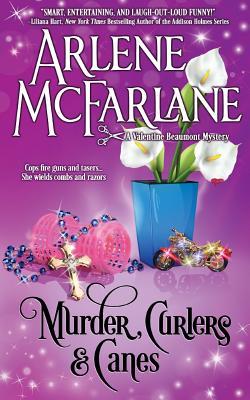 Valentine Beaumont is back in her second hair-raising mystery, this time, trying to find out who had it in for an elderly nun. Only trouble is there are others standing in her way: hot but tough Detective Romero, sexy new stylist Jock de Marco, and some zany locals who all have a theory on the nun’s death.

Between brushing off Jock’s advances and splitting hairs with handsome Detective Romero, Valentine struggles to comb through the crime, utilizing her tools of the trade in some outrageous situations.

Question is, will she succeed? 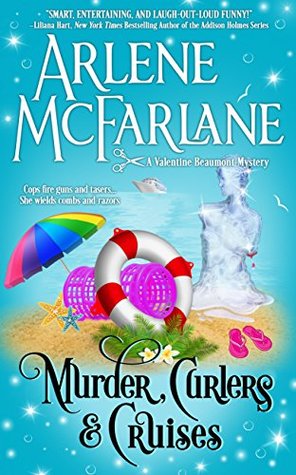 “A fun-filled ride. A zany cast of characters. And a quest to find a killer. Another great book in a wonderful series!” – Wendy Byrne, USA Today Bestselling Author of the Izzy Lewis Mysteries

In her third fast-paced mystery, beautician Valentine Beaumont and her madcap crew sail the high seas on a Caribbean “Beauty Cruise.” When a bizarre murder takes place onboard, Valentine finds herself swept into the middle of the investigation.

If things aren’t bad enough, her mother is playing matchmaker, a loved one is kidnapped, drug smuggling is afoot, a hair contest proves disastrous, and a strange alliance between tough Detective Romero and sexy stylist Jock de Marco rubs Valentine the wrong way.

Will this impulsive beauty sleuth comb through the catastrophes and untangle the mystery, or will this voyage turn into another fatal Titanic? With Jock and Romero onboard, it’s destined to be a hot cruise!

About the author:
Arlene McFarlane is the author of the Murder, Curlers series. Previously an aesthetician, hairstylist, and owner of a full-service salon, Arlene now writes full time. When she’s not making up stories, or being a wife, mother, daughter, sister, friend, cat-mom, or makeover artist, you’ll find her making music on the piano.

Arlene lives with her family in Canada. 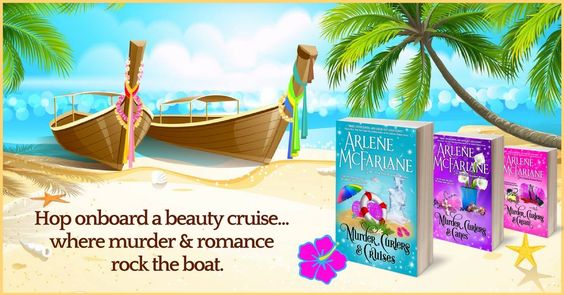 I like the covers-favorite would be Murder, Curlers and Canes

Murder, Curlers and Cruises appeals to me most cause I love books about cruises!
digicats {at} sbcglobal {dot} net