a diabolical plot... Gunfight at the Old Leake Canal by GB Hope

"[M]assive plot idea, but that we follow a small group of people through it. It was short and fun. " - Caroline, Goodreads 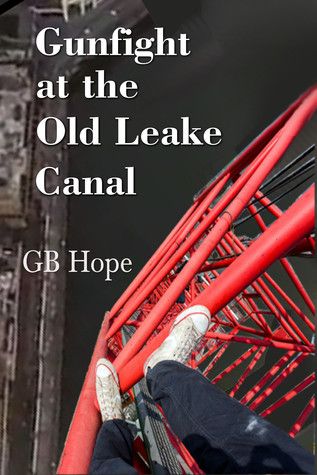 In Liverpool, England, 18-year-old student and Freerunner, Bodie, survives an assassination attempt and flees for his life. His only thought is to secure the safety of girlfriend, Lily, and reach his journalist cousin, Anthony.

Bodie has stumbled into a diabolical plot from the world's governments to end terrorism, famine and global warming in one swift swoop. So begins a race for survival, joined by a variety of other characters, moving from one set piece to the next, as the world that everyone knows is about to change forever.

Bodie turned to pass over the slip of paper with the address written on it, but Dean wasn’t there any more, instead replaced with a shocking splash of red up the wall. Bodie was momentarily nonplussed, slowly looking down at Dean, with half the man’s face missing, then back at the wall which he realised was smeared with the American’s blood and brains. Stunned, Bodie allowed his legs to collapse from under him, just as another high calibre bullet came through the window and embedded itself in the wall with a dull thud.

Many thanks for this blog tour

This sounds intriguing. Excited to see how it plays out.

Yes, both interesting and intriguing and only 0.99 for duration of this tour.

thanks for sharing the excerpt sounds great

This sounds great. Thanks for the chance.

Thanks for your interest. Hope you enjoy

Thank you so much for taking time to bring to our attention another great read. I enjoy these tours and finding out about many terrific books.

Thank you for your interest, James Robert. Hope you enjoy the book

Hope you enjoy it, Marisela

Wow! That cover makes me want to read the book!

Glad you like it, Wanda. The cover does depict a scene from the story and was done by Shear Art book cover design http://shearart.blogspot.com/

The cover grabs my attention and the excerpt sounds great!

The cover does depict a scene from the story, as does the title. As a reader, I hate covers and titles that have nothing to do with the book, and so I advised this author to keep it real. The wittiness of the title is all down to him, however: GB Hope

It's only $0.99 for the duration of this tour and I wish you good luck in the rafflecopter draw.