Stand up and fight or lose everything - Albion Moon (Albion Moon Chronicles #1) by by M. L. Mastran

As this secret from the old world closes in on Evaline, she tries to sort through her disconcerting feelings towards the mysterious Mason. He not only seems to always know when she is in danger, but he is insistent on protecting her, no matter the cost. 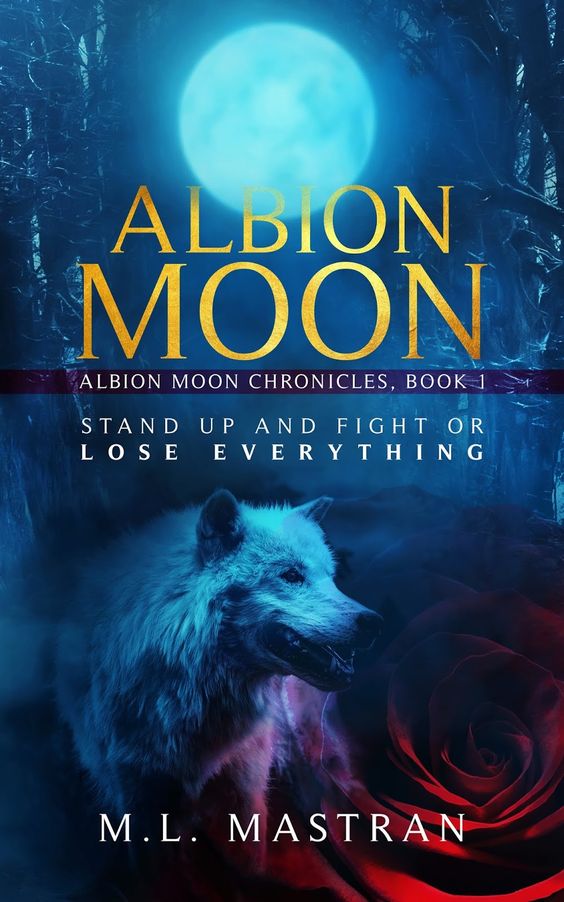 Stand up and fight or lose everything

Evaline's brother is missing. She's desperate to find out what happened to him. As she digs deeper into his disappearance, the mystery reveals an ancient family secret carried through the bloodline that began centuries ago in the Scottish Highlands. As this secret from the old world closes in on Evaline, she tries to sort through her disconcerting feelings towards the mysterious Mason. He not only seems to always know when she is in danger, but he is insistent on protecting her, no matter the cost.

As the old world collides with the new, Evaline discovers she must choose to stand and fight or risk losing everything, and everyone, she holds dear.

How it is decided what POV to use in a story?
I don’t always use a point of view. Sometimes my stories are told in the Narrative Style so to that it’s a moot point. However, for Albion Moon, I chose to have a character POV. For this particular book, it is important for readers to be able to experience the story and events as the character does. They know what the character knows and nothing else, unless you change POV to another character, which gets tricky.

Which is the preferred one and why?
I think in some instances, it may not be the main character but perhaps someone on the outside but still part of the story. It would depend on the angle you want readers to see the story. For instance, if we take Anne Rice’s Interview with a Vampire, would the story still be the same if it was told from Lestat’s point of view verses Louis? Likely not. His experiences are different, not to mention he comes from a different background than Louis. So again, it depends on what angle of the story you want readers to know.

POV in Albion Moon?
As I mentioned above, Evaline is the main point of view in Albion Moon. For this book, I did a lot of world building and since my protagonist Evaline is the focus, it had to be her. As I mentioned above, it was important to have my readers experience the story as Evaline does. Only a couple times does it change. It made sense for her to be the primary POV because she is the one that readers will connect with. She is the one everything is happening to. To go deeper, Evaline makes you think, “what would I do?” She also represents what we would want to do if what happens to her, happened to us.

Over the next couple days, I picked up applications from the couple of banks and other places in town as well as in Shasta, the next town over. On Thursday, Kristy, Lizzy, and I hung out and went for ice cream downtown. We hit a couple of stores as Kristy wanted to get some clothes. I loathed clothes shopping. I peeked at the racks while Kristy tried stuff on and Lizzy weighed in. She got a text. One of the other servers had called off, and Mason needed her to come in.
“I have to get to work. Sorry, Kristy,” Lizzy said.
“That’s fine,” Kristy said. “Can we get some lunch there when we take you in?”
I shook my head slightly at her scheming.
“Absolutely,” Lizzy said, looking at me. “Let’s go.”
We piled into my car and headed out onto Old River Road. It was a great day for a convertible ride. The late summer sun beamed on us as we drove down the road. I had AC/DC blaring, and as we rounded a curve, I heard a siren. Peering into my rearview mirror, I eyed the red flashing police lights atop one of the town’s two SUV police units.
Kristy glanced back. “What the fuck? You weren’t speeding.”
I looked down. I was just below the speed limit. After I pulled over, I got out my registration and insurance. The cop approached my door, and what I saw caused a huge lump to form in my throat.
Campbell had a smug look on his face as he spoke. “License, registration, and proof of insurance please.”
I handed them over without making eye contact.
He examined my license, which still had my Sacramento address on it. “A little way from Sacramento, Miss Bennett, aren’t we?”
“Yeah, I guess I am.”
“Where are you headed right now?” His tone turned from mocking to icy.
“I need to get her to work,” I said, indicating Lizzy.
He eyed Lizzy, who appeared annoyed by his questions. “Oh, a Cowan sister. How fitting. Tell your brother I got a nice cell waiting for him.” She didn’t say anything as his attention moved back to me. “So, are you here on vacation?”
My blood boiled as the dream I had with Jimmy came back to me. I glared at Campbell. “I’m visiting family for a while.”
“So, what is the address you’re staying at in town?”
“What does that matter?” Kristy interrupted any response I was about to make. “What the f—?”
“Smart ass like your brother,” he said, cutting her off. “He’s a great bunk mate for Jonas.”
Now speechless, she sat there.
After opening my door, he indicated for me to move. “Please step out of the vehicle.”
Not wishing to cause a scene, I complied and stood by my car.
He turned me around. “Face your car, hands on the hood.”
Kristy found her voice again. “Are you fucking kidding me? We weren’t doing anything!”
Campbell flashed her a look. “Shut up and don’t move.” He then patted me down. “Do you have any weapons or drug paraphernalia I need to be aware of?” He spun me back to him.
Looking at him dead in the eye, I answered, “No.”
Holding my elbow, he walked me toward his vehicle as he eyed Kristy and Lizzy, who were clearly uncomfortable with what was happening. Despite my apprehension, I followed him. He took me behind his patrol truck and returned my license.
“I suggest you watch yourself, Miss Bennett. These back roads are dangerous, and if something were to happen, it could be quite a while until you’d be found.” My stomach churned as he leaned into me and whispered, “A woman like yourself, all alone, might entice trouble.” He reached for my breast, and I reacted quickly.
Shoving the bottom of my palm up into his lip, I knocked him back but didn’t wait to see his reaction. I returned to my car, got in, then took off. I was sure he was going to follow, but he didn’t.
Kristy turned to me. “We need to report him, Evaline. That was wrong in so many ways.”
Shaking my head, I said, “It will make things worse, trust me. Just forget it, okay?”
She gave Lizzy a concerned look, who then asked, “Why did he take you back there?”
I didn’t say anything as we drove into the parking lot, parked, then got out.
Kristy was still fired up. “This is such bullshit. He made a move on you, didn’t he?”
“Just drop it, Kristy, okay? It’s over. I wanna forget it.”
The dust kicked up in the parking lot as we made our way through the front doors. A few patrons were seated at the bar, and several booths and tables were occupied. We headed to an open booth as Lizzy returned to the back.
While still a bit shaken from the encounter, I pondered what had just happened. A knot was in the pit of my stomach as thoughts raced through my mind.
Does he know I know what he is? Will he try to hurt what family I have left? Will he hurt me to find out what I know? I thought of my dream again—Jimmy had warned me. Or will he kill me?

About the author:
Nothing captures the attention of M.L. Mastran more than writing a good story with amazing characters and a history arc that made the history books. This is Albion Moon in every sense.

On the flip side, M.L. can also journey to another world completely and pull the same elements with fantasy and make the reader yearn for more. Her uncanny ability to blend genres makes her unique to the literary world and an absolute reading joy. From the first moment you open the page, curiosity will pull you in and keep you engrossed in the story as you take the voyage with the characters to different places and times; to experience the events as they unfold.

Whether being told from a one character perspective or several points of view, her stories will unfold in your mind like a movie playing in your head. This is what pushes M.L to write her stories. It’s the thrill of the read and the drive to carry readers away that will make this trip to the literary world of imagination all the sweeter.

Thank you for hosting me! If anyone has any questions about myself or Albion Moon, please let me know. Above all, I hope you have as much fun reading my story as I did writing it. :)- M

Thank you!! I hope you enjoy it. Please let me know what you think after you read it. You can reach out to me via Twitter, FB, or Instagram. :)

Gorgeous cover art and a great excerpt. I think this would be a good one for me.

Hi Laura! Thank you so much for your kind words! I'm so happy it seems like something you want to read. Please let me know your thoughts when you're done. You can reach out to me via Twitter, FB or Instagram. Enjoy! -M