"His way of telling stories is fascinating. Although this book is pure fiction and the characters are entirely made up the way he tells the story and the details he includes really gets you thinking. This story showcases how even though you might want to give up you never should. If you give up you never know what awaits you in the future." Sheila, Goodreads 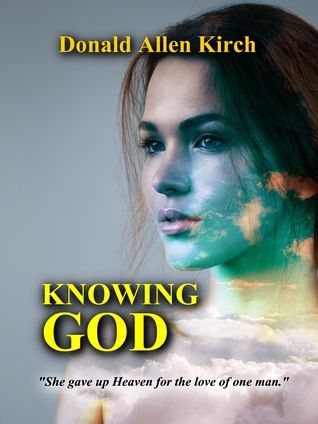 Nathan Andrews was a good man. It came as quite a surprise to him that he wanted to die.

After a "botched" attempt to commit suicide, Nathan is haunted by the mysterious image of a woman, during a Near Death Experience. She was "perfect" and everything a man would seek within a life partner. With the simple utterance "Go back!" she forever conquered his heart.

Leaving a mental hospital after that, Nathan runs into an odd woman named Amanda. She barely knows English, doesn't recognize the simple things, and finally confesses an all-important truth to him: She...is GOD!

After some subtle convincing of the claim, and confronted by a winged man named "Gabriel," Nathan accepts this fantastic reality. A reality that will change his world, and the world of Mankind...FOREVER!

Chapter Seven
"I...am...God."
Upon hearing these words, I did not know whether to laugh or cry.  It was just my luck to find the woman of my dreams, and she was a fruit loop.
When Amanda made this statement, she closed her eyes and appeared to be somewhat embarrassed in the making of the claim.
She opened her eyes, looking up at me.
"You do not believe me," she challenged.
"It's not that," I sarcastically joked, totally annoyed.  "Not every man gets a chance to play 'baseball' with the Almighty."
"Baseball?"  Amanda's face projected confusion.
I pointed to her lips, explaining.
"First base."
Her breasts.
"Second base."
Her ass.
"Third base."
Between her lovely legs.
"Home plate."
Amanda nodded her head, understanding.
"So, that's what he was referring to."
"Who?"
"George Herman Ruth."
"Babe Ruth?  The ball player?"
"Know him personally," Amanda beamed.  "Never knew that he had been using the term as a mating ritual."
"I guess you would know him, seeing that you're God."  I scoffed, rolling my eyes.
Amanda turned quiet, studying me.  I could clearly see that my disbelief hurt her.
"You do not believe me," she challenged again.
I pointed at the hospital I had been checked into after my attempted suicide.  Not far from where I first encountered Amanda crying on a park bench.
"You see that building?"
"Yes."
"There are over a dozen people in there who not only claim to be God but Jesus too!  Not to mention Napoleon.  One guy thinks he's Hitler, and he's Jewish."
"You do not believe," Amanda cried, her eyes incredibly sad.
"I believe in...something," I stated, stammering.  "That winged-guy seemed able and willing to grab you.  He seemed keen on taking you away from here.  Why?"
"His name is Gabriel."
"Archangel Gabriel?" I gawked.  "That...Gabriel?"
"The same."
"This is too weird!"
"What would you have me do?" Amanda asked, in tears.
I felt somewhat guilty for making the woman cry.  Honestly, I held high feelings for her and did not want to do her any real harm.  But, frankly, the woman was crazy.
"Tell me, if you are God, why did you come here?  And...why as a woman?"
Amanda stopped crying, giving the question thought.
"Because of you."
"Me??"
Amanda nodded her head in what appeared honest confirmation.  "You needed someone.  You chose my form.  I was there when you tried to take your life.  You...needed me."
"I needed you?" I repeated.
"Yes."
"What about all the other billions of people on this planet?" I asked, somewhat skeptical.  "Don't they need you too?"
"Hey," Amanda retorted.  "I'm only God.  One person at a time, you know?"
I became incredibly awestruck.
"This isn't happening."
"But, it is."
"You can't be...God," I yelled, not caring who could be listening.
"Would you mind keeping your voice down on this one?" Amanda cautioned, looking around.  "Thank you, very much."
"Prove it!" I challenged.
"How?" Amanda asked.
"Do something that only God could do."
Amanda started to say something but paused.  She gave the challenge some consideration.
Her face formed a wicked smile.

About the author:
DONALD ALLEN KIRCH lives in The United States of America. He is an avid reader of history, Sherlock Holmes Mysteries, the paranormal, and is a "hardcore" Doctor Who fan. After spending two weekends in the famous "Sallie House," a "haunted house" in Atchison, Kansas, he is one of the only authors of his craft who can claim to have been attacked by a ghost!

Author's Giveaway
a Rafflecopter giveaway
Posted by CCAM at 7:44 PM

Interesting! This isn't my usual type of book but I'm really intrigued by it based on its synopsis.

Thank you for the wonderful comments! I look forward to any questions you have, and I am excited and honored that YOU took time from your day to discover who I am and what I LOVE to write. All my best!

The story sounds wonderful. I enjoyed the trailer and the cover is beautiful.

This looks like a very intriguing book. This is something that I would enjoy reading. Thanks for sharing the excerpt! :)

Thank you all for the WONDERFUL words! I sincerely hope that you enjoy the book.

From reading the featured review and the description, this sounds like a great read.

What a gorgeous cover

What a really good cover and intresting story line