Part of a burgeoning ancient prophecy, Shea's sole focus is to protect her sisters
Determined to control their own fate, they devise a bold plan to trick their adversaries. 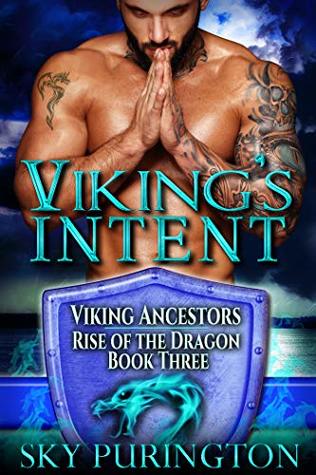 Part of a burgeoning ancient prophecy, Shea's sole focus is to protect her sisters.

Not become mated to a Viking of her dragon ancestor's choosing. If that happens, she might lose not just her independence but a matchmaking gift that brings people together. A gift at risk when she's kidnapped by a stubborn, frustratingly handsome barbarian who takes her on a whirlwind adventure through tenth century Scandinavia.

Though at odds with the twenty-first century beauty from the moment he meets her, Viking Davyn Sigdir steals Shea away to keep her safe from multiple enemies set on making her theirs. Unfortunately, he underestimates how alluring she can be when it suits her. How feisty and headstrong she is as she tries to outwit him at every turn. Yet the fiery strife between them only draws them closer, and soon their unwanted attraction becomes hard to resist.

Determined to control their own fate, they devise a bold plan to trick their adversaries. One that could keep Shea's matchmaking gift intact plus end the prophecy and ongoing war. All they have to do is get along and not give into temptation which should be simple for two people determined to remain apart. Or so they hope as a passionate high-stakes war of hearts ensues in Viking's Intent.

“To heck with this,” she muttered, removing her fur cloak. She made a come-hither motion with her hands as she sauntered forward, soberer by the moment as she homed in on new prey.

“If you need to vent on someone,” she called out, “I’m right here, beast.”

The crowd parted into a circle and sparks seemed to spit higher into the air as Davyn’s fist froze before landing on Soren and he slowly turned his head her way.

“You’re mad at me, right?” She shrugged and held her arms out in surrender as her vision hazed red and her dragon eyes flared. “Then take it out on me, beast!”

He pulled away from Soren and narrowed his eyes on her. “I will not hurt you.”

“But you already are,” she spat into his mind. “And you know it.”

He didn’t respond telepathically just kept his eyes narrowed as they circled one another. He wore a sleeveless jerkin, his arm muscles flexing as he shook his head. “I do not fight women.”

“You do now.” She fingered the hilt of the dagger at her side. “Your choice whether it’s hand to fist or all weapons on deck.”

“I do not fight,” he began but snapped his mouth shut and dodged when she whipped a dagger straight at his face.

“Weapons it is,” she announced, her adrenaline already racing. She had never battled a man his size with his skills and looked forward to it. Her eyes went to Halla. “Suggestions?”

Halla looked from Davyn to Shea, the grin on her face blossoming into a wide smile as she began tossing Shea her weapons. A few daggers, an axe and a small mace of all things.

Halla beamed and nodded. “As I am sure I will like yours, Cousin.”

Shea winked as she sheathed the daggers, tucked the mace away and started with the axe as her eyes narrowed on Davyn again. “I’ve never used one of these, but I’m sure I can figure it out.”

“Thanks to your DNA,” he said, switching modes entirely as he realized they were doing this. He was becoming less the heroic protector and more resolved to show her what a man was capable of.

“Damn straight.” She offered a charming, yet tempered grin. “Just remember when I beat you, that I gave you a heads up. You know several of my tricks now.”

“Yes I do,” he growled as one of the women who had hung on him earlier boldly gave him an axe and an eyeful of her cleavage. “Rest assured, I will not fall for any of them.”

She purposefully dropped her eyes to his groin as she ran her finger along the blunt edge of her axe’s blade and her tongue slowly and suggestively along her lips. Her tone was reluctant but wholly confident when she said, “No, I can’t imagine you’ll let your cock…ee issues get in the way.”

A small smile curled his lips, his eyes still locked on hers as he caught a sword Eirik of all people tossed his way. Meanwhile, the bodran drums that had faded started up again, and the excitement of the crowd stirred as more people filtered in to watch the fight.

She grinned right back at him, welcoming the same adrenaline rush that had filled her in the fight clubs back home. Only now she was in human form. No biggie. She rolled her shoulders, confident she could hold her own thanks to her DNA and plain old I-need-to-smack-that-smug-ass-look-off-his-face feeling she felt toward Davyn right now.

As they continued circling each other, she felt his rage building again. Not at her but at the twins. At what they did to her. How they touched her. How it made him feel. But what about her? How it made her feel? That was the key, though, wasn’t it? The great divide between them still. One he should have already asked her about…should have been concerned about.

Using that as the fuel she needed, she roared and raced at him, swiping the axe at his calf as she slid by only for him to spin and swipe his blade at her. She ducked, spun on her knee, scooped up a handful of dirt and flung it in his face before she slammed the hilt of her axe into the back of his knee and ducked away.

When he grunted in pain and fell to his knee, she spun back, saw red and swung the axe at his neck with all the fury she felt. Seconds before he lost his head, he ducked then stayed low, spinning with a leg outstretched but she was ready and leapt over it.

The crowd roared with approval as they sprang apart and started circling again. His dragon eyes were out now, and she loved it. She loved this. Fighting him. Pushing him. Making him face the fact that she could easily kick his butt.

“Easily?” he finally muttered into her mind. “I don’t think so, little Cupid.”

What he did next surprised even her.

About the author:
Sky Purington is the bestselling author of over forty novels and novellas. A New Englander born and bred who recently moved to Virginia, Sky was raised hearing stories of folklore, myth, and legend. When combined with a love for history, romance, and time-travel, elements from the stories of her youth found release in her books.

Purington loves to hear from readers and can be contacted at Sky@SkyPurington. Interested in keeping up with Sky’s latest news and releases? Either visit Sky’s website, www.SkyPurington.com, subscribe to her quarterly newsletter or sign up for personalized text message alerts. Simply text 'skypurington' (no quotes, one word, all lowercase) to 74121 or visit Sky’s Sign-up Page. Texts will ONLY be sent when there is a new book release. Readers can easily opt out at any time.
Love social networking? Find Sky on Facebook and Twitter.

Thanks for the great excerpt.
sherry @ fundinmental