Resolved to keep his life simple, Chad has his hands full running his delivery business and supporting his adopted family. So why can’t he get that withdrawn city girl, Julia, off his mind? 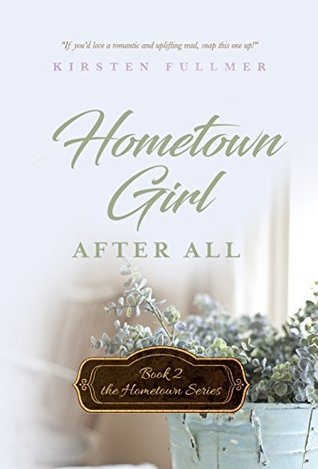 Julia lost everything while she was ill. Self-conscious and alone, she’s moved to Smithville, determined to hide away in her rundown Victorian house. Little does she know, she can’t hide anything in a small town, including her interest in the deliveryman.

Resolved to keep his life simple, Chad has his hands full running his delivery business and supporting his adopted family. So why can’t he get that withdrawn city girl, Julia, off his mind?

Will the eccentric but well-meaning Smithville folk push Julia and Chad to open up, or will the emotional toll drive them both back into seclusion?

Ordering Bobby to move toward the wall, Chad set his end of the heavy hutch down and eased it into standing position. “This thing weighs a ton,” he groaned, rubbing his back.

Bobby flopped back against the wall, his chest heaving and eyes bugging.

Glancing back and forth between the kitchen and the hutch, Julia frowned. “Do you think this will work?”

Chad brushed his hands together. “Will what work?”

Reluctant but with no one to ask, Julia waved for him to follow and wandered into the kitchen, Ringo at her feet. “I bought those two hutches to put on either side of the sink,” she said over her shoulder, “but the sink needs to be moved under the window.”

Trailing behind her, Chad stopped in the center of the kitchen. She continued toward the old sink and ratty broken cabinets. He glanced from the sink to the window. “You’re not going to put in new cabinets and counter tops?”

“I don’t think so...” Julia answered, deep in thought, purposely keeping her gaze from Chad as much as possible.

He walked in a circle, critically surveying the sink, then stared at the wall with a window. “I’m not sure the sink and both those hutches will fit along this wall.”

Julia winced, her eyes finally settling on his face. “Yeah, I should have measured before I bought them.”

“Don’t panic yet,” Chad muttered as he unclipped the tape measure off his belt. With an efficient whir and a click, the tape spread along the floor from wall to wall. “Let’s see, looks like twelve-foot, one and a half clearance from base board to base board,” he mumbled, rewinding half the tape.

He moved to the sink and Julia scuttled out of his way, as if to avoid the masculine force field he emanated into the room. He stretched the tape across the length of the ancient piece of porcelain and bent to get a closer look. “Almost thirty-six inches.”

The tape retracted with a snap. He crossed his arms across his chest and stared at the stained grooves of the drain board. One calloused hand reached out to test the old fashioned hot and cold taps with X-shaped handles. “You really want to keep this dirty old thing? I’m sure you could get a good deal on a nice new one...”

Julia wandered back to the sink, her eyes riveted on Chad’s hand, but she ran her fingers along the curved front edge.“ Well, not the broken cupboards but I’m keeping the sink. Becky says it will clean up and I like it; it fits the house.”

His brows rose. “Okay then,” he said with a shrug, “let’s see how wide that hutch is.” He turned and strode back to the living room, Ringo following at his heels.

Her steps dragging, enjoying the help far more than she should and lost in confusing notions about Chad, Julia followed behind him. Giving herself a mental shake, she told herself to pull it together because she required his strength, knowledge, and no-nonsense approach to the project. After all, she certainly had no idea where to start the kitchen reno.

Pulling out the tape, Chad measured across the width then the height of the hutch, then walked past Julia toward the kitchen. She followed, forcing herself to focus only on the furniture.

When she got back to the kitchen, Chad held the tape propped in front of him at hip level with one hand, the yellow steel kinked out and extended to measure along the wall.

His stance was purely male, bringing a completely different visual to Julia’s mind, and it didn’t involve a tape measure.

He glanced up at her then did a double take at her expression. His eyebrows rose a fraction of an inch in question, as if he could hear her hormones screaming.

Embarrassed to be caught with her hand in the proverbial cookie jar, Julia straightened her spine and met his gaze, her chin high, her eyes cool.

As if slapped, the tape measure crinkled to the floor with a clatter and Chad tore his bewildered gaze away from Julia. Shifting his feet to get back on track, he gave the tape a few expert flips and kinks and measured from floor to ceiling and then from the corner of the room to the center of the window.

Feeling surprisingly wretched over dousing the warmth in his eyes when he was just trying to help, Julia retreated a step, rubbing her forehead with her fingertips.

Holding the tape in place again with his hip cocked, trying to explain further, Chad turned to Julia. “As you can see, it’s five-foot six to the center of the window and the sink is thirty-six inches wide. If you divide the sink by half, then the hutch can’t be wider than forty-eight inches or your sink won’t be centered under the window. Problem is, that hutch is just over four foot four.” He gazed at her expectantly, waiting, the tape extending from his hip to the wall, twitching slightly, his expression one of concentration.

Silence filled the room as Julia struggled to focus on Chad’s words, not the stiff steel tape extending across the room from his crotch.

Embarrassed and flustered, Julia licked her lips, then shook her head, once again reining herself in.

His brow lifted, as if he knew she was sexually addled, but had no idea what her problem was.

Awkwardly, she glanced toward the window, then back to Chad. Withdrawing mentally and scolding herself, she attempting to break the spell, but failed miserably. A spark of surprised interest glittered in his eye when their gaze clashed, and that catalyst pushed Julia over the edge. She raised her chin, shuttering her expression once again.

Chad’s presence darkened at her blatant dismissal and the tape measure whirred and clattered back up into the roll in his hand; the connection between them abruptly severed.

About the author:
Kirsten grew up in the Western US and graduated from high school in 1984. She married soon there after and quickly built a family. With three young children and number four on the way, she returned to college in 1992. Her career as a draftsman included many settings ranging from a steel fabrication shops to prestigious engineering firms. Balancing family life with the workplace forced her to become the queen of multitasking. In 2001, bored with the cubical life, she moved on to teach drafting in technical college, then to opening her own consulting firm teaching 3D engineering software. Due to health problems, Kirsten retired in 2012 to travel with her husband for his job. She now works writing romance novels and enjoys spoiling her three grandchildren. Since 2017 Kirsten has lived and worked full time in a 40' travel trailer with her husband and her little dog Bingo.

a Rafflecopter giveaway
Posted by CCAM at 9:38 PM

I am LOVING the cover... It's beautifully designed.... Thanks so much for sharing the excerpt for all of us! :)

I like that all of the covers in this series follow a similar theme. It is easy to know the books are related. Bernie Wallace BWallace1980(at)hotmail(d0t)com

Hometown Girl After All has the best cover in this series.

I love the covers-thanks for the giveaway