no choice but to go rogue - The Devil’s Pact (The Devil’s Revolver #3) by V. S. McGrath

"I found this book to be the most gripping one yet. I think it might've been a little faster-paced, or maybe it had higher stakes and more intensity.Overall, this was another great book in a series that I'm really enjoying with lots of diversity, a motley crew of characters, and a magic-filled Old West setting" Kriste, Goodreads 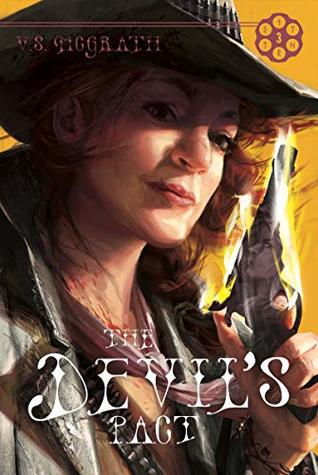 Hold on to your hats — the Devil’s Revolver series is back with an evil twin, deep magic, zombies, menacing grand balls, a train heist, hand-to-hand high-stakes battles, and two sisters who have grown in their power to face and fight the end of the Weird West.

If Hettie Alabama could do what she was told and stand down . . . she might not anyway. Especially when the letters her sister sends from her place of hiding don’t seem quite right, and Hettie’s posse is tying her hands tighter by the day. She’s itching to take the safety off her cursed mage gun, the Devil’s Revolver, and walk through the fire to end the reign of evil that’s choking the magic out of the West—not to mention save her sister once and for all.

The only problem? Hettie’s name is in the headlines and on every wanted poster in the nation—but she’s not the one robbing banks and killing innocents, even if the pictures look just like her. She’s up to her chin in high-necked gowns and beauty glamors, charged with fulfilling her word to the influential Favreau family of New Orleans, even as it becomes increasingly clear that they want only to consolidate the world’s waning magic in the hands of the rich and powerful. The politics get more personal as the most loyal of Hettie’s gang uncover the threat of an immoderate technology that steals magic from the unwitting innocent and transfers it to the nefarious elite.

Hettie has no choice but to go rogue, and when she drops a black hat over her brow, the Devil’s Revolver’s trigger glows hot. The Devil’s Pact stampedes from San Francisco’s Chinatown tongs through the glittering high society of Chicago to the hidden swamps of the Deep South in its search for truth, genuine justice, and an end to a world that refuses to recognize the power and change wrought by girls.

About the author:
Vicki So, writing as V. S. McGrath, is a published romance author (as Vicki Essex) and has six books with Harlequin Superromance: Her Son’s Hero (July 2011); Back to the Good Fortune Diner (January 2013), which was picked for the Smart Bitches Trashy Books Sizzling Book Club; In Her Corner (March 2014); A Recipe for Reunion (March 2015); Red Carpet Arrangement (January 2016); and Matinees with Miriam (November 2016). She lives in Toronto, Canada.