18+ The second book in the trilogy, D’zia’s Dilemma features a disembodied galactic gangster, a snarky spybot, and a sentient, lovesick spaceship. If you like non-stop action, powerful emotions, and sensual aliens, you’ll love the next installment of An Alien Exchange. 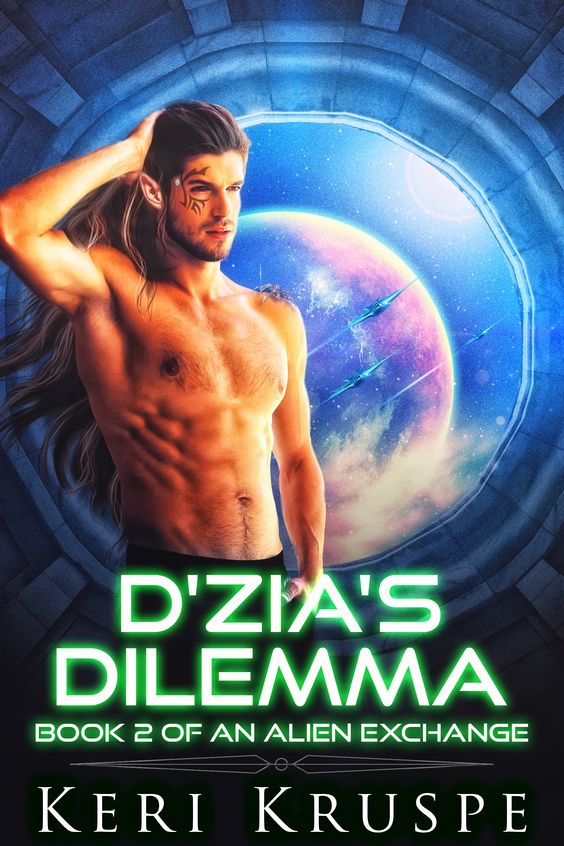 Guardians of the Galaxy meets The Princess Bride.

The second book in the trilogy, D’zia’s Dilemma features a disembodied galactic gangster, a snarky spybot, and a sentient, lovesick spaceship. If you like non-stop action, powerful emotions, and sensual aliens, you’ll love the next installment of An Alien Exchange.

A woman betrayed. An alien duke faced with an impossible decision. Can two lovers who long to be together overcome those determined to keep them apart?

Lora Dharma Callahan excitedly agrees to leave Earth to attend “The Exchange” and meet the alien mate of her dreams. Instead of finding true love, she’s forcibly kidnapped and held captive by an alien lunatic who plans to take over the galaxy. He’s going to use her to create a serum that will ultimately enslave every human female on Earth. But no emperor wannabe is going to keep this girl down. Lora will find a way to save not only herself, but her planet as well.

Duke D’zia Yaq E’etu, cousin to the crown prince of Zerin, suspects a malicious plot to overthrow the galactic government. When the opportunity arises to insinuate himself in the suspected traitor’s stronghold, he doesn’t hesitate to use his infiltration skills. While there, he encounters Lora, whom he soon recognizes as his TrueBond. The only problem…she’s imprisoned and scheduled for experiments that will destroy her.

Now D’zia has a hard choice to make. Should he stay and get the proof he needs to prevent a narcissistic megalomaniac from taking over the galactic government…or escape with the only female he can claim as his own?

She didn’t remember falling. One minute she’d been in the middle of hundreds of bodies, and the next…she was…here.

“Here” was a damp, cobbled floor. The uneven rocks painfully dug into her head, back, and bottom. With a wobbly, shaky breath, she coughed at the moldy smell of rotten eggs. Her tongue was thick and dry as she shivered in the damp air.

Oh, ick! Even her tunic and leggings stuck to her skin.

Okay, time to sit up. After a few pathetic tries, she finally levered her body into an upright position and panted, completely exhausted. Now for the next problem…she couldn’t see anything. It was so black it was hard to tell if her eyes were open. At least nothing hurt, except for her head. Yay for small favors.

She tilted her head at a distant, stomping sound. What was that? Her stomach dropped. Was someone coming?

The blackness eased into a murky gray. Wait, was it getting lighter? She blinked, waiting for her eyes to adjust. The dimness morphed into simple gray as a dull light filtered through the small door window. As the image of her surroundings became clear, she shivered and shut her eyes. Like that was going to help. There was no way to unsee she was in a tiny prison, complete with rock walls slathered in dirt and green slime.

It looked like “Dungeons-R-Us” had a sale and she was the lucky recipient.

About the author:
“Author of otherworldly romantic adventures”, Keri Kruspe has been an author since the age of twelve and has always been fascinated with otherworldly stories that end in Happily Ever After. Her current works, An Alien Exchange trilogy had its first release Winter 2018. The trilogy continues with D’zia’s Dilemma and concludes with Ki’s Redemption — to be released by the first quarter of 2019.

A native Nevadan, Keri resides with her family in the wilds of Northwest Michigan where she enjoys the stark change in seasons and the pleasures each one brings. An avid reader, Keri loves an enjoyable bottle of red wine, a variety of delicious foods and watching action/adventure movies…usually at the same time. You can find her most days immersed in her fantasy world on her latest novel while foot tappin’ to classic rock. When not absorbed in her writing, Keri works alongside her husband in building their dream home or discovering intelligent life in America in their RV.

Wow… thank you for including me on your blog! Since I work full-time, I’ll only be able to make a couple of stops throughout the day to answer any questions or comments. I really appreciate your time, and I’m looking forward to everyone’s response to D’zia’s Dilemma, not only here but also when you leave a review at your favorite retailer. Also, everyone who signs up for my mailing list gets a FREE companion book for the Alien Exchange universe!

Guardians of the Galaxy meets The Princess Bride.
is probably a phrase I thought I'd never hear. Sounds great

Looking forward to reading this trilogy. Thank you

I would really enjoy reading this.

thanks for hosting love the cover

I love the cover it's gorgeous