"The pacing is swift, but not at the expense of story development. The humor is fun even- maybe especially- in the face of tight situations. [...] This was an all-around good time. I continue to look forward to ongoing stories in the Coletti Warlords' universe and thoroughly enjoy the light sci-fi romantic comedy style. I can definitely recommend these to others who want an easy and laugh out loud read along with an alien romance." Sophia, Goodreads 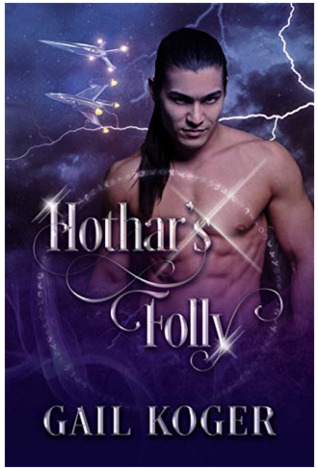 Undercover psychic investigator Casey Jones’ hunt for a traitor in Central Command gets blown all to hell when the crew of the military C130 cargo plane she’s riding on tries to kill her. Drawing on her telekinesis, Casey stops their assassination attempt and bails out as the aircraft goes down in flames.

Casey meets her new partner at eight thousand feet, when Hothar is suddenly wrapped around her like a limpet. He declares he has come to rescue her from a watery death. All the butthead is going to accomplish is getting them both killed. She’s a battle-tested Siren and quite capable of catching the turncoat without his help.

Or maybe not. There’s suddenly a shitload of bad guys trying to kill them. Casey quickly realizes they are an unbeatable team. She’s a bit surprised when the young Coletti warrior brags that he knows how to perform over one hundred sex acts from his mind meld with the Overlord. Does she have a budding Don Juan on her hands? He’s certainly eager to try out every one of those positions. Come to think about it, so is she. But first, they must expose the traitor before billions die.

I surveyed the tiny island and a shudder shook me. Except for the trees full of cane spiders there wasn’t any place for me to change. I jerked my thumb at the warriors. “I don’t want to strip down in front of all of them.”

Uncle Saul turned to the five Coletti warriors who had been following our conversations with great interest. “Check the island for any signs of the Rodan.”

“As you command,” they said in unison, clamped their right arms against their chests and vanished.

I smacked Hothar’s hands as he tried to unbutton my shirt. “I don’t need your help to undress. If you’ll both turn around, I’ll get out of my fat suit.”

“As my lady wishes.” He obediently turned to face the ocean.

As soon as my uncle had his back to me, I kicked my boots off and stripped down. I tugged and tugged on the fat suit’s zipper. The friggin’ thing was glued shut. I yanked and yanked and yanked some more. Since Uncle Saul didn’t like me cussing, I went with, “Son of a monkey. Mothersmucker!” 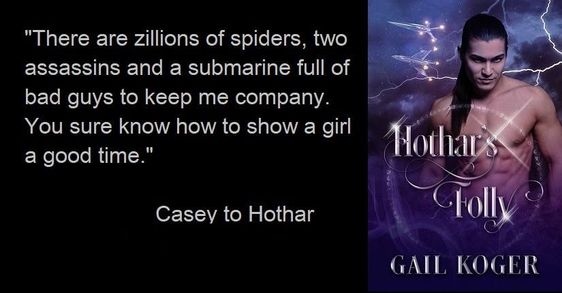 “I do, but don’t you dare laugh at me.”
“We wouldn’t think of it,” Uncle Saul promised solemnly.
“Fine. Get me out of this.”

Both men turned around. There wasn’t a trace of emotion on their faces as they studied the fat suit.

“A very effective disguise.” Hothar glanced at my uncle. “Cut it off?”
Uncle Saul bobbed his head. “I agree.”
They pulled their knives and went to work.

I heard a muffled snicker and looked over my shoulder. Uncle Saul was grinning like a loon. “You promised.”

“Sorry sweetheart, but you gotta admit this is pretty damn funny,” Uncle Saul said. “You resemble the marshmallow man from that silly ghost movie.”

“How was I to know the suit ballooned up in salt water?” I expelled a long breath when the foam rubber concoction fell away. The ocean breeze was pure heaven. “Thank you.”

“You are truly beautiful,” Hothar stated.

The naked desire in Hothar’s eyes had me blushing. “And you win the grand prize for awesome dimples.”

“Knock it off you two.” Uncle Saul’s mouth tightened into a hard line. “Get dressed. The Overlord will be here shortly. He’s anxious to interrogate Jarok.”

My eyes widened in horror. “Do I still look like I have the plague?”

“The Overlord won’t even notice,” Uncle Saul promised, refusing to meet my gaze.

Seriously? My skin was the color of a boiled lobster with pieces of white foam still stuck to it. “What happened with the horrendous space battle?”

“The Overlord,” Hothar said and handed me my clothes.
“Right. The big scary came, saw, and blew them all to hell.” 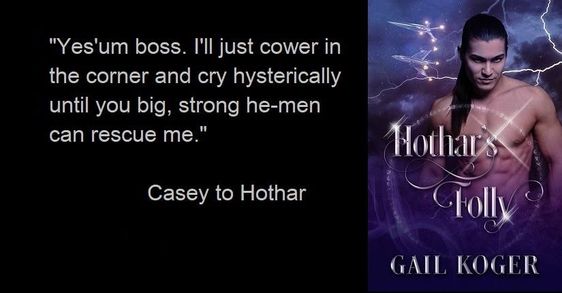 I took one look at the horde of hairy spiders covering Jarok and scrambled up Hothar’s back like it was the Matterhorn. Once I was perched on his shoulder, I cried, “You said cane spiders were harmless.”

“Those are not cane spiders,” Hothar replied, endeavoring to loosen my death grip on his head.
“No shit!”
“Language, young lady,” Uncle Saul warned as he reached up to pull me off Hothar’s shoulders.

Immense power rippled the air around us as the Overlord teleported in.

Zarek’s cold amber gaze examined us and the pieces of my fat suit. He cocked a dark brow. “I cannot wait to hear your explanation.”

I smacked the top of Hothar’s head. “Am not.”
Letting out a sigh, my uncle pointed at Jarok. “Spiders.”
As if on cue, Jarok uttered a bone-chilling shriek.

Zarek took it all in and tapped his warrior’s bracelet. Ten seconds later, the spiders scurried back into the monstrous web.

“You don’t think they ate the other warriors, do you?”
“They did not. I had them teleport back to the ship.” Zarek replied.
“Oh, that’s good.” I released my death grip on Hothar’s head and smoothed his hair down. “Sorry.” 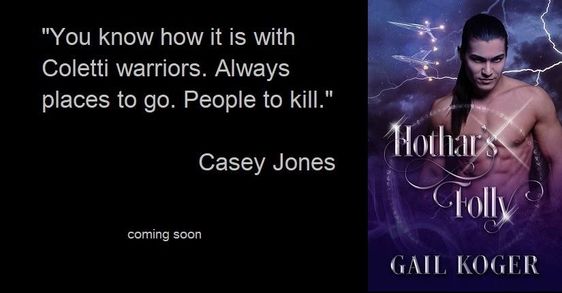 Uncle Saul plucked me off Hothar’s shoulders. “You should be.”

“Before you return Casey to the ship, make sure she is dressed. My crew knows she is your daughter General, and Jones females are highly sought after.”
“Casey is mine,” Hothar growled, a hand on his sword.

An aura of sheer menace radiated from Zarek. “Are you challenging me?”

Wazzock’s piss! I jumped in front of Hothar. “No! He’s not. He’s annoyed that Waewae got away. We all are. Annoyed. That is.” There was no way in hell I wanted the two of them fighting. It would get messy. Really messy and for some darn reason I couldn’t let Zarek hurt or kill Hothar. What was up with that?

All the Overlord’s terrifying power was suddenly wrapped around me and I flinched when he started mucking about in my head. How had he gotten through my shields? Using every trick Quinn had taught me I tried to evict him, but nothing worked.

Zarek’s deadly voice sounded in my mind. “You wouldn’t let me harm Hothar?”

“No, sir.”
“How did you plan on stopping me?”
“I’d keep dumping you in the ocean until you cooled down.”
Zarek leaned down and whispered in my ear. “It wouldn’t have worked.”

About the author:
How do I come up with my stories? Being psychotic helps. I was a 9-1-1 dispatcher for way too long. All those years of wild requests, screwy questions, bizarre behavior and outrageous demands have left me with a permanent twitch and an uncontrollable craving for chocolate. Don’t get me wrong. Working as a 9-1-1 dispatcher can be very rewarding. BUT - some days I felt like the entire world was nuts. I mean, c’mon, who in their right mind calls 9-1-1 for the winning lottery numbers? To keep from hitting myself repeatedly in the head with my phone, I took up writing.

I made the Night Owl's Awesome Paranormal Romance Authors List. 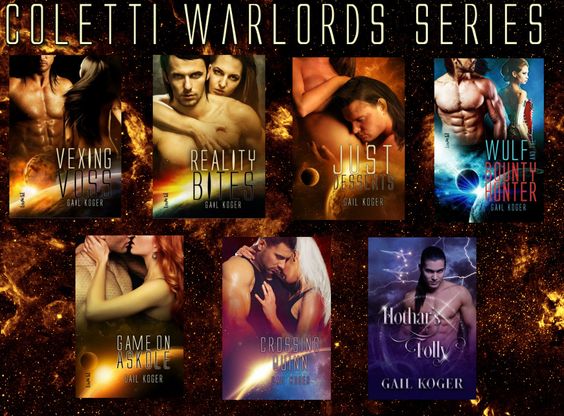 I enjoyed reading the featured review, description and excerpt. Sounds like a good read.

This is my favorite line: “You are my heart, my soul, my life. You call to me like no other. I need your touch to live. Hothar’s Folly, romance Coletti style!

Thanks for stopping by. I had a lot of fun writing his book.

I have to tell my sister about this series. We both love the genre!

I am new to this author, but I really want to read their work. I enjoyed this post a lot. (jozywails@gmail.com)

It sounds like a riveting story! Looking forward to reading it!
digicats {at} sbcglobal {dot} net

If you like to laugh, love a snarky heroine, action-packed story and yummy warlords, this is the book for you.

I've read several of Gail's books, and they have all been just so fun! Fast-paced, plenty of laugh-out-loud moments but enough intensity to make them true sci-fi romances!

I think the cover looks great.

I love the cover and look forward to reading it.

Gorgeous covers! I really need to start reading this series!