"The author gives an amazing sense of possibility by tapping into the gritty details of his own experience, and the reality of what is involved by taking such a trip.
Overall, I feel that Tailwinds Past Florence is a book that would appeal to most, regardless of their home genre. It is a book that is easy to relate to thanks to the rich characterization, while also sharing the journey of a lifetime. " Sandra, Goodreads 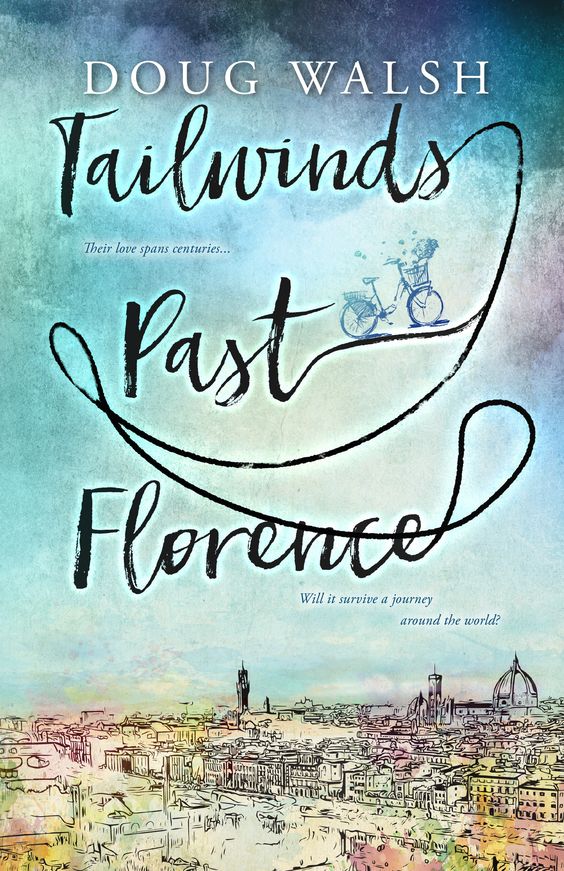 After getting blacklisted from the venture capital industry, twenty-nine-year-old Edward Vaughan will do anything to avoid telling his wife what happened. Even if it means agreeing to her dream of bicycling around the world. Kara, tired of being married to a workaholic, was readying for a divorce. Now, she’s packing bags of a different kind. Together, they pedal away from Seattle, headed east on the open road across America, Europe, and beyond.

Theirs is a decision that reverberates across centuries, shattering a continuum that bound their souls throughout time, and traps Edward in a battle with a past life over an eternal love.

As the miles roll by, and the couple's sordid secrets begin to surface, the couple encounters several men plucked from history, each one a vessel of Edward’s soul in a prior life. Of them, a 19th century art dealer proves dangerous, believing Kara is his ticket back to the past.

Tailwinds Past Florence is a contemporary love story with a magical twist, landing readers in the saddle of a global bicycle adventure.

With no kids on the horizon or in-laws willing to travel all that way, the second bedroom had become a land of forgotten hobbies. Dust-covered mountain bikes leaned where a dresser may have stood, a paint-splattered drop cloth took the place of a guest bed, an empty easel in lieu of a mirror.

As he rose from picking up the shoe, an unexpected absence caught his eye. The map was gone. For months it had hung opposite the door, above a bookcase lined with old college texts and a copious collection of brushes and paint tubes. Now, in its stead, only thumbtack holes in the same not-quite-white (Kara called it Saffron Lace) that covered every wall in their Seattle apartment.

She brought the map home last fall, a laminated Rand-McNally depicting every country on earth in shaded relief. Accompanying it was a proposal to bicycle around the world. She wanted him to take a sabbatical—a laughable notion in the world of venture capital—and spend a year or three traveling.

Issues of Adventure Cyclist appeared in the bathroom soon after, borrowed travel guides rotated across her nightstand, and seemingly every conversation held an air of wanderlust, with Kara pining for small towns and country roads, campfire beers at sunset. Just the two of us, she’d say in a coquettish whisper. While we’re still young. Edward could only guess what spurred her restlessness and expected it to vanish as abruptly as it emerged.

The map hadn’t gone far. A quick search found it crunched into a football of discarded fantasy, punted behind a pile of bags and boxes. By the looks of things, she’d cleaned out the closet.

He unfurled the map, exposing a runaway squiggle of black ink. His eyes locked on the map’s northwest corner, where a star marked the departure point. Home. From there, the line dipped and danced across the northern United States and Canada before dashing south from London to Spain. Onward it went, around the Mediterranean to Greece, Turkey, and beyond. Edward followed the trail, past a who’s who of countries he knew nothing about, to China and Vietnam and a hand-drawn smiley face clear on the other edge of the poster, in Bali.

About the author:
Doug Walsh made his fiction debut with Tailwinds Past Florence, a road-tripping love story with a magical twist, inspired by the two years he spent cycling the world. The novel was a prizewinner in the PNWA Literary Contest. He's also authored One Lousy Pirate, a travel memoir, and over one hundred officially-licensed video game strategy guides. Travel guides to fictitious places, as he likes to call them. Originally from New Jersey, he now lives and plays in the mountains of western Washington.

Hi, This is Doug Walsh, the author of Tailwinds Past Florence. Thank you for hosting me on the virtual tour.

I'll be checking in throughout the day to answer any questions anyone has, so keep 'em coming.

I would love to travel around the world but not bicycling

What a interesting sounding book

Thanks for the comments, everyone. I do hope it ends up on your TBR.

Katieoscarlet: there's a level of discomfort that is certainly not for everyone (I don't believe I would attempt it again) but there's also a beauty in the way it forces you onto backroads, to go only 50-60 miles a day, and to travel at a speed that really lets you feel and understand the landscape. It's tough, but it's wonderful.

This book sounds like a fantastic read. Very pretty cover!