courtesy of a twisted mind... Scenes of Mild Peril by David Court

"It is disturbing.It is chilling.
It is exhausting.
It is a must have and a must read." - Lisa, Goodreads 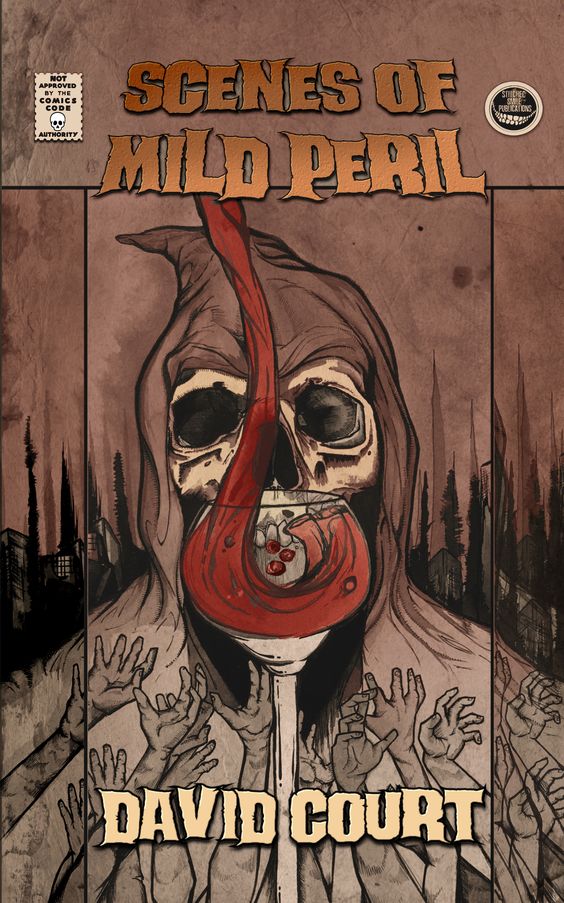 Across thirty disquieting stories, we'll encounter such tales as, "Sovereign's Last Hurrah", featuring a team of retired super-powered villains embarking on one last caper with their legendary super-hero rival.

"A Comedian Walks into a Bar", in which a hungry and ambitious amateur learns that the fabled secret of comedy may come at too high a cost. "83", where the interview for a dream job becomes a nightmare, and "In Vino Veritas, In Vino Mors", where a dying wine collector takes part in a very special tasting session, courtesy of a very special visitor.

EXCERPTs
also check out these podcasts: Tales to Terrify 289 and 250

In Vino Veritas, In Vino Mors

To hear him tell his tales was to be there yourself. Here was I, a being considerably older than Albarossa, who had only seen a fraction of the world—both known and unknown—in comparison. He spoke of sentient fungi from different worlds (whose tubers could be distilled into quite a reasonably flavoured spirit, apparently) in the same breath that he’d talk about the complexity of finding and fermenting mandrake roots (blending them with honey and molasses was one of his trade secrets). He’d stolen fruits and herbs with mystical powers from kings, barons, and holy men and had fought with ghosts, ghouls, and formless things with unpronounceable names. The evening flew by as more bottles from his exquisite collection were opened and openly quaffed—each bottle had an origin story as delicious and as addictive as the drink itself.

On a sliding scale from zero to catastrophe, this was pretty much off the scale. On a particularly quiet day at the helm, he’d gone to the trouble of working it out. At the end of his calculations, he had confirmed his suspicions—nearly eighty percent of the rules and guidelines in the Navy Spacefaring manual could be summed up in two simple words.

About the author:
David Court is a short story author and novelist, whose works have appeared in over a dozen venues including Tales to Terrify, Strangely Funny, Fears Accomplice and The Voices Within. Whilst primarily a horror writer, he also writes science fiction, poetry and satire.

His writing style has been described as "Darkly cynical" and "Quirky and highly readable" and David can't bring himself to disagree with either of those statements.

Growing up in the UK in the eighties, David's earliest influences were the books of Stephen King and Clive Barker, and the films of John Carpenter and George Romero. The first wave of Video Nasties may also have had a profound effect on his psyche.

As well as being a proud VIP writer for Stitched Smile Publications, David works as a Software Developer and lives in Coventry with his wife, three cats and an ever-growing beard. David's wife once asked him if he'd write about how great she was. David replied that he would, because he specialized in short fiction. Despite that, they are still married.

Hope your readers enjoy it!

The cover is AWESOME! According to the goodreads review its a disturbing and chilling read which fits that cover. I am definitely looking forward to reading this one.

What a interesting cover

I like the cover. It is very unique and adds a bit of mystery to the book. Congrats on the release. Bernie Wallace BWallace1980(at)hotmail(d0t)com

These sound wicked fun and that cover is a work of art!

The cover guves me this old mtv creepy feel and I like it.