It draws to an end! Plagued Primortus (The Primortus Chronicles #3) by J.L. Bond & Val Richards

With the help of her squad, a Shifter, a Seer, and a Reaper, Skylee finally learns the truth about the Prophecy and why she alone must vanquish Brinfrost before he destroys them all. But does the Second Born have the strength to fulfill her destiny? 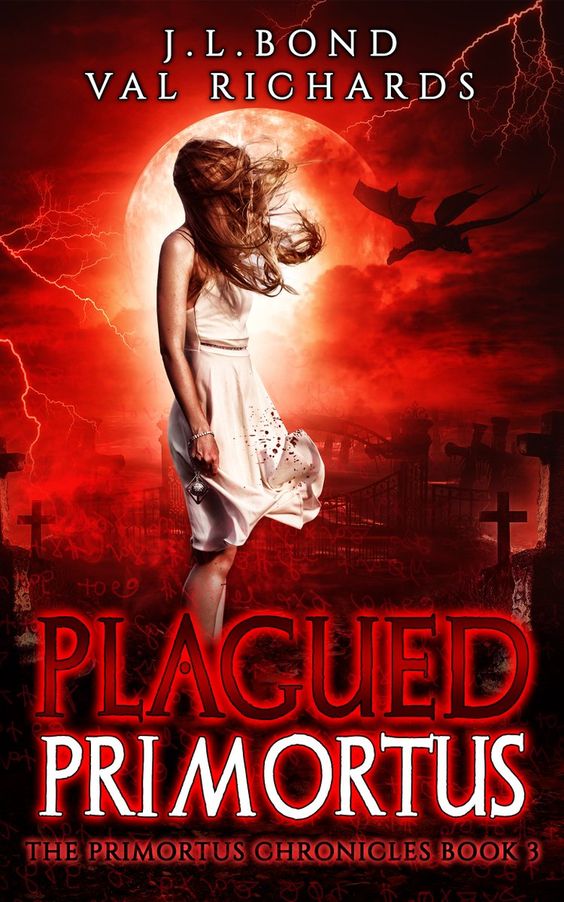 It draws to an end!

Follow the Second Born, a fifteen-year-old girl named Skylee Porter, as she faces the terrifying virus and the evil forces that brought it down upon her world. While the plague rages, Skylee and her sister, Chrism, form a bond to defeat the enemy threatening Frogwhistles School. In the midst of the Dark War, can Sky and Will’s forbidden love survive? How will they and Chrism overcome the betrayal of Airon? Heart-wrenching choices must be made to right the wrongs of the past.

With the help of her squad, a Shifter, a Seer, and a Reaper, Skylee finally learns the truth about the Prophecy and why she alone must vanquish Brinfrost before he destroys them all. But does the Second Born have the strength to fulfill her destiny?

The Eleventh Elementum is missing. The Magical Humusara is cautioning. The Crystal Plague is looming. Things are about to get deeper…darker…deadlier!

An hour and a half later, Skylee, Chrism, and Vangie were creeping along a dark corridor. The three girls were dressed from head to toe in dark clothing. They didn’t speak a word as they zigzagged across the broken cement, snuck past a line of empty transport-gliders, and entered the chemical plant. As it turned out, following an Arcamentum was a lot harder than it sounded. In fact, Vangie had transported them halfway around the globe to get to their current location in Houston, Texas.
The factory reminded Skylee of a spooky virtual game Will and Airon used to play with killer zombies and lots of blood and guts. She led her Helpmates farther into the structure, gazing around at the grey concrete walls, which surrounded them like a grim tomb. Above, a maze of corroded pipes rumbled and hissed loudly. Bare light bulbs dangled from the ceiling, casting a dull yellow glow on what seemed like an endless row of rusty metal doors. She suddenly realized the noisy pipes and working lights meant Brinfrost could be near since his control over manmade objects probably included electrical power.
“Stay on your toes,” Skylee told the other girls. “Things could get hairy.”
She took a deep breath to steady herself and a horrible odor invaded her senses. The smell of toxic chemicals mingled with the unmistakable stench of death. Her eyes watered, and she fought back an urge to gag. As if that wasn’t enough, heavy tension hung in the air.
To Skylee’s dismay, animosity was festering between her Helpmates. She had been told all about Chrism and Archer’s squabble. At first, she tried to downplay it and smooth things over, hoping the girls could settle their differences. But neither was in the mood to bury the hatchet. Unless it’s in each other’s back. So, she decided to distract them and set out following the Arcamentum. Bringing Archer along was out of the question.
“Hey,” said Skylee, glancing down at the silver arrow. “It’s pointing that way.” She turned left into a darker hallway. “I have a feeling we’re getting close.”
“Close to what?” Chrism scoffed. “I can’t believe that thing has led us to another stinking cesspool.”
“Quit complaining and just keep moving,” ordered Vangie. She hooked her thumbs under the straps of her backpack and picked up her pace.
Chrism shot her a fiery look and turned to Skylee. “Who died and left the dork in charge?”
“Okay, you two, be sweet,” she replied, trying to keep things from escalating. Sheesh, of all times my Helpmates had to pick tonight to have a meltdown.
To be perfectly honest, she understood why Vangie was upset with her sister. Threatening Archer was crossing the line as was him brandishing his bow and arrow. Still, Skylee couldn’t help but remember how cruel Chrism had been in the beginning. Everything changed when she became a Shifter. But lately, her sister had been reverting to her old ways. A result of having her heart handed to her on a platter.  If I ever find Airon, I’m gonna thank him…with a punch in the gut.
Vangie, who was walking slightly ahead, stopped short and shuddered. “Whoa, do you see that?” She pointed up at the concrete wall. It was covered in graffiti. A line of large exaggerated letters spelled out Haunted Smokestacks. Below that in smaller crudely scrawled letters, it said:

Death is Coming
Turn Back

“Well, that’s not creepy at all,” said Chrism.
“Is that blood?” Skylee asked. She immediately thought of Brinfrost’s obsession with it.
Her sister let out a small gulp. “If you get me killed in this terrible dump, I’m gonna haunt you for the rest of your life.”
“Shhh…listen,” said Vangie.
“Don’t shush me,” Chrism snapped back.
“But I...I think I heard something,” she replied, gazing around cautiously. “Did you guys?”
Skylee cocked her head to the side, listening. “Someone’s whistling.”
“Not good,” whispered Chrism as her eyes went wide.
A chill ran down Skylee’s spine, but she refused to give in to her fears. “Well, it is kind of good.” She looked down at the arrow, which was aimed in the direction of the high-pitched tune. “I think this thing actually found Brinfrost.” Her heart thumped wildly in her chest.
“Okay, now we know it works,” Chrism muttered. “Let’s go get more help.”
Skylee shook her head. “First, we need to be sure it’s really him, then we’ll gather the troops.” Neither Chrism nor Vangie spoke, so she crept forward with her Helpmates slinking slowly after her. Of course, she knew it wasn’t the brightest thing to do, but the Arcamentum had once belonged to her father. It wouldn’t lead us into danger…would it? She wanted to have faith it in.
All of a sudden, the whistling stopped.
The three girls froze. The pipes sputtered and creaked above them, but there were no other sounds. They finally moved on with the arrow pointing them through a labyrinth of passageways. A few minutes later, it brought them to a set of dilapidated elevators.
“Yikes,” whispered Chrism. “I feel like I’m in a horror movie. We’re not gonna get in one of those…are we?”
“Course not,” Vangie calmly replied. “We can take the stairs—I mean, if we need to go to a different floor.”
Chrism furrowed her brows. “That arrow doesn’t point up or down. So, how will we know?”
“Yeah, it’s a challenge,” Skylee replied as she rounded the corner in search of the stairway. “We’ll just have to try a floor at a time.”
As the girls entered another hallway, they came upon a row of hover-gurneys. Ghostly white body parts, partly draped in dingy sheets, were piled on top.
Chrism recoiled in shock. “Are those real?”
“No, no way,” murmured Skylee, inching forward guardedly. “They can’t be.” Holding her breath, she reached out and touched an arm sticking out from the covers. “Whoa...it’s hard and cold. Could these be android parts?”
“Don’t think so.” Vangie stepped up and pulled back the sheet. “There aren’t any wires or cables or anything.”
“Ewww,” said Chrism as she wrinkled her nose. “So, this is where that smell is coming from. Why are they all cut up?”
“I don’t know,” replied Skylee, feeling a little queasy. “There’s no blood...”
Vangie picked up a severed hand. “It sure looks human—skin, muscles, and bones. Only, it’s like something has fused it all together.” She studied the exposed wrist carefully. “What would cause this?”
“Would you stop touching it!” Chrism exclaimed in a whisper. “It’s so gross.”
“Fine.” Vangie turned away from her. She slipped off her backpack, unzipped it, and looked inside.
Skylee watched her drop the severed hand into her bag. What is she planning to do with that? Before she could ask, Vangie held up her finger, gesturing to keep it secret.
Skylee nodded. One thing she knew about her Reaper—she always had a plan. Whether it was due to her Spiritus abilities or because of her loss on The Day, Vangie had a logical way of looking at life…and death for that matter.
Maybe because Vangie parents were killed when she was just four. Their remains were found, holding hands, beneath the rubble of the Lodge at Yosemite National Park. Her father, Evan Graves, had been Lee Porter’s Seer.
Thankfully, Vangie survived The Day because she was with her grandparents in Oregon. But a year later, her grandmother died in the aftermath. So, her grandpa, who she lovingly called Gramps, raised her alone. He passed away a month ago at the age of eighty-seven, leaving Vangie with no living relatives.
“Can we please just get out of here?” asked Chrism, interrupting Skylee’s thoughts. “I don’t like the idea of hanging around a place called Haunted Smokestacks.”
Skylee lifted her brows. “You know, we might find Airon.” As soon as she said it, she felt awful about using her sister’s feelings against her.
Chrism let out a huff. “Okay…okay.”
Just then, a faint male voice called out, “Help me...”
All three girls turned and stared down the dark corridor.

J.L. Bondgrew up in a military family and developed her love for adventurous travel early in life. She has lived in five states and internationally in Germany and Hong Kong. After writing a few plays and musical lyrics, J. L. began blogging in 2005 while on an “around the world” trip, visiting twenty-one countries. Contrary to popular belief, she is not related to that other J. Bond, nor is she in the witness protection program. Currently, she finds inspiration for her adventure stories from the tropical setting of her home in Florida.

Val Richards is an author, administrative assistant, mother, teacher without a classroom, and a space traveler wanna be. Because of her busy lifestyle, Val just cannot find the time to become an astronaut. Hence, she travels to other worlds through her imagination. She lived most of her life in the rolling hills of Tennessee but decided she needed majestic oceans to fuel her inspiration. She now resides in sunny Florida where creativity abounds.

Thank you for sharing your book with us. I always look forward to finding out about another great read.

sounds like an excellent read. Love the dark and deadly type of reads.

Really great cover and I loved the excerpt, thanks for sharing :)

I love the pretty book covers! Looking forward to reading the books. Thank you

What a great cover.

This book sounds like a very intriguing read. And I can't wait to check it out.

I enjoyed reading the excerpt. I am unfamiliar with series and I find it intriguing. Good luck with the book.

I like the book cover design. The story description make me think that this will be a good fantasy adventure.