Will they accept their destiny? The Sea Archer (The Heaven & Earth ) by Jeny Heckman

Raven Hunter, a musical prodigy, flees to the Hawaiian Islands to pick up the pieces after her marriage to her manager collapses. Instead, she experiences extraordinary and unsettling events that are beyond her understanding. 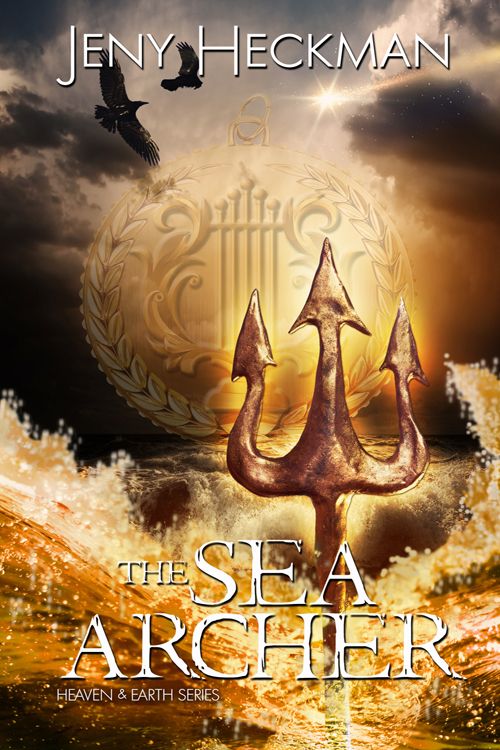 Raven Hunter, a musical prodigy, flees to the Hawaiian Islands to pick up the pieces after her marriage to her manager collapses. Instead, she experiences extraordinary and unsettling events that are beyond her understanding.

Living in paradise, marine biologist, Finn Taylor has the unconscious but effortless ability to understand the needs of the animals he cares for. His playboy lifestyle is most men's fantasy. That is, until the night he meets the shy and elusive new island resident. Suddenly his life no longer feels like his own.

The attraction is undeniable. However, vastly contrasting lives, peculiar dreams, and an unbelievable proclamation that they could be the direct descendants of Poseidon and Apollo threaten to divide them forever. Will they accept their destiny and begin the quest of a lifetime or will they remain in their comfortable yet separate existence?

Greek mythology IS a source of inspiration and there are so many pros and cons to it as a writer. I believe the reason it’s survived so long is that they have a little bit of everything. There’s action and adventure, mystery, a little sci-fi, family, romance, drama, erotica and even a little LGBQT. The primary inspiration, for me anyway, is that the gods are so perfectly flawed. They’re kind of arrogant and spoiled, without a clue of what’s important or how things work in the worlds they reign over.

The Greek gods are still revered by many today as their religion. I think because so many people follow them and their stories, you must be careful as a writer. You must pick what you take creative license with because those that are students of Greek mythology will know and point it out to you.

For instance, Cronus and Kronos are in many ways the same but one is Greek, and one is Roman. One is the god of harvest and the other god of time. Taking a little creative license, I combined these two together. Is that technically correct, no. Will someone point it out to me, yes. However, it’s something that could be believable because Greek and Roman gods share names, occupations, talent, magic, etc. and it’s believable that the gods can cross those barriers.

The pros of writing about the Greeks are in that same vein. The stories are so fantastical. You’re able to create elaborate scenes you could imagine happening in the everyday life of a Greek god. So, maybe it’s not a story that was written down for posterity’s sake but a kind of behind-the-scenes peek or glimpse into their lives.

The reason I wanted to do a series on the Greek gods is two-fold. The first is because I enjoyed the stories when I initially learned about them as a teenager, I realized they could be dynamic, interesting and unique. Second, I liked the idea of not writing about vampires, werewolves or witches and wanted to do something a little different.

Thank you so much to Mythical Books for hosting me today, I appreciate it so much and thank you to the readers for stopping by, and I sincerely hope you enjoy, The Sea Archer.

About the author:
Jeny Heckman loves romance. She especially loves romance with a paranormal and/or historical twist. When not ignoring her family and friends by writing you will find her time exclusively on them and photography. Jeny lives in Stanwood, Washington.

Great post and I appreciate getting to find out about another great book. Thanks for all you do and for the hard work you put into this. Greatly appreciated!

thanks the excerpt sounds interesting

Hi Joseph!
It took me about four months to write it and then quite a bit longer for the edits and re-writes. So, about a year from start to finish! Thank you so much for stopping by, I really appreciate it!
Cheers!
Jeny

I would love to give a huge shout out to Mythical Books for hosting me today. It’s been a lot of fun!
I really appreciated the time you devoted to a new author. Thank you!

I would love to read your book , and great cover.

Enjoyed the guest post and love the cover. Good luck with the book.

Thank you so much everyone! I hope you give it a read and Happy Holidays!! Cheers!

Thanks for hosting the book. I look forward to this book.